I took this photo on the Buda side of the Danube in the Hungarian capital – something about the grandeur of the building behind its metal exo-skeleton caught my eye. It made me wonder who was inside, whether they too were a faded beauty – a relic from another era shored up by modern ugliness.

Are they contented in their situation, or mourning the savage socialist years that still mark the city?

Your challenge is to take this idea and run with it – write a piece inspired by the mix of elegance and necessity, age and modernity, and make of it what you wish. 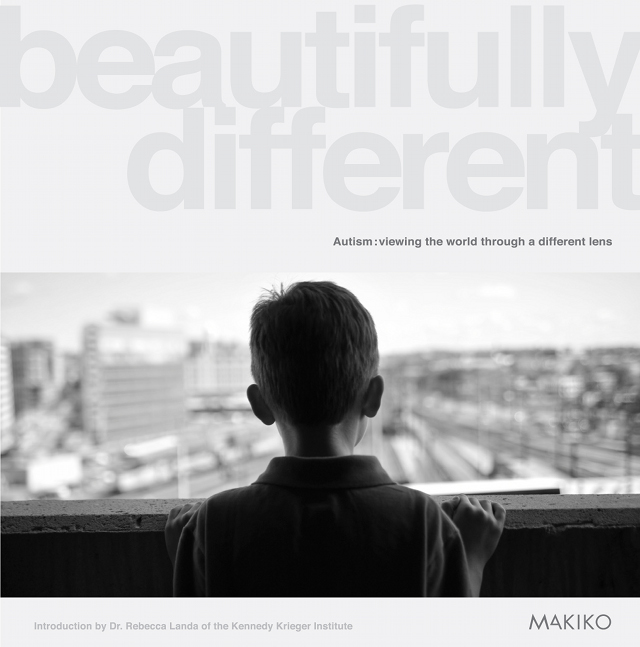 With exquisitely shot photographs, information-filled chapters and commentaries both from autistic children and their parents, this is that rare thing – a universal and yet deeply personal insight into the experience of life on the spectrum.

The book is a collaborative effort between photographer Makiko, Dr. Rebecca Landa at the Kennedy Krieger Institute in the USA, and the parents of children treated at the Institute.

While described as a photographic book, the compelling images take up far fewer of the pages that I expected, and I would have loved to see more. Instead we’re presented with interviews presenting different views of autism, most notably a q&a with Chase, an autism activist who speaks eloquently about his experiences of diagnosis, social marginalisation, friendships, and his future plans. It reveals the strength and joy he finds in his own company as well as the heartbreaking lament that haunts the boy so much of the time: “What did I do wrong?”

It’s a message that rings out clearly from the pages, that these children, through being different, having different responses to the expected ones, risk being made to feel ‘wrong’ simply for being themselves.

When he’s alone, Chase says: “I don’t have to play rules […] I will go out and find the excitement on my own.” Effectively, for Chase, being with others is far lonelier than being left to his own company.

It helped me to glimpse the richness children in the spectrum gain from the world around them – and to understand that they can enjoy exploring their fascinations, with numbers, nature, music, architecture, with the same depth of pleasure we may gain from spending time with others.

One of these interests highlighted in the book is Ben’s ‘obsession’ with lighthouses, which contrasts sharply with his brother Alex’s (also autistic) dread of heights. It begins with the boys’ mother overcoming her own vertigo  as she follows Ben’s race up the lighthouse stairs, emerging with her legs “shaking from the stress of the climb.” It’s a magical moment as she sees, and shares, her son’s happiness. “It was infectious. The moment was worth more than the fear I had overcome.”

The next challenge, encouraging Alex to ascend a lighthouse, is far more difficult, and takes many more lighthouses. Eventually, they succeed and he’s as awestruck as his brother. “Take the time to join your child in his world,” says their mother, “and you may be surprised that eventually you will find the strength and tenacity to pull your child out of their world and into yours, no matter how briefly.”

For me that’s the power at the heart of this book. It’s not about changing or ‘curing’ children with autism, it’s about understanding them and what they present you with, and finding ways to engage with them, or help them engage with you.

While I would have preferred the different elements of each child’s story to be presented together, so that the parents’ insights came alongside the images and diary entries from the children, these separate sections each layer up to a vivid whole that will draw you into the world and lives of these children – not wrong, but beautifully, wonderfully and sometimes awe-inspiringly different.

Beautifully Different: Autism: Viewing the World Through a Different Lens is published by Matador and is available to buy from Amazon. 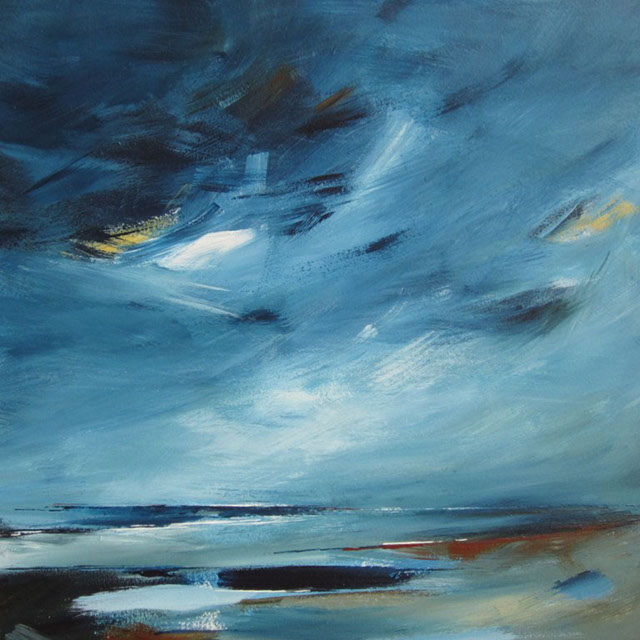 Autumn’s rain and wind are definitely enhanced by a coastal backdrop. That raw, reckless energy smashing itself against the rocks – extraordinary.

Karen George manages to capture the feel of this in her seascapes. Far from tranquil, these beach and headland scenes are moody and wild – and I love them.

Unexpectedly, Karen’s interest in art began in far more academic and scientific grounding, as she studied architecture before moving onto product design.

“At school I enjoyed Biology and Art in equal measure,” she explains, “When I was looking at courses to study I found a ‘Landscape Design and Plant Science’ course at Sheffield University, which then led me to an MA in Landscape Architecture.” 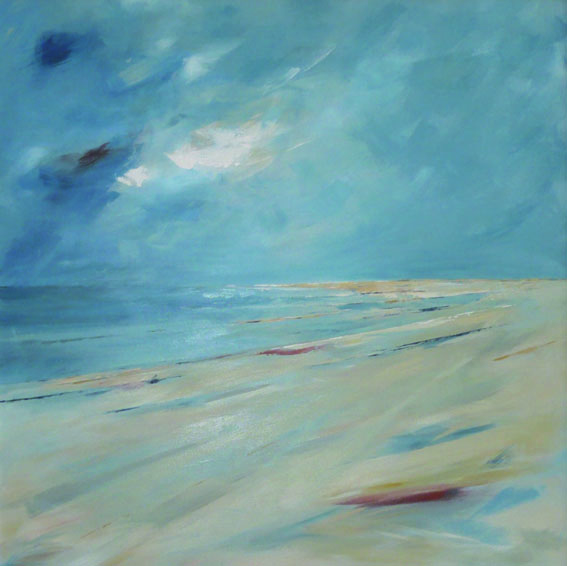 The leap into product design came about from a practical prompt when she had her second daughter, and began taking her baby with her to the allotment. “I was inspired by necessity to create a sunshade that met my needs,” she recalls. “I was always making things at home so it seemed a natural thing to do. It was only when people stopped me in the street to ask where they could buy one that I decided to launch the BuggySail – so the move into product design was accidental.”

With the product an instant success, Karen embraced product design for a time, before realising she relished “the creating’ more than the marketing. After attending an ‘Experimental painting’ workshop I spent more and more time painting.” 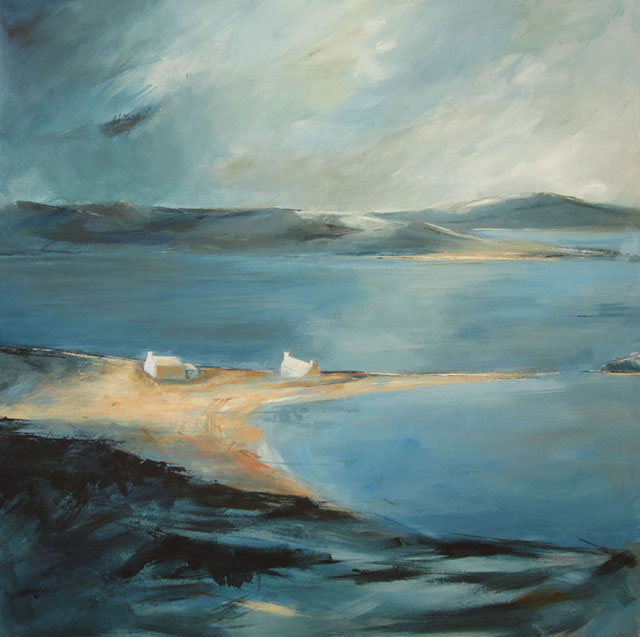 These two elements of Karen’s experience feed into her fine art in subtle but far-reaching ways.

“It’s not something I’ve really thought about before, but with Landscape Architecture you have to be able to imagine the end design and transpose that onto paper,” she says. “This really helped with the product design – creating a mock up of the product to create a pattern. How my painting has been influenced is a little more ambiguous. I enjoy leading the eye through a painting with the use of light and capturing an energy into a painting – both aspects of which are important in design.” 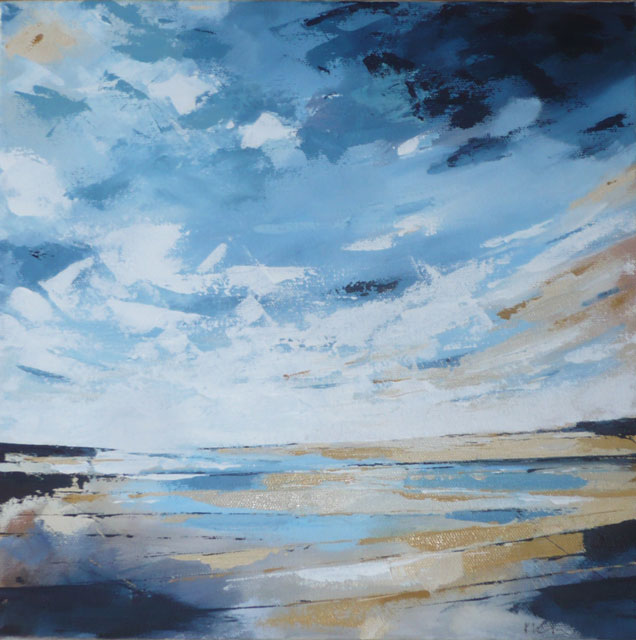 I think that may be why and how Karen’s paintings offer up an almost visceral sense of being close to the power of waves and tides. “In any environment it’s good to give a space a sense of belonging – being a place you enjoy being in and travelling through,” she says. “I hope people enjoy my paintings much the same way.”

For Karen, however, the perfect day at the beach is a lot more serene than you might think from gazing at her paintings. “Not many people.  Not too windy.  Not too hot.  A bit of rock pooling and a good book with the sound of the waves in the background.”

Karen will be exhibiting her artwork at in the Jarman Hall of Totterdown Baptist Church as part of Totterdown Front Room Art Trail 2014. 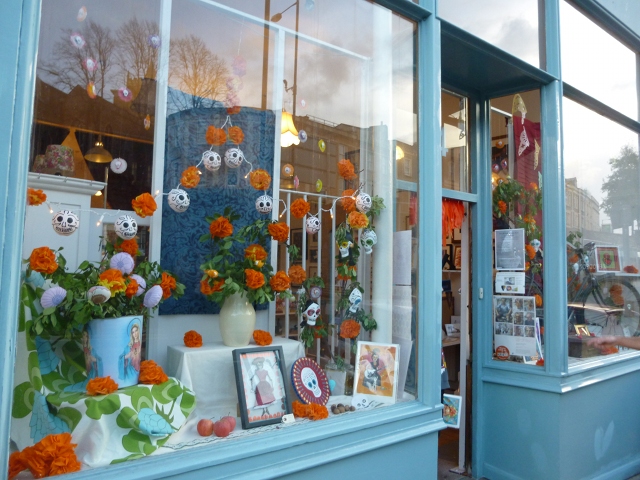 Two rather nice literary things happened last week. The first was that the marvellous folks at Liars’ League Leicester posted their recording of actress Helen Vye-Francis doing a fabulous job of reading out my short story Wee Glory Boy.

Helen got the accents and emotions spot on – I definitely recommend watching it if you have 7.29 minutes to spare, and not just because I wrote it. There’s something magical for me about hearing my characters’ words in someone else mouth, which only adds to my enjoyment of Helen’s performance.

The second thing is that gorgeous artists’ collective Blaze Studio (pictured at the top of this post in all their Day of the Dead finery) agreed to stock my short story collection Remember Me To The Bees. Lucy put some effort into arranging the copies prettily and attaching the bees I’d brought for the purpose, cut from an early, unproofed copy of the book. 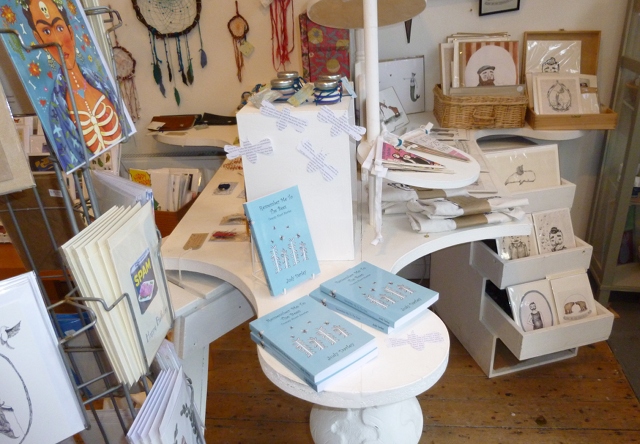 I think the collection looks right at home there, surrounded by curious and lovely works of art. If you’re passing Colston Street in Bristol, pop in and take a look for yourself!

Ooh, and tomorrow from midday you can hear me on Ujima Radio, when I will be chatting to DJ Cheryl Morgan about my writing and multi-arts interests. So tune in to 98FM!