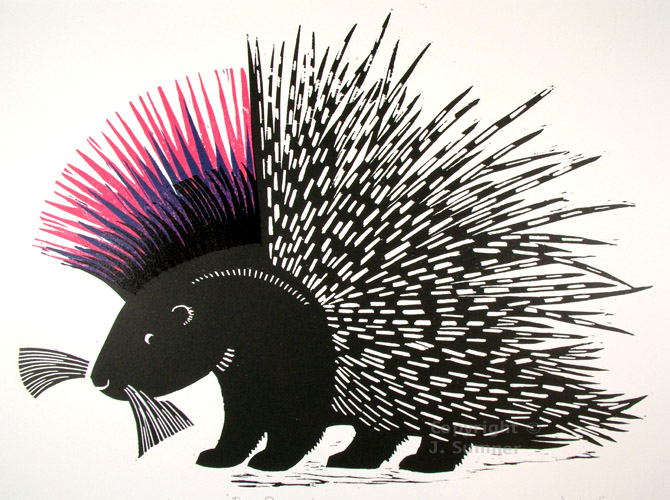 Printmaker and illustrator Josephine Sumner brings a splash of fun and colour to the world with her creations. From the savannahs to the jungles to the misty mountains, her animal prints fizz with energy, and a reminder of how extraordinary our planet is. Her abstract artworks are equally alive, providing a sideways glance at our history as many of them sprang from a fascination with archaeology.

Josephine’s initial artistic explorations began with a childhood attraction “to colour and shape and wanting to draw. Even as a toddler I was fervently scribbling. At school I used to illustrate all my stories and loved creating handwritten books and diaries.”

After leaving school, Josephine attended art college, where she studied graphic design. “This was an obvious choice for me, as I am drawn to the elements of design such as composition, colour, imagery and typography and making them work together,” she says. “However, I also loved making images and after a few years of being a graphic designer, I made a choice and turned to illustration full time. I worked as a general illustrator for quite a while, which then eventually led to printmaking in more recent years.” 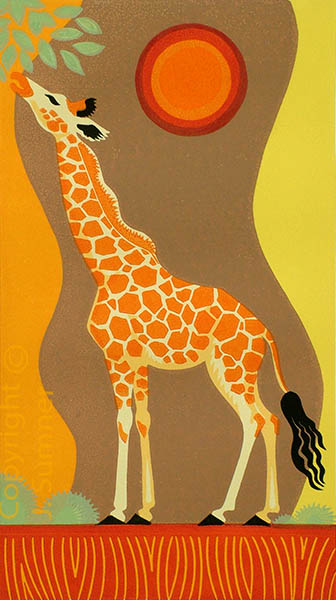 Jospehine’s vivid animal prints particularly appeal to me, offering such a vivid glimpse of the diversity of life. “I’ve always been interested in the natural world, but my animal prints really got started when I was looking through an old children’s annual from the 1950s,” she explains. “It had a series of delicate and beautifully observed watercolour illustrations by Maurice Wilson of different types of monkeys. I was instantly inspired by them and they led me to produce a couple of small linocut prints of two species of monkey.”

In 2007, one of these was accepted for the Royal Academy Summer Exhibition in London, “which was a great shock to me, not least because it was the first time I had entered a piece of work to the show. After that, there was no turning back!”

Each of her animal prints explores different elements. “I look for colours and shape, and try to convey something of the animal’s character,” she says. “Sometimes I can’t resist having a bit of fun with them like the Punky Porcupine.”

Other visual influences include ethnic art and textiles. “I also love the styles of 1920s and 30s and I am technically impressed with wood engraving and Japanese woodcuts.”

While it’s impossible to choose a favourite among her menagerie, Josephine admits to “a fondness for those which make me smile.” (I think that’s cheating – they all make me smile!). 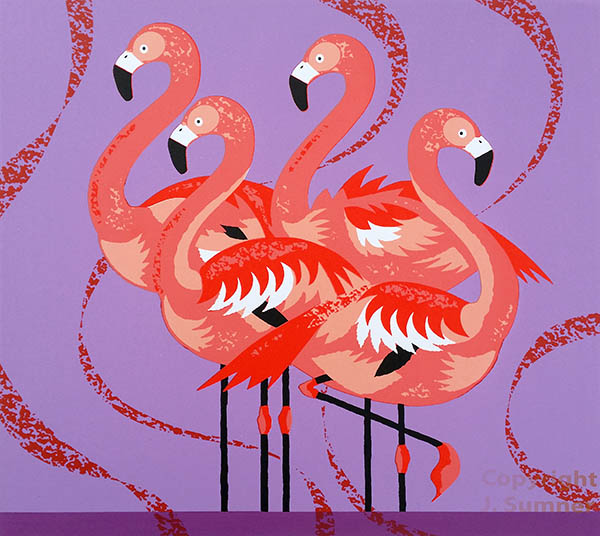 “The vibrant colours of Flamingo Fandango and Sunset Giraffe certainly seem to do it!” Josephine continues. “The print that I am most proud of is Silverback. The secretive and shy lowland gorilla I have portrayed is based on the magnificent Jock, who lives at Bristol Zoo.” 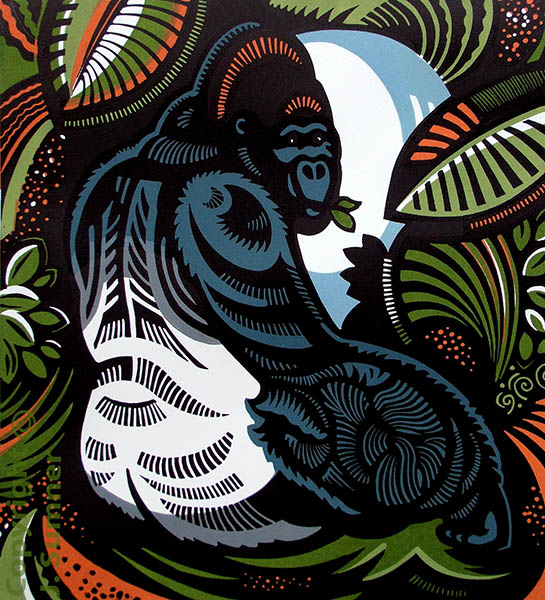 Taking a completely different path, Josephine has also produced a series of abstract paintings and rug designs “inspired by the ancient history of the Wiltshire landscape. These came about when I took part on an archaeological dig near Avebury some years ago. The rich and diverse story of the Neolithic stones was too tempting not to tell and they became the perfect vehicle for me to play with shape and colour.” 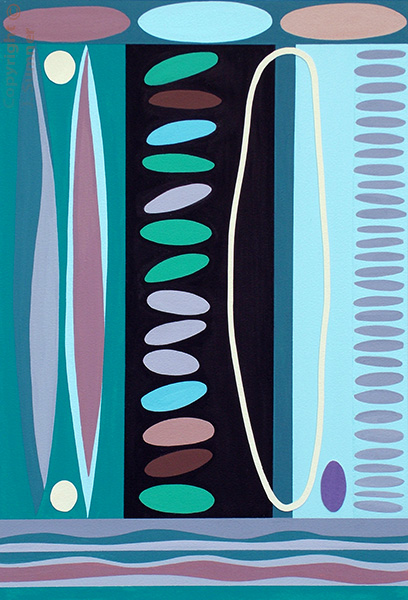 Other inspirations abound. “I try to visit art galleries and museums when I can,” she says. “A favourite of mine is the Pitt Rivers Museum in Oxford, which has a unique atmosphere.” She also adores “the exotic painting of Rousseau” and “the magical, exquisite world of illustrator Tony Meeuwissen.”

Likewise, she hopes visitors to her own exhibitions gain pleasure from seeing her work. “Seeing the joy or amusement on people’s faces when they see my animals is the best thing about being an artist! I hope my menagerie makes people happy.” 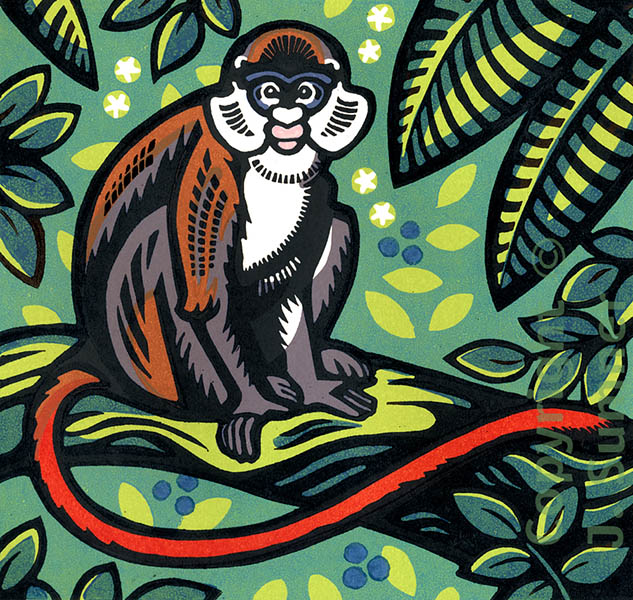 You can see all of Josephine’s animal prints on her website, www.josephinesumner.com, and in frequent exhibitions with the Oxford Printmakers Co-operative. “I’m also exhibiting with Red Hot Press from Southampton at the Sir Harold Hillier Gardens near Romsey in Hampshire throughout August and some of my abstract work (and a few animal prints) can be seen as part of an ArtCare Exhibition at Salisbury District Hospital in September.”

Excitingly, Josephine has just heard that she’s had a piece of work accepted for the National Print Open Exhibition at the Bankside Gallery, next to Tate Modern in London. “The exhibition runs in the autumn, from September 21st till October 2nd and showcases some of the best original prints from all over the UK. Of course, mine is a print of a monkey!”

Know an artist you’d like to see showcased on SkyLightRain.com? Give me a shout at judydarley (at) iCloud.com. 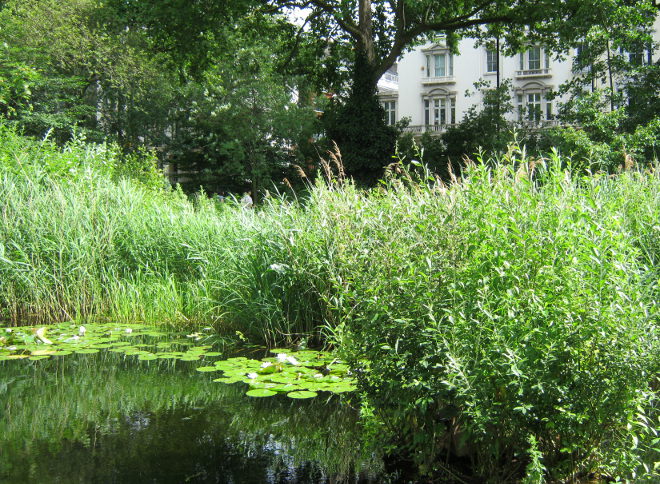 I am rather a fan of your average, unprepossessing lily pond – the life that teems on and beneath that gleaming surface is ideal for idle observation as your mind drifts.

But imagine if the pond you gazed upon, only half-seeing what lies before you, suddenly offered up something rather more sinister than a water boatman or gaping goldfish…

What could rise unexpectedly from the depths to break the surface tension? What tale might that unfold into? 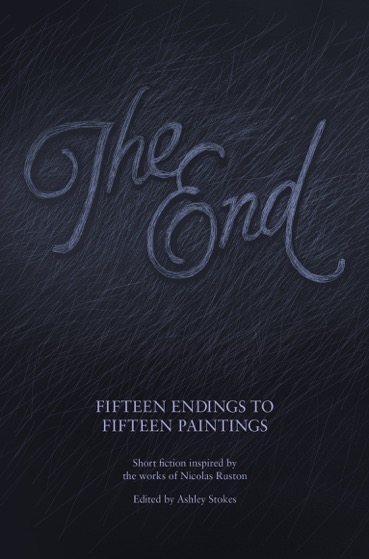 So it is with this upcoming anthology, The End, from the adroit Unthank Books, commissioned by Ashley Stokes, for which authors were invited to respond to the artwork of Nicholas Ruston. Each painting itself uses the words The End, imprinted on shadowy backgrounds that offer the sense of a narrative drawing the close.

With a subhead of Fifteen Endings to Fifteen Paintings, you know you’re not in for the sunniest of rides, but with contributors ranging from Tania Hershman to David Rose and u.v.ray, you’ll want to hold on tight, right till the actual end.

The variety is wonderful. Each story examines a different image, veering off in dazzlingly unexpected directions. Yes, there are deaths, but also near misses, recoveries and quiet moments of realisation.