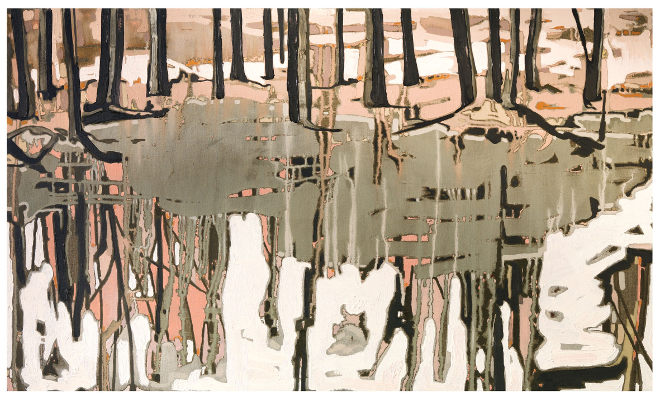 For artist Ange Mullen-Bryan, creating paintings is a sensory experience. For starters, there are the materials she uses: oil as a medium and canvas or linen as a base. “I often use coloured linens, using that colour as part of the painting and often leaving areas of the linen unpainted as part of the image,” Ange says. “Sometimes while on location in Sweden I paint with acrylic on unprimed plywood panels using the wood grain and texture as part of the work, again leaving areas unpainted.”

The texture of these materials is important to Ange. “I paint very intuitively and instinctively,” she explains. “Light conditions, choice of music and even smells contribute to the work. The mood of a painting is established as much in the studio as it is in my mind.” 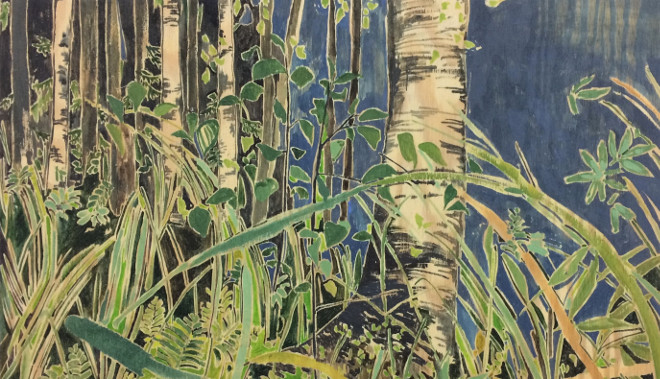 Nearly all of Ange’s paintings are inspired by the landscape of Sweden or other remote Scandinavian locations. “I have been visiting a part of central Sweden for the last 21 years,” she says. “We stay in a cabin a few feet from the lake shore with no running water and no electrics. It is a very important place to me and its remote and beautiful landscape provides endless inspiration and scope for new work.”

Rural scenery, Ange says, serves as a vehicle “to describe emotions and experience through the medium of painting. Each painting is a journey to somewhere I don’t really know.”

Intriguingly, each work of art is a voyage of discovery. “The painting reveals itself along the way and is often very different from the place in which I began,” Ange says. “The initial idea that made me start the painting is often left far behind as the painting takes its own path and I follow it. I try not to think too much and give myself up to the journey, that’s where the painting really begins, when you are no longer consciously aware of it.” 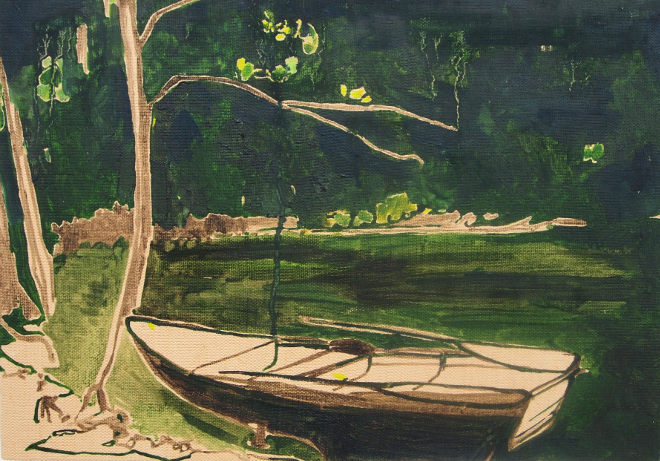 For Ange the greatest pleasure is, as she put it, “That opportunity to enter into that altered state, that flow state you hear many artists and musicians talk about it. It’s rare and fleeting and the thing you are always trying to achieve. And if you find it you cannot be conscious of it, otherwise it’s lost again by the very fact that you have become aware of it.”

Completing a painting offers up is own set of emotions. “There are a few moments after you finish a painting when you feel certain and complete and relieved, when it is finished and the whirlwind of compulsion to make something is over,” Ange says. “Sometimes that moment comes after a few hours or many months but that certainty about what you do is also really rewarding. And then the process begins all over again.” 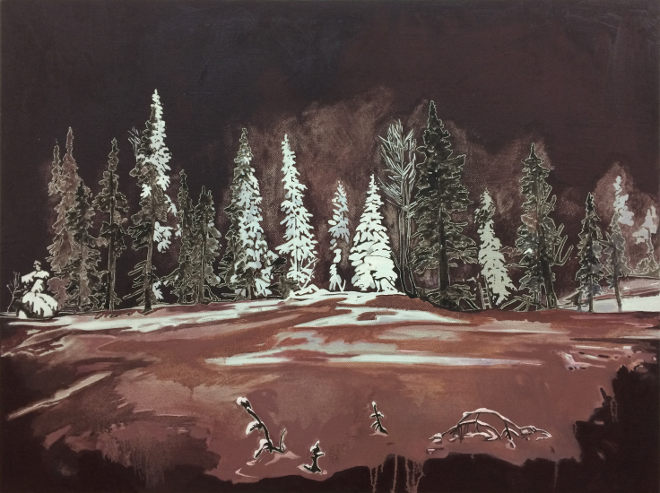 Despite seeking creative paths throughout her life, Ange didn’t begin to think of herself as an artist until she was in her 20s. “I was very interested in photography and spent endless hours at secondary school in a small cupboard that had been made into a darkroom,” she recalls. “I also liked pottery and lace making, textiles and so on, but also creative writing was really important to me.”

While in the midst of her Art foundation year, Ange had the opportunity to make large oil paintings. “Suddenly it all made perfect sense and I had a language that I totally understood in a different way to anything else,” she says. “But it was probably about 10 years after that that I really found my own way of painting, and I was painting consistently throughout that time. I was steadily learning to find my own voice, I guess.”

Photography, collage, textiles and creative writing are all still a huge part of Ange’s creative practise.

“Some of my work is exhibited at the St Michaels Bistro in Painswick, Gloucestershire (The Painswick Centre, Bisley Street, Painswick. Gloucestershire. GL6 6QQ), at the moment. Also my studio is an open one so you can call in and meet me and view the work, she says, adding: “Generally by appointment works best.”