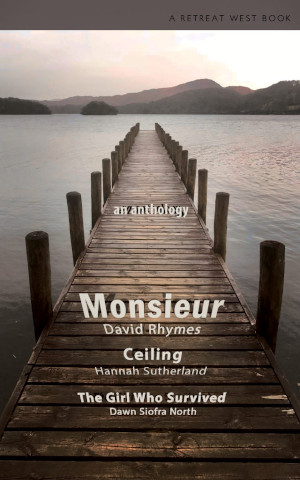 The first is the title novelette, Monsieur by David Rhymes. It opens with an impressively crafted line that succeeds in telling you reams about setting, time and character: “I tell Monsieur that if I were a man, I’d be a libertine, immune to the chains of propriety.”

That Jeannie, our heroine, is examining her master’s nipples “with the aid of an enlarging glass” within that page neatly informs us that this is a woman determined to explore life from every available viewpoint, unhindered both by class and gender.

A yearning for freedom and passion for the natural world hum throughout this densely and visually rich tale, as, encouraged by Monsieur, Jeannie disguises herself as the less fair sex and discovers a fresh side to her own nature: “with my chest pressed flat, my chin made sooty with a lick of dust, I felt more confident – I strode out in plain sight.”

Jeannie’s courage and spirit carry her far from home as Monsieur takes a naturist’s post on expedition vessel L’ Etoile et La Boudeuse to Peru and “the South Seas” with Jeannie as his valet, armed with a rifle in case of trouble, which inevitably finds her. It’s an exhilarating ride, even if some details, such as Jannie’s periods, are omitted, and both the ship and the islands they visit, are spring vividly life.

Ceiling by Hannah Sutherland was my favourite of the three novellas. It deftly uses second-person narration to build an intensely narrowed focus between the young protagonist and her elder sister Nee:

“The ceiling above us crumbles and our roots, forever intertwined, unravel and grow, bustin’ on through. We can be anything, Nee.”

Occasional chapters from their mother Kerry offer a third-person viewpoint. The fourth, fifth and sixth characters are their drunken dad Jim, their lovely step-dad Ewan and Nee’s boyfriend Ross.

The setting is expertly drawn using vernacular and details such as ‘The Tattie Sheds’, where the local disco takes place, while the perils both of adolescence and the unpredictability of their dad kept me riveted. The younger sister remains unnamed throughout, but has a voice so absolutely hers that she almost leaps from the page. Her humour is wry and unflinching, prompting smiles between the darker moments. “My knees knock together like an out of time drum. Sure, this growing up thing and all its rules is bustin’ up my head.”

The knife-edge nature of their existence sharpens as we gradually realise that the elder sister is the one who really warrants our concern.

The Girl Who Survived by Dawn Siofra North is an exquisite mesh of a fable, with multiple strands offering up different facets of light. It appears we are in a near future where the climate crisis threatens humanity with a catastrophic ocean rise.

It isn’t always obvious whose mind we nestle within, but that’s part of the fluid wonder of this world. It seems to be the main character, Em, or Emily, who welcomes us in with a micro-tale: “On my first night aboard as we lost sight of  land, she told me the rule: I’m to let go of you too./ You, the girl I was back when I believed I knew certainty.”

As openings go, it’s a work of art – both enticing and chilling.

From here we segue into a library, a café and a “slanty terraced house”, drawing us into more familiar, familial territory of angsty mothers and their anxious offspring: “There was no time to gather, to save and protect, when she came flooding into the room.”

Tales follow in lists, catalogues and poems that flit between past, present and possibly future, keeping us unmoored but entranced. Birds are friends and advisors, the act of creating art both cathartic and perilous. Each story’s title whispers suggestions of what it leads to, and you can’t help but grasp the thread and follow.

Monsieur / Ceiling / The Girl Who Survived by David Rhymes / Hannah Sutherland / Dawn Siofra North is published by and available to buy from Retreat West.

Read my reviews of Small Things by Hannah Sutherland.