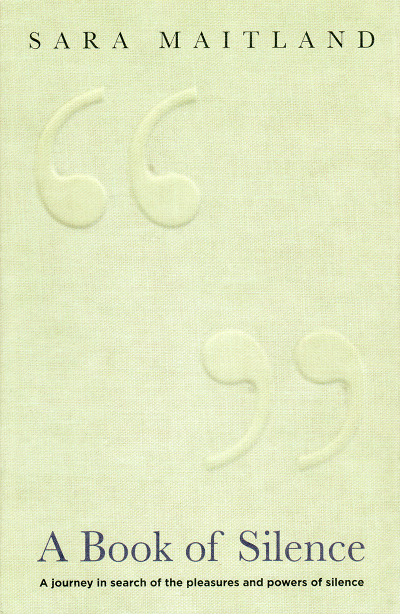 In A Book of Silence Sara Maitland takes us on a journey not just into her own quest but those of countless others, as she searches for the pure joy she equates with the experience of true silence.

According to Sara, silence is not a vacuum or an absence of something, but rather an element in its own right, and one we are losing a sense of in our increasingly fraught and noisy lives.

On the surface this is an almost political attempt to overthrow a deluge of lies and misconceptions about the concept of silence: “We say that silence ‘needs’ – and therefore is waiting – to be broken: like a horse that must be ‘broken in.’”

Part journal, part log-book, part scientific report, she shares with us all her findings, whether garnered through her own explorations or through reading a vast array of reports of other people’s experiments with silence, from desert hermits and Quakers to Buddhist monks and intrepid explorers. Her odyssey to experience it fully is relayed in conjunction with those she has researched in her efforts to find the common experiences that accompany such a journey.

It’s inspiring, thought-provoking and even envy-inducing, as she describes with vivid clarity a series of phenomena that go far beyond peace and quiet to extraordinarily rich – senses heightened she shares with us the pleasure of a making and eating a bowl or porridge, of auditory hallucinations that transform the sounds of the wind into a choir.

The vibrancy with which Sara relays the joy of eating porridge reminds me of Ian McEwan’s short story The Baby, in which a boy is transformed by a magic spell into his infant cousin and is overwhelmed by the sheer “egginess” experienced when eating a boiled egg. While Ian’s description can only be conjecture, it’s interesting that this imagined intensity is felt by a baby – pre-speech if not silent.

There’s an enviably rhythmic quality to her writing, and a glorious imagery that she brings to the fore even when describing the plainest of scenes. I could re-read her descriptions of dawn daily and never tire of the visual feast: “The stars would fade and the black sky turn indigo. The distance emerged, colourless out of the darkness. The sky would changes colour: indigo, grey, cream. The view opened out and away mysteriously. The horizon line like a shadow separated the sky from the moor. The sky would got on changing: grey, cream, peach (…) The western hills would catch fire first, the sunshine suddenly falling on them in a splash of brightness. The sky would still be changing: cream, peach, white, palest blue.”

Sara reveals a beauty that too often goes unnoticed in our hectic world, creating a sense of silence as a palpable thing, as tangible as a cool pool of water you can emerge from, quenched.

There is a sense of intimacy throughout, an openness that, ironically, makes me think I would enjoy spending time in Sara’s company, inevitably if unintentionally breaking her silence.

A Book of Silence by Sara Maitland is published by Granta Books and is available to buy from Amazon.