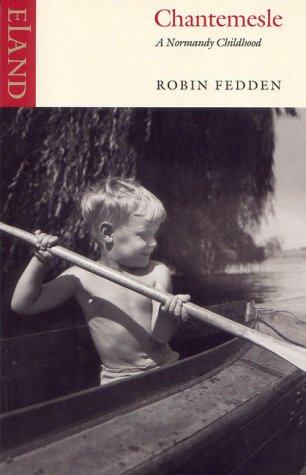 I picked up this slender volume in a charity shop and discovered within it all the riches of a sun-dazed, free-roaming childhood. It’s a perfect read for summer, particularly if you’re at all nostalgic for the days when holidays seemed to last forever and the greatest joy was heading out into the woods or fields with no plan to be home before teatime.

In Chantemesle: A Normandy Childhood, Fedden has captured the wonder and beauty of his years as a boy, exploring the land and river close to his parents’ Normandy house, where “adders basked in the sun”, “owls and redstarts nested”, and “anemones and orchids flourished on the chalk soil.” A keen passion for and knowledge of the area’s flora and fauna are shored up by Fedden’s ability to bring to the surface the innocence and curiosity of his young self.

The freedom of this time is deliciously evocative, as Fedden traverses land and river alike, finding both peace and adventure “In the sinulous channels that lead from one island to another,” and magic in the dense forest, where a mysterious castle appears and disappears according to the light, and a well throws back reflections of Fedden that he barely recognises as his own.

Amid the wildlife of the valley roam eccentric humans who colour Fedden’s sense of the place just as thoroughly: romantic, senile Monsieur Thibaut, imaginative Clotilde, blind Battouflet with eyes “like burnt-out moons”, even beastly Clovis.

Battouflet is by far the most colourful of these, becoming an ally of Fedden’s when he’s small, and seeming as much a part of the landscape as the trees. Even his home, a single-roomed cottage, is reminiscent of “the form of a hare: he no more lived in it than a hare lives in a depression in a clover field.”

When, far deeper into the book’s woods and dips and rises, love comes to Fedden, it’s Battouflet he takes her to meet: “It was part of her introduction to the valley.” It’s impossible not to be jealous of Fedden’s brief beloved at this point, not because of their particular romance, but due to the world he invites her into – the secret paths, creatures and characters she encounters through him.

But even she can’t enter into the true wonder of this place: “I alone knew the timeless time which had once existed there.”

The book offers an insight into an enviable childhood, blending nature writing with memoir and travelogue to exquisite effect. The perfect read if you need an escape from the buzz of modern life.

Chantemesle: A Normandy Childhood by Robin Fedden is published by Eland Publishing Ltd and available to buy from Amazon.