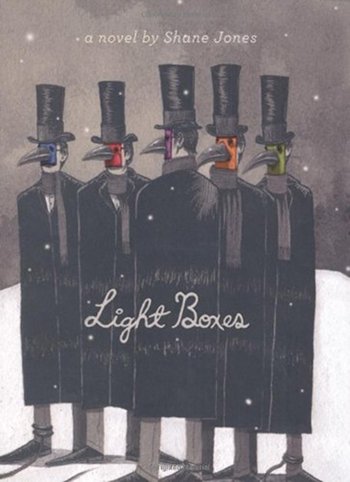 Told in beautifully crafted puddles of prose, Light Boxes tells the story of a town in the grip of a malevolent force known only as February.

Thadeus, Selah and Bianca form a tight family unit that’s torn apart when Bianca disappears from her bed one night.

Unexpectedly, February turns out to be a fully rounded (if not fully grounded), flawed and fearful being like any other, and his motives are never clear. But this isn’t a book for seeking answers in.

The imagery is powerful, evoking half-forgotten fairy tales as children are “twisting the heads of owls” and “giant flowers bloomed over clouds.”

I particular liked the group for former balloonists who call themselves The Solution, each wearing a different coloured bird mask. This scene is the focus of the cover illustration by Ken Garduno, and is the kind of iconic image that will surely be decorating the walls of student dorm rooms in years to come.But what the story is about is unclear. While George Orwell’s surreal satires always had a strong underlying message, I’m really not sure what Shane is trying to say here. At the end of Light Boxes I’m left with more questions than answers, and while I enjoyed every mouthful of this crumbly toasted teacake of a tale, I don’t feel I’ve been left particularly enlightened.

Perhaps it should be regarded more as a painting than a novel – leaving us free to draw our own conclusions about who February is, whether he really is to blame for the endless winter, and if he’s not then who might be. Throughout the text February claims it’s not his fault, but never once says he didn’t do it.

The sinister priests seemed to be forgotten as the pages went by. Instead the power of words becomes the dominant theme, and the idea of mind over matter, or even mind vs matter.

Whatever your interpretation of this resonant mini-novel, you won’t forget it in a hurry. Scenes such as Selah painting “an intricate intertwining of kites on Bianca’s hands and wrist” or of Bianca setting fires throughout the little frozen town will haunt you for days after you read them.

Light Boxes by Shane Jones is published by Hamish Hamilton and is available to buy from Amazon.