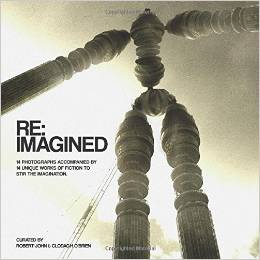 It probably isn’t news that I particularly enjoy work that brings images and text together. In the case of Re: Imagined, co-curated by Robert John and Clodagh O’Brian, images and creative writings have equal footing in an anthology that seems designed as much to be an exhibition as a book.

As one of the curators puts it (I’m guessing Robert, though the introduction isn’t attributed), the book is driven by “the desire to see the world in the unique way we used to when we were kids.”

The collection, we’re told in the intro, came to life via Robert’s marvellous website whatiseewhenilookat.com, “a social art/design project is to re-engage us with the things we see everyday.”

It’s a glorious aim – realised with a series of Robert John’s artworks that take ordinary scenes and twists them into the unreal – often with eerily beautiful results. Clodagh has taken these creations and matched them to submissions from poets and prose writers whose words illuminate Robert’s deftly adjusted views on the world. I only wish the text had been black font on white rather than white on black. Small details matter. 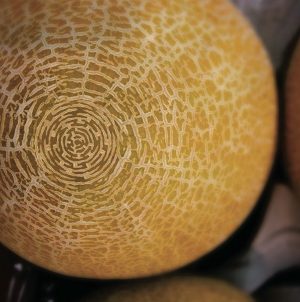 Fruits by Deirdre Daly is swollen with imagery and wit, telling the tale of Lucia, who is a “fifteen-minutes-past-her-prime Sophia Loren” and whose “skin smells of pebbles dripping in seaweed warming in the sun.” The artwork it sits with, Melon Maze, is a subtle reminder that nature can, and will, always contain mysteries that confound.

One of the most powerful and convincing of the artworks is Shark on a Hook, accompanied by Melaina Barnes’ Beneath the Scum – a tense portrayal of childhood that seems always to be on the brink of darkness. Other standouts among the writings include the elegantly ominous Spiderseed by David Hartley, the sensual melancholy of Yellow Brick Road by Rachael Smart, and The TV Is Always On by Peadar O Donoghue.

It’s a magical collection crammed with modern fairytales that reek of warnings and sorrows and hope – and dreams of better childhoods to come.

Re: Imagined curated by Robert John and Clodagh O’Brian is available to buy from www.whatiseewhenilookat.com or from Amazon. Proceeds help raise money for The Parkinson’s Disease Society.