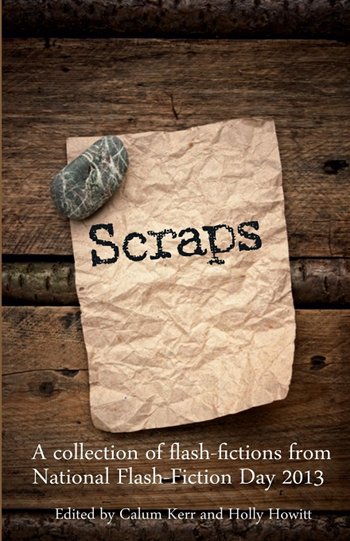 The Scraps anthology was brought out to celebrate National Flash Fiction Day 2013, so is aptly named. Each oh-so-brief tale draws inspiration from art, film, TV, or other creative world, yet presents the pieces without note of these initial prompts, as, according to the editors, “they are no longer the point.”

What remains is an incredibly diverse and intriguing body of work, including pieces from renowned writers such as Tania Hershman, Vanessa Gebbie and Sarah Hilary alongside fictions from emerging writers I hope to see more from in future.

For me, the best works of flash fiction contain the depths of a novel in a drop small enough to sit comfortably in the bowl of a teaspoon, and use skills shared by poets to evoke rather than say. It’s a writing discipline that demands the reader pay attention as much to the space between the lines as to the lines themselves. Each of the tales in this anthology achieve that, and some do it exceedingly well, including Feed A Fever by Freya Morris, which exhales a story of frailty and trust in such a way as to encapsulate large parts of the human experience.In others, single lines caught my attention, making me reconsider familiar experiences from different angles, such as L.A. Craig’s Shoe Fly Baby, in which the signature on a birthday card “smelled of white nothing” and comes from a person whose voice “numbs me from his deceit.”

The brevity of words demands that those that do make it onto the page are painstakingly selected, each one expected to serve a role more commonly taken up by two or three. Some are almost dizzying in their impact. In Jack O’Lantern by Kevlin Henney each pumpkin “wore a different expression, but all looked like Uncle Jack”, a detail that becomes unerringly sinister before the last line is reached. In Celery by Jim O’Loughlin, the ordinariness of a stringy salad items is transformed into a delicacy: “an impossible taste of summer in a long cold winter.”

The last few pages are given over to tales fewer than 100 words in length. And this is where the full, unspooled potential of flash fiction is showcased. A man grieves for his father, a woman spins and spins, and an act of violence is painted with such beauty in India that it will leave you breathless.

Scraps: A collection of flash-fictions from National Flash-Fiction Day 2013 is edited by Calum Kerr and Holly Howitt, and is available to buy from Amazon.