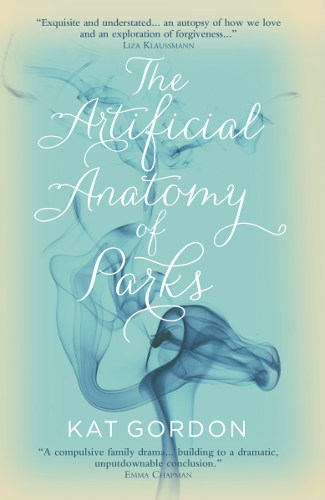 Tallulah Park is the walking personification of the phrase “Could do better.” Aged 21, she’s working a dead-end job, living in a depressing bedsit, and has few if any friends.

Then she receives the news that her estranged father Edward has had a heart attack, and finds herself no longer able to steer clear of the family she’s been avoiding since fleeing boarding school six years before. “I’ve lived like an orphan since I left home,” she says as her father’s life hangs in the balance, “I’ve been completely alone, not counting the others in the hostel, and it’s never bothered me too much until now.”

It’s the “until now” that hints at the heart-wrenchingly vulnerable side to her personality, with an exterior, as one character puts it, “as hard as nails,” but with “a soft centre.” This is a girl who’s learnt to put up barriers, to snap first, ask questions later, even to the detriment of her own happiness.

As the novel unfolds, author Kat Gordon introduces us to Tallie’s sweeter childhood self,  interweaving the versions of her protagonist until the two stories gradually come together to reveal what went wrong in Tallie’s life, and how it could, potentially, come right again.

In Kat’s sparky debut, it’s a trick that works well, with one plotline spilling into the other, so we see Tallie develop as the years slip by, to become the feisty, distrustful girl.

She has good reason to be self-protective though, with tragedies bleeding into secrets shadowing betrayals that would make a weaker person cave in on themselves.

In the present, as we wait for Edward to wake from a medically-induced coma, we meet his sisters – hen-like Aunt Gillian and glamorous, disdainful Aunt Vivienne, who says of Tallie, “I’m glad you haven’t turned out so nice.” The only sibling not present is their youngest brother Jack, around whom the novel’s biggest secret swirls, signposted tantalisingly throughout.

Through the sections from Tallie’s past we get to know the people who matter to her, not least her spiky grandmother Matilda, her beloved mother, moggy Mr Tickles and the mysterious, warm-hearted Malkie.

At times Tallie is her own worst enemy, musing to herself: “Maybe I never really tried to make my life any better because I assumed this was my lot. I wouldn’t be the first Park to do that.”

Yet as we accompany on her journey through the years, it’s impossible not to grow emotionally invested in Tallie and feel for her as she wards off angst from a multitude of sources. I’m pretty sure that by the time she’s the hurt adult sitting at her father’s bedside, you’ll be ready to fight in her corner, whatever revelations come.

The Artificial Anatomy of Parks by Kat Gordon is out from Legend Press on 1st July 2015, and is available to buy from Amazon.