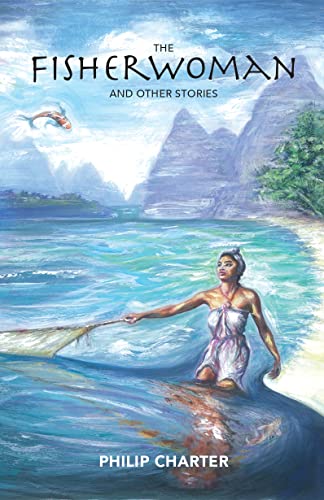 This richly packed collection of short stories by Philip Charter carries you across planets and through time. In each instance, Charter shows his talent for summoning just the right level of detail, painting in scenes with startlingly precise vivacity so you can picture and feel the exact slant of sunlight and depth of shade.

The collection opens with the title tale – a story about stories set in a futuristic world. It centres around a koi pond and an old women noticed daily by the narrator, who feels compelled to open up to this stranger during the course of the tale. It reads as a curious and confident fable with a whisper of warning about the harm we’re doing to our home planet.

Other intriguing fables include Peloten, which reports the sighting of “thousands of riderless bicycles” and their impact on the populous.

“They travelled clockwise, around a huge circuit of streets, like they were competing in a race with no rules and no finishing line. Capturing and dismantling them didn’t help, it just resulted in the appearance of an identical one the next morning, completing the herd of exactly eight thousand one hundred and twenty-eight machines.”

Knowing what to resolve and what to leave unknown is clearly another of Charter’s skills.

Throughout the collection, stories occur in locations ranging from Dubai to Peterborough, and there are scenes that have stayed with me long after reading, including the collapse of a grandstand in Racing Fate where “Spectators formed a raging sea, rushing for the exit”; a tiger advertising a circus in Mexico, “spread on the floor like pancake batter, head on its paws” in Two Nights Only.

Charter captures his characters through their actions, what’s said and what’s pondered. In Two Minutes, Forty-Six Seconds, a son eating breakfast with his mom observes:

“She tucked her gray hair behind her ear so she could hear better. ‘Your Papi used to say when the city’s quiet, it’s not an absence. Silence is a note, too.’
Her idea took a while to sink in. Take another mouthful. Chew. ‘I like that.’”

There are plenty of deeply thought and felt treasures to discover among these pages.

Don Pedro’s Dog eases you into a world where a woman stand on a Spanish balcony in winter and watches a man walk his Chihuahua around a plaza.

“ Just as I lower my gaze to pretend I was watching something else, the man waves up at me and smiles. He has noticed. We have our own patterns and routines, and today, I’m part of his.”

It’s a beautiful tale, brimming with unexpected connections and hope.

The Matchstick House, another of Charter’s skilled ‘tale within a tale’ creations, also crept under my skin, this one drawing out empathy through the evocation of a school girl called Jhoti and her treasured sole possession.

Ludgate Circus Crossing offers an incisive insight of modern life, combined with a brilliantly absurd miracle. It offers perhaps the book’s most unexpected romance, opening with a high-rise view over a busy intersection:

“The intersection is a four-way crossing like they have in Japan. Frowning lawyers and investment bankers juggle coffees and copies of City AM, all seemingly one ball short of a full set. A young upstart crosses on an electric unicycle. The Council can’t decide if they should go on the pavement, the cycle lane or straight to the bottom of the bloody Thames.”

This story also has an exceptionally satisfying ending, and I write that as a coulrophobe.

Each of the stories is vividly original and unlike any of its neighbours, apart from one important thing – the thread of connections running throughout. This is a book of ordinary people living ordinary lives that occasionally collide in ways with potential for unutterable joy.

The Fisherwoman and Other Stories by Philip Charter is available to buy from Amazon.