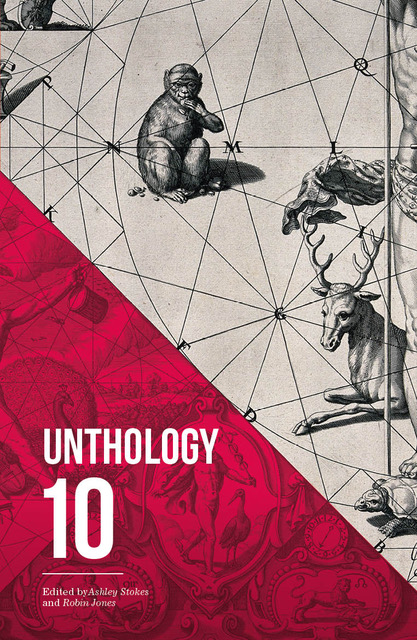 The tenth instalment in Unthank Book’s excellent series of Unthologies is all about mental and physical journeys, and people on the brink of savagery.

An encounter at a playground has as much unspoken barbarity seething beneath the surface as a meeting with a bear, and a flight on a mythical beast. The characters in the tales selected by editor Ashley Stokes and Robin Jones have little to loose, which makes them all the more compelling. More than one have demons on their shoulders, and reckless bravado seems par for the course within a few pages. It’s a dizzying read, full of bile, venom and tantalising swoops of the imagination. These are worlds to visit, and then disentangle yourself from, breathless and relieved.

In K.M. Elkes’s Ursa Minor, the brutality of IVF treatment brings a primitive urge to the surface.

In The Best Way To Kill A Butterfly by Hannah Stevens, that urge breaks through as something enchanting is turned ugly with shocking speed: “At dinner parties it became customary to have butterfly centrepieces. The insects would be pinned to cork and cased behind beautiful frames.”

Looking at the way crazes take hold and how we can succumb or resist, this story feels like it’s about far more than an influx of insects, examining instead our desire to possess, and to belong.

And all this while faced with a gigantic bird-like creature spawned by Buddhist and Hindu mythology, who just happens to be carrying an elephant and a turtle in its claws ready to snack on later.

It’s the skill of the author than makes such scenes seem almost commonplace.

This talent is shared by many of the authors in this Unthology, as a woman evokes spirits through hand drawn maps, and a desperate man on a bridge is confronted by “an orb of vibrant disturbed energy.”

Yet it’s the realism between the magic that draws you in each time – gritty beneath your skin and bitter in your mouth but persuasively, emotionally, true and, in some cases, disconcertingly recognisable. We’ve all been there, on that bridge, facing up to that bear, pretending to be more courageous than we really are.

These are stories of life, and a little bit more, multi-layered and extraordinary even in their most everyday moments.

Unthology 10 will be published by Unthank Books on 2nd July 2018. It’s available to pre-order from wordery.com.