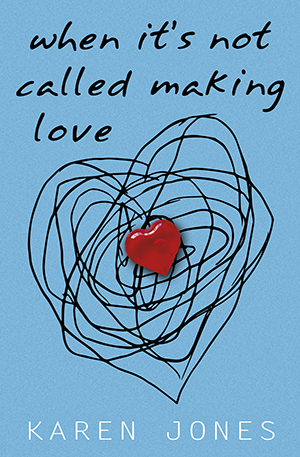 Fewer friendships are more complicated than the same-sex ones we have as we near and break into our teens. In ‘When It’s Not Called Making Love,’ Karen Jones draws us into the intimacy that straddles bullying and lust, as innocence sloughs off cell by cell.

Jones makes powerful use of the novel-in-flash form, with each of her 16 flash fictions building on the last as her characters hurtle towards adulthood.

While each story could be siphoned off to stand alone and shimmering in solitary perfection, each plays such a crucial role to the overarching tale that should any be removed, the whole structure could shatter. This contributes to the tension of the underlying story, with a sense of characters clinging on by their fingertips.

The novella opens with ‘Recommended Stopping Distance’, a flash that rings out for almost a full page in one long torrential sentence, before finally a full stop allows us to take a breath. There’s so much crammed into this first sentence that it’s worth reading twice – once for the sheer exhilaration of it, and again, to catch the details that may become important later.

Yes, it’s Bernadette’s former best friend who was hit by that car, and yes, Bernadette has been bullying her: “You called Andrea speccy-pirate and skinny-malinky-long-legs and carrot-head and ugly-duck and you made all the other girls hate her.” It’s savage and shocking, and utterly believable – pass any playground populated by pre-teen girls and you’re likely to hear evidence of similar.

In ‘Smart Girl’, we meet Jenny, one year older and far more self-assured than Bernadette. Immediately, a curious lop-sided friendship forms: “’What’s it like, being fat and ugly?’ she asks. You don’t know how to answer that one. You didn’t know you were ugly until Jenny told you.”

At times, as in the excerpts above, Jones’ harnesses the unflinching nearness of the second person, to drag us deep into scenes. At other times, ‘you’ is replaced by “Bernadette’ as we encounter a third person voice. It takes courage to shift viewpoint in this way, but Jones achieves it with such seamless dexterity that as readers we scarcely notice the shift, so absorbed are we by the building story.

‘Nature Walk’ and ‘New Girl’ offer us fresh eyes on Bernadette – telling us the same story twice, first from an unspecified ‘we’ representing her fellow pupils, and then from her own, relaying an act of defiance that wins her classmates approval. Her courage in these moments, and her agreement to start a gang on the proviso everyone is included, “no one left out,” made me warm to this awkward girl. She’s learning from her earlier mistakes.

The emotional stakes are heightened over the following pages. Occasionally, the reading is discomforting – Jones exposes Bernadette’s vulnerability as we watch her navigate the treacherously narrow paths of adolescent desires, offset against Jenny’s interpretation of what friendship can and cannot mean. Jones invites us to examine the demands society makes of female humans – to be hairless, to be fragrant, to “never be a dirty girl.” The confidence-eroding impact of a bad reputation, however unfounded, is potently rendered in Jones’ frank, relatable style, along with the struggles of discovering, and accepting, our own sexuality.

There are plenty of laugh-out-loud moments too, not least in the ‘Stop and Think’ story involving nuns and sex education.

It’s breathtakingly bold to attempt to cram all the confusions, temptations and discoveries of adolescence into so few pages, but Jones achieves it with enviable aplomb.

At last we come to the title story, a piece of such longing and hope that I wanted to give Bernadette a hug, and remind her that, thankfully, our teenage years are finite.

When It’s Not Called Making Love by Karen Jones is published by Ad Hoc Fiction and is available to buy from bookshop.adhocfiction.com.