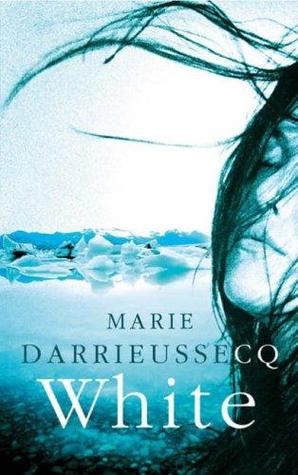 Marie Darrieussecq’s novel White received its first print run in France in 2003, and is set in what was then the future, 2015. As a result there’s a curious sense of being in a recognisable but slightly adrift parallel world, where a manned rocket is on its way to Mars, and phone calls take the form of holograms. It’s not far out, but just enough to add to the sense of being elsewhere – on Earth but not quite as we know it. Very appropriate given the novel’s frozen landscape.

The story opens with our two protagonists, Peter Tomson and Edmée Blanco travelling to one of the most inhospitable and hazardous places on Earth – Antarctica. Each has a role to play in keeping their colleagues safe; telecommunications engineer Edmée by providing the sanity of a link to home, and heating engineer Peter by ensuring the generator that keeps them from freezing to death doesn’t quite give up the ghost.

Talking of ghosts, Darrieussecq has taken the concept of an omniscient voice and given it new life by having the story told by the ghosts who populated the whitest of white places, from Captain Robert Falcon Scott and his ill-fated team, to the ancient echoes of our planets earliest elements. As a result, it’s as though we’re eavesdropping on our romantic leads’ thoughts, dropping from one tangent to another, and always with the backdrop of whiteness, blankness, where the separation between ice, sea and sky is barely discernable.

Dreams slew into consciousness, seeming as significant as waking ponderings, and at times it isn’t entirely clear when an impulse is being acted on, or merely mulled over. It is as though Darrieussecq is drawing a line beneath contemplation and deed, stating that each of these has equal value, and equal insignificance, in the grand scale of things.

There’s a distinct skill to writing the weft of human reflection and deliberation, in summoning up a place where the key characteristics are temperature and light. Darrieussecq accomplishes this, and furthermore manages to make it utterly compelling. There’s even, as Peter and Edmée edge slowly towards the affair the ghosts have already whispered into our ears, a tremor of suspense – a frisson that is buttressed by the crucial, survival-dependent generator’s intermittent alarm call.

Life here is fragile, that much is clear, and this factor intensifies the simple act of living, even as Darrieussecq guides us through a dance that is as much half-slumbering as awake.

In the edition I read, White by Marie Darrieussecq is translated from the original French by Ian Monk and published in England by Faber and Faber. It’s available to buy from Amazon. I bought my copy from Bloom and Curll.