Organic silhouettes and echoes printed on circles enclosed within squares form the heart of artist Cheryl Brooks’ work. “I lived in Barcelona for eight years and grew very interested in the geometry of Islamic tile patterns – they can’t depict anything natural, so it’s all about the shapes, and they must look perfect, but can never actually be perfect. That was the beginning of the idea for me.”

Drawing these ideas into her own work, Cheryl began to meld it with an obsession with the geometry seen in plant life, and then expanding it. 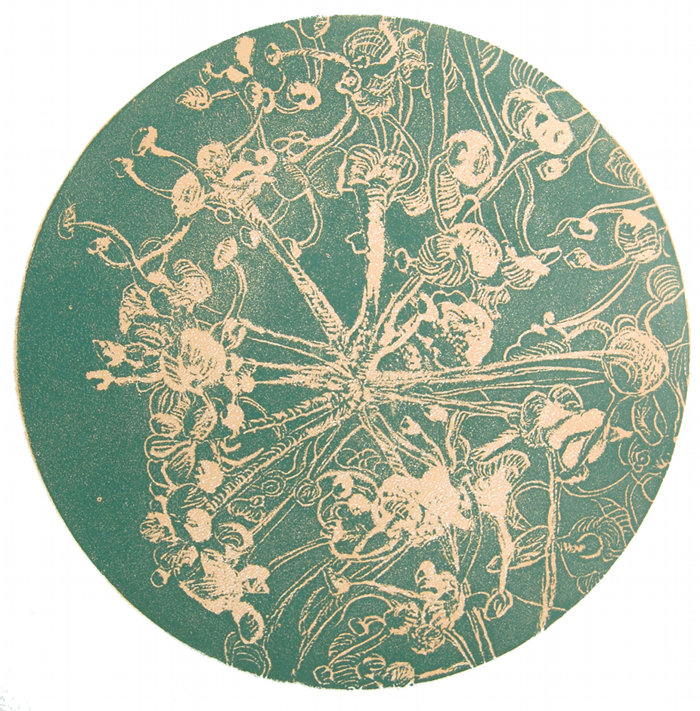 Back in England, Cheryl continued to explore, developing a series of pieces playing with the visuals of cow parsley, elderflowers and other botanical shapes. “I love taking something small and making it bigger,” she says. “No matter how small the original blossoms are, the natural geometry is still there.”

Long before she realised she wanted to be an artist, Cheryl recognised the joy making things gave her. “I love working with my hands – cutting, pasting and printing,” she says.

The desire to make and create initially led to Cheryl training to be an interior designer, gaining both a BA and MA in the discipline before taking a job designing spaces for pubs and nightclubs. “I eventually left that because it was so stressful and on such a large scale,” she says, “but I still wanted to be in that industry, so I worked with an architect in Cheltenham, still as an interior designer, but on much smaller projects.”

At this time Cheryl began taking a life drawing class, and then left Cheltenham to go travelling. “An Australian friend I had met while travelling asked, what do you really want to do? And I said, be an artist. Then she asked, are you good enough? And that got me thinking.”

With questions like that, who needs a life coach? The result was another BA followed by an MA, both in Fine Art. “So now I was MA squared,” Cheryl grins.

The most important thing she felt she learnt on these courses was how to transfer her ideas into art. “I had all these thoughts in my head and wanted a way to express them, to find my own way to make sense of the world and share this.” 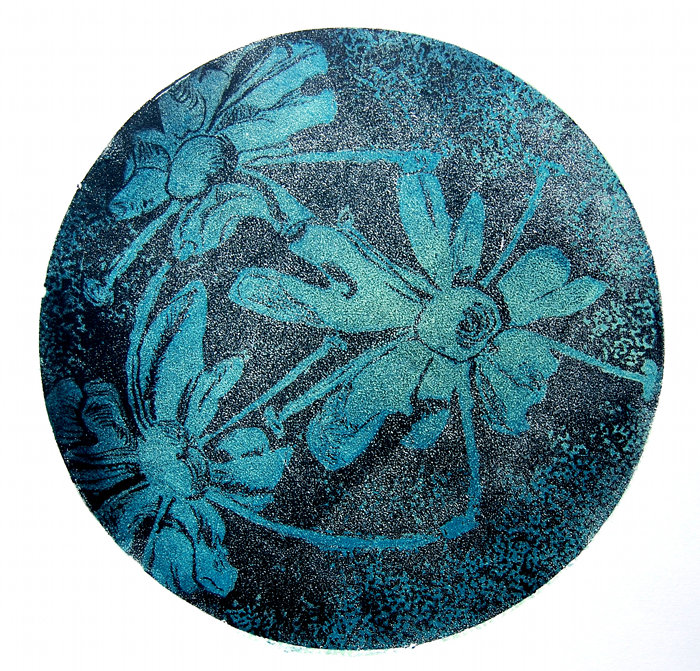 Part of Cheryl’s MA was spent in Barcelona, a city she fell in love with so deeply she returned in about 2004 to make a go of being a full time artist there. “It was really hard,” she admits. “I did have a gallery who sold my work, but still… You have to get used to being very poor, and after a while that’s all you can think about. It gets in the way of the work, of the creating.”

To counteract this, Cheryl trained as an English language teacher, which freed her up to focus fully on creating whenever she had the time. After eight years in Barcelona, though, it felt like time to return to England, this time to Bournemouth with its profusion of foreign students in need of a good language teacher.

Teaching, for Cheryl, is about sharing her knowledge and encouraging others to join in – an ethos that also informs the collaborative art project she launched, titled Image Flowers https://imageflowers.wordpress.com. “We have a series of core images that people can look at and think, that reminds me of… and then produce a work in response to it, or simply submit a photo,” she explains. “The idea it that the initial image is the centre of the flower and each of the responses is a petal. It’s about opening up dialogue. Anyone can get involved.”

Being involved, a part of something bigger, has worked well for Cheryl. While settling into her new Bournemouth life in 2013, Cheryl joined Poole Printmakers. “They’ve been going for over 20 years. It’s a cooperative where you can go and use the presses, meet other printers, do courses. It’s very inspiring!”

Having a space to go and be creative in was especially important to Cheryl at that point. “I was renting a room in a shared house, so had nowhere to work,” she remembers. “These days I have a studio in my own house, where I tend to hand roll the prints, but if I want to use a press I go to the cooperative and make as many as I need.” 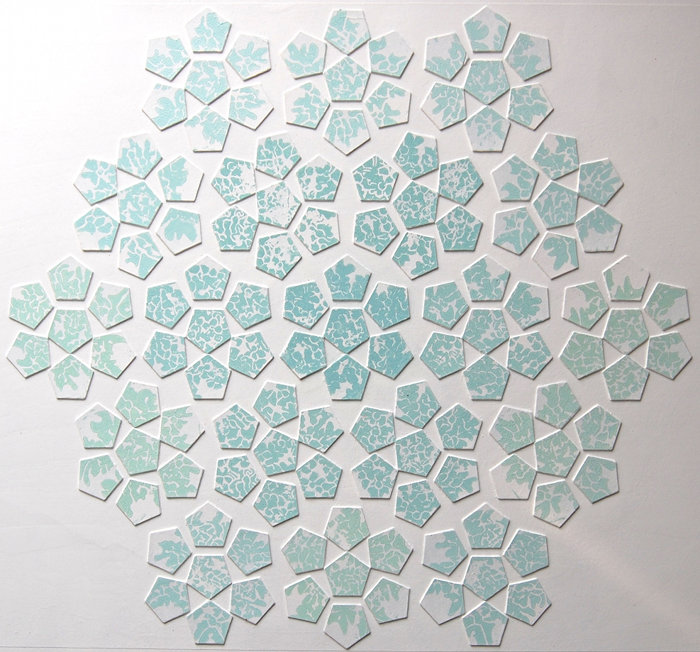 The break away from painting to printing made a huge difference to Cheryl’s perception of her work. “Printing takes me away from concentrating too much on the concept and allows me to focus on the image,” she explains. “It allows me to create something more immediate, and by making multiples rather than a single image that takes a long, long time, it means each piece is not so precious.”

Cheryl’s materials emphasise this, as many of her striking round pieces are created using the polystyrene circles you find in the packaging of shop-bought pizzas. “I love the round shape,” she comments. “The polystyrene is very receptive to the oil-based printing inks I like to use. The surface is quite soft so you can create a lot of expressive marks simply by pressing lightly.”

It sounds really satisfying! Cheryl also creates linocuts, which is a lot more challenging but results in a very different effect. “A pizza base plate has a very limited life, while a lino plate will print again and again,” she points out. “The lino is harder which means they’re much more precise. A pizza base will always squidge a little, which produces a very different look.”

This technique for creating prints has in itself formed the idea for another online project, this time in the form of an arts hub called Pizza Base 15 http://pizzabase15.wordpress.com. “It’s a virtual arts centre, with workshops, a café with cake recipes, exhibitions and more,” she explains.

More recently, Cheryl has been taking a course in surface printing on textiles. “I’d like to take it away from fine art and back towards craft,” she says. “I want to explore the possibilities of making things you can actually use and wear rather than just hanging them on a wall – learn about pattern repeats, the dyes and inks you need to use, and try printing with pizza bases onto fabric.” 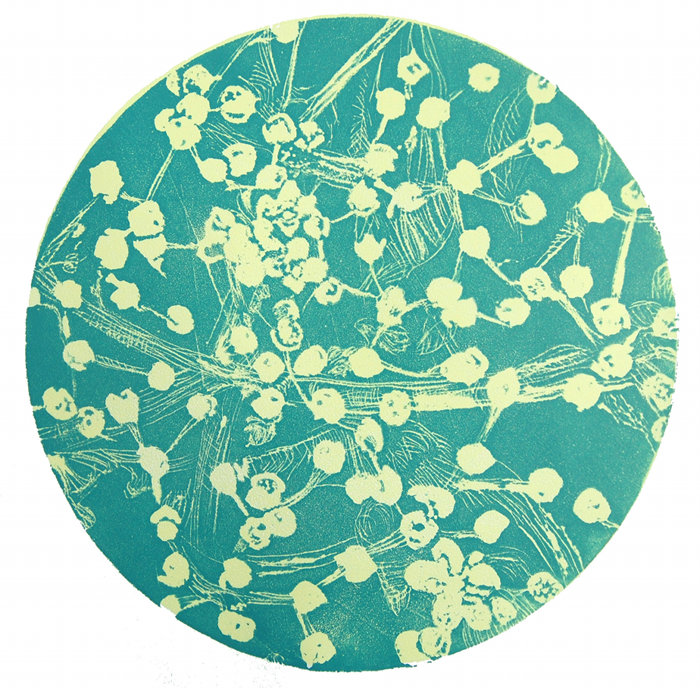 Cheryl particularly relishes the juxtaposition of circles within squares, a pairing seen in many of her framed works.

“It’s the infinite within the rational,” she says, “The organic world is full of spirals and spheres, but there are no squares in nature. It’s a manmade shape. I love putting the two together.”