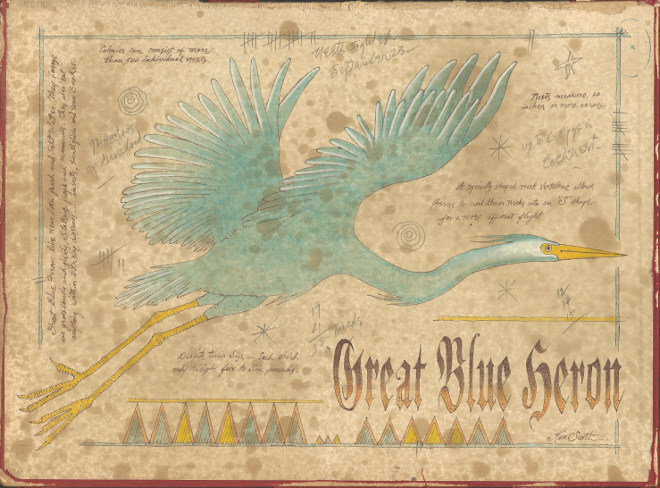 Artist Ken Scott paints beautiful wildlife studies on the covers of old, broken-down books otherwise destined for landfill, and in doing so preserves something of history, culture and nature.

“I’m an artist and illustrator whose work has an intensely historical, even biographical, concept to it,” he says. “It’s conceived from out of the place where a number of important influences come together: my life as an artist, my reverence for history, and a personal study of the lives of explorers who travelled in Colonial America in the 17th and 18th centuries. As an artist, I see objects that I paint through the eyes of those travelling artists or naturalists.”

The resulting artworks are elegant and precise, with pencil notations and ornate lettering adding to the feel of discovering a page torn from an age-old travel journal – as Ken puts it, offering “an additional appearance of age and prior usage.”

He explains: “I’ve always been drawn to things that have a history and a story behind them, things that show signs of wear or age. ”My goal as an artist is to create items with a hint of having been loved and handed down from generation to generation, having been owned originally by a long forgotten person.” 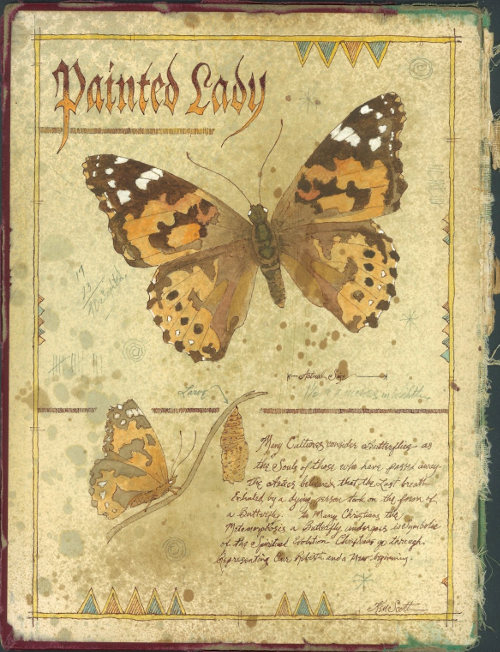 As a small child, Ken used to make sketches of the people and things he saw around him. “Art classes weren’t offered in the high school I attended. When I looked for a college, I found one that offered good sound art teaching. At Southern Illinois University I studied under some of the top illustrators in the area. These instructors were a tremendous influence in my becoming an illustrator and learning about the workings of an art studio. The classes were set up to function like a professional art studio with the instructors as the creative directors.”

Ken’s passion for nature developed gradually as he pursued in interest in American history, initially learning the art of leather work, and gaining expertise for making shooting bags and hunting pouches imbued with an impression of use and wear “for Colonial reenactors, both in the United States and other areas around the world.”

Ken’s artifacts have even been used in TV documentaries and as movie props. “I made the hunting pouch for Davy Crockett, played by Billy Bob Thornton in the movie The Alamo and also supplied a hunting pouch for the recently released movie The Revenant starring Leonardo DiCaprio.” Understandably, Ken has been named one of the top 200 traditional craftspeople in America three times by Early American Life magazine, with his leather art highly rated for its quality workmanship, fidelity to period design and construction techniques “by judges expert in museum-quality antiques and fine, high-end reproductions.”

Ken’s tangent into botanical art came about by chance when he was offered a residency at the T. C. Steele Indiana historic site. While there, he lived in a rudimentary cabin, with only a compost loo and no running water or shower facilities, for two weeks. ”The first night there I heard squeaking sounds coming from the stone chimney that I slept next to. My first thought was mice. The next morning, I checked with the site manager and found out that the place is overrun with bats. It also had a lot of wasps and beetles!” 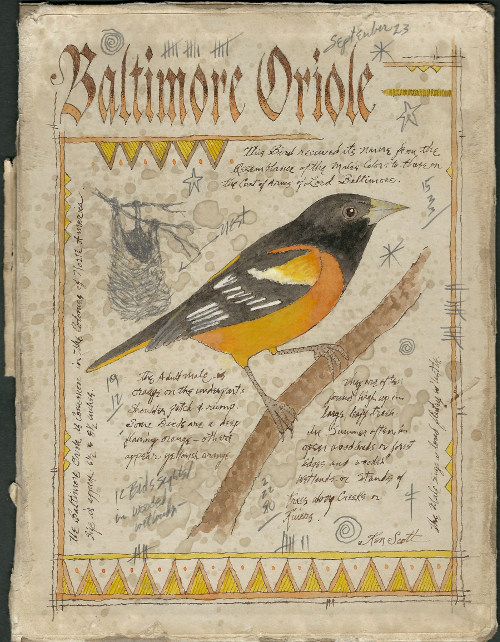 As part of his residency, Ken taught workshops on developing nature journal sketchbooks. “In addition to the historical paintings I was doing while in this residency, I decided to do naturalist drawings of a wasp and a beetle, in the style of an 18th century naturalist, to discuss during these workshops,” he says. “They were well received, so I decided to do some other nature paintings of birds, and so on.”

His technique of using old book covers as the canvas for his nature work began with a fascination with Pennsylvania German fraktur documents. “These are documents from the mid-18th to the mid-19th centuries – the term fraktur is derived from a distinctive German script marked by ‘fractured’ pen strokes,” Ken explains. “Fraktur drawings were executed in ink or watercolours. Common motifs include birds, hearts, and tulips, as well as blackletter and italic calligraphy. I noticed that there were a lot of frakturs drawn in books or Bibles, and that a lot of schoolbooks had notations on the inside of the covers, so I decided to combine the two things. Most of my work is painted on book covers that have been rescued and repurposed as my painting surface.” 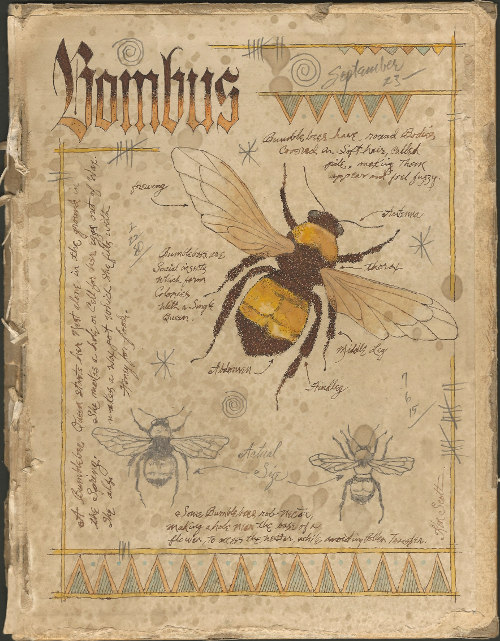 Ken later visited the Indianapolis Zoo as one of fifteen artists invited to participate in their annual spring Naturally Inspired Paint In. “We painted plein aire and donate our paintings to the zoo. The paintings were displayed at the zoo during the summer and then sold via silent auction in August. I have been invited to participate in this for the last several years.” The two paintings Ken produced and donated in 2015, a butterfly and a hornbill, were purchased record-breaking auction bids.

Ken relishes being able to express himself “creatively and historically through my work, whether by completing a narrative painting or one that has a fictional narrative that I have created. I get great satisfaction from being able to start with a blank piece of paper or leather and create something that looks like it was made a couple of hundred years ago and has been lovingly handed down from generation to generation.”