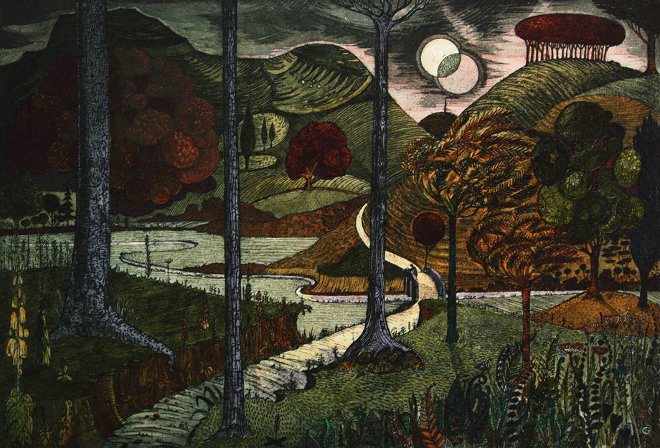 Another World Autumn 3 by Kit Boyd

Living hemmed in by buildings as I do, I sometimes yearn for the winding tracks of country paths; the luxury of views so wide I need to turn my head to see them in their entirety.

Kit Boyd seems to have a similar thirst, filling his artwork with hillsides and forests that sweep towards churning skies. There is an impression of movement and sound – wind through leaves, water rushing. It’s as though you’re on some kind of pilgrimage and have paused to take in your surroundings, catch your breath and relish the peace of the natural world.

For Kit, however, reaching a point where his art could sustain him was itself a significant journey.

“It’s a long time since I did my degree in Visual Art in 1991 and for the first six years after, I worked in record shops to get by and carried on painting in the evening,” he says. “I found it difficult to sell my work, which was then far more surreal. I then got a job working for an environmental charity which I put all of my energy into, so between 1999 and 2006 I wasn’t making any work and was becoming rather unhappy about it. I also had a problem with my eyes which needed a lot of treatment, and I felt that I should get on with being an artist before it was too late. I packed in my job, sold my flat and drove around mid Wales looking for somewhere to live.” 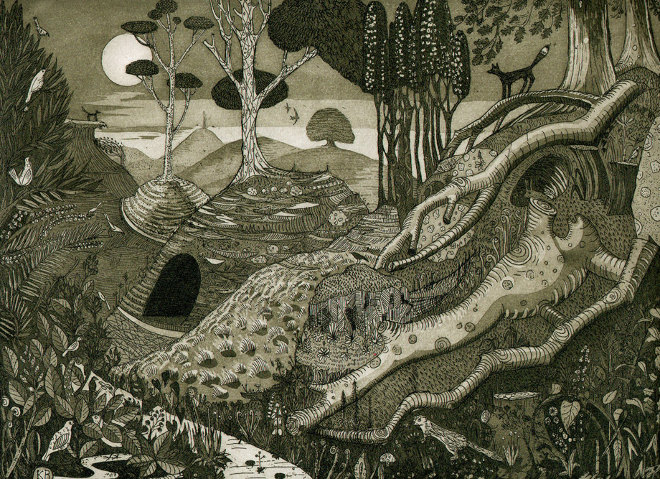 This courageous step meant that Kit, through the sale of his flat, had some money for the first time in his life.

“It meant I could invest in myself and my career,” he says. “It took five years of doing art fairs on my own and not making much money (the 2008 crash didn’t help at all!) until I moved back to London and rented a studio, learnt printmaking at Morley College and joined several co-operative artist groups with galleries.”

Finally Kit had the connections, skills and vision he needed to start selling more work.  “Being with these galleries at the Affordable Art Fairs was an aim – they’re the best art fairs in the UK and have made a huge difference to me in reaching an educated art buying audience. So I’m finally making a living as a full time artist, but I had to dedicate myself to it 100%. It’s still a very unpredictable profession in terms of income, but as long as I can pay the bills and eat, then I’m OK.”

Kit’s determination paid off, fuelled by feeling “compelled to do it and believing in myself – it honestly felt the right and only thing I should be doing. I always wanted to make art to hang on people’s walls but which had some deeper meaning at the same time.” 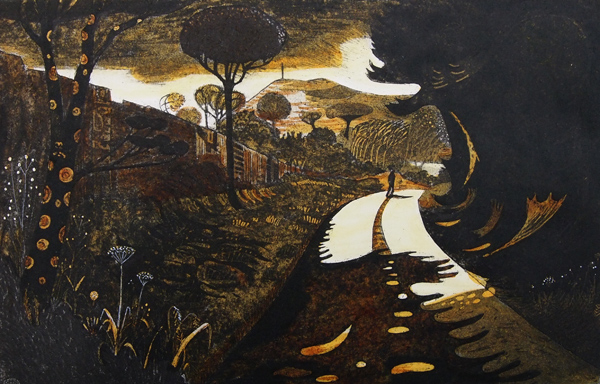 Kit’s time in Wales also reinforced his love of the natural world, and the majority of his work now focuses on real and imagined landscapes.

“The two are intertwined for me. My imaginary landscapes obviously refer to the natural world and landscapes I know, but their order is more to do with the internal workings of my mind,” Kit explains. “When I moved to Wales I was looking for a particular kind of landscape and found it eventually on the borders of Powys and Shropshire. It was like going into an ancient pastoral world where the only signs of modern life were the odd telegraph pole or plane flying overhead. I had found Samuel Palmer in the 21st century and knew straight away that this was where I wanted to be. Those landscapes are still an inspiration to me and I go back several times a year to paint and draw. I also take a lot of photographs of plants and lanes for reference.”

Through his artwork, Kit says he is aiming to explore the idea “that the divine is nature itself. Really it’s a pantheistic feeling. It’s a spiritual communion with the earth and the spirit of place that I aim to express in my work. I’m not trying to picture the reality of a landscape as it actually appears, but more to express my personal feelings in the landscape. A lot of my images are quite dark and reflect an internal world rather than the material outer world.” 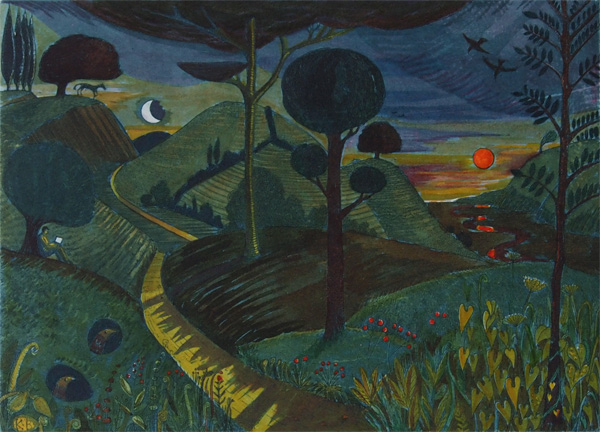 Kit’s work reminds me of the walks I used to take with friends as a teenager, strolling through fields and up hillsides with only the moon to light our way. Even today a sense of serenity steals over me when I step into a city park after nightfall, just as all more streetsmart people are skirting its edges because of the dangers it potentially contains.

“I love making something that seems to come from nowhere, and which has a life out in the world connecting to other people,” says Kit. “It feels magical when this happens, which is why I prefer making imaginary landscapes to real places. Tapping into the subconscious, you are also accessing a deeper truth about yourself and your place in the world.”

Find more of Kit’s work online at www.kitboyd.com. He also shows in several galleries in London: Greenwich Printmakers in Greenwich Market, and Skylark Galleries in the Oxo Tower, Rostra Gallery in Bath and also at the Affordable Art Fairs in Battersea (autumn), Bristol, and Hampstead, and also Edinburgh Art Fair each November.