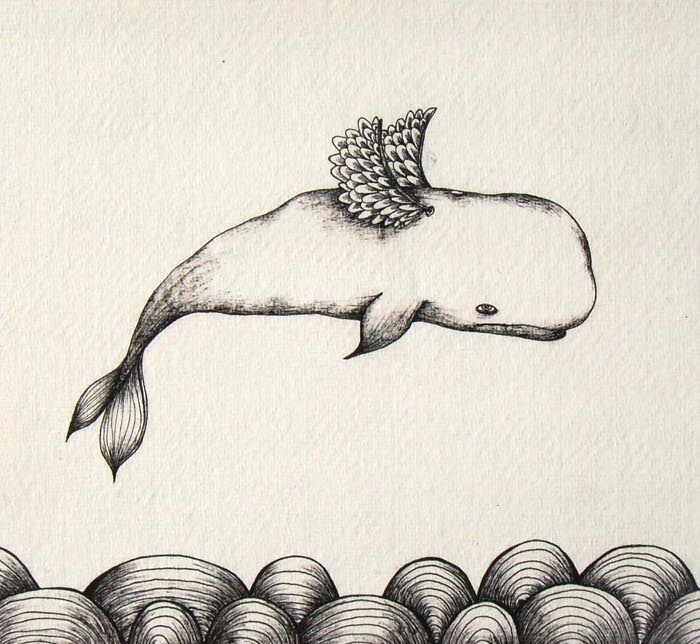 Ever seen a whale soar through the air, just skimming the tops of the waves with its tail trailing behind? No, me neither, but this picture by Lina Lofstrand makes me feel like that’s just because I haven’t happened to be in the right place at the right time to glimpse one.

“The Flying Whale is a whale with really small wings so he can only jump out of the water and stay in the air for short periods,” Lina says. “He uses this technique to see if any of his family or friends are close by.”

All of Lina’s work offers up this sense of a world sitting beside ours, or perhaps entangled with it but only visible as reflections in raindrops and oil-slicked puddles. In other words, the overlooked magic in everyday life. 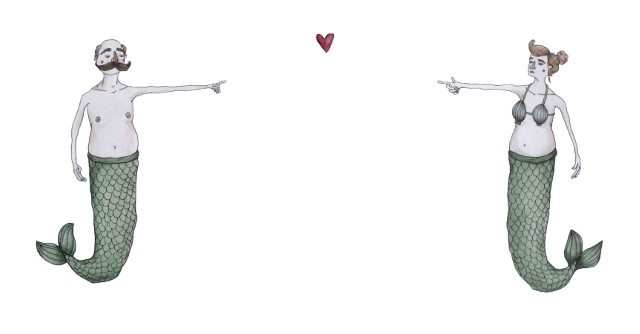 “I’ve loved drawing and making things for as long as I can remember,” Lina comments when I ask her how she got started. “When I was little I used to scribble on receipts and bits of paper from my mum’s bag whenever I had to sit and wait. I don’t think I ever decided to become an artist, more that I was lucky enough to find a way to continue drawing and also make a bit of money from it.”

The marine theme, Lina explains, comes from “growing up in Sweden close to the sea. I use to take the dog for walks and watch the ships come in or leave Stockholm’s harbour. Both my mum and my brother are professional sailors so a lot of my inspiration is from my family and the stories they tell me. My mum and stepdad have been living on a boat for the last four years and are travelling the world together.”

The majority of Lina’s male characters boast impressive facial hair, which she said is “ partly from looking at old photographs of sailors and sea farers with big beards and moustaches, but also because it’s fun to draw and gives a lot of character and personality to the figure I might be drawing!” 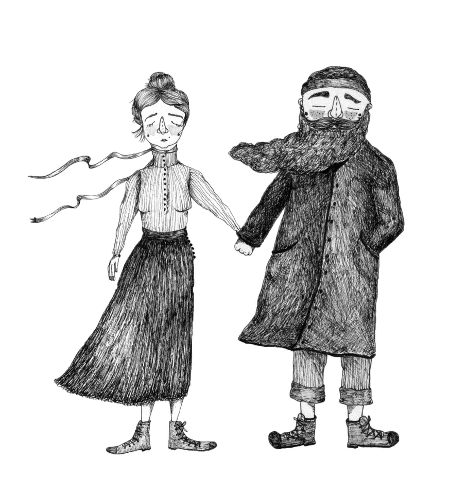 Lina built on her early love of creating by studying a Drawing and Applied Arts degree at University of the West of England. She’s now a member f Blaze, the artist run co-operative in Bristol you may have seen mentioned on SkyLightRain.com before. “I make most of my art in my basement studio at Blaze, and sell the things I make in the shop upstairs,” she says. “I also do a lot of markets where I sell my work and get a chance to meet with people and other local artists.”

I really enjoy how much personality Lina imbues her drawings with – many of her characters look like they’ve escaped from a children’s book or fime – Alice in Wonderland and Labyrinth both spring to mind. Lina’s heroes include American author and illustrator Edward Gorey, an influence evident in many of her line drawings. She also find inspirations in the work of “Scandinavian artist Carl Larsson’s beautiful paintings and Sven Nordqvist  and Elsa Beskow’s children’s books illustrations.” 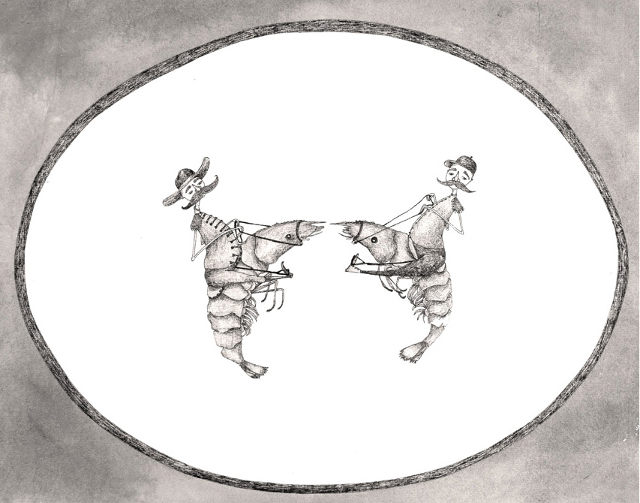 She adds. “I love working with my hands and creating something that didn’t exist before, either from clay, fabric or just a blank piece of paper. I really enjoy being able to give life to characters and places from my imagination. Shrimp Riders is a bit of a joke of what I think the mounted troops would look like underwater, where they ride shrimps instead of horses and look rather goofy!”

Lina finds inspiration and ideas “very easily and feel like time is never enough to make all the things I want to! Mischievous Marauders is a watercolour painting under the theme Allotments that I did as a part of a group show for a shop in Bishopston. I made it last summer after a particular unlucky season at my allotment where there were a lot of hungry animals that nibbled my crop!” 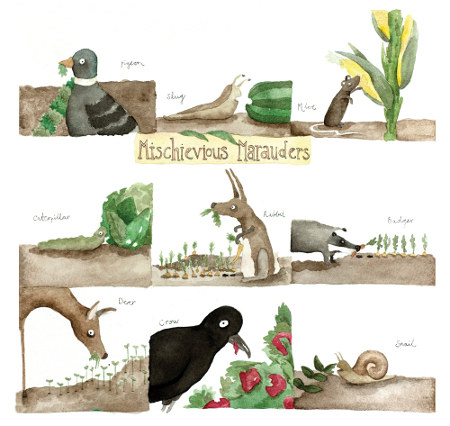 Other inspiration sources include “meeting people, being outside in the nature and animals. I get a lot of ideas from the pine woods in Sweden and the animals that live there, but also from people I meet or see around in town.”

In fact, seeking out these ideas and finding ways to capture them on the page fuels Lina’s creativity more than anything else does.

“I love the freedom drawing gives you to create your own characters and imaginary worlds. I love finding inspiration in everyday life and using that to create my own imaginary characters.”

Find Lina’s creations at Blaze in Bristol, on www.linalofstrand.com or at her Etsy shop  Lina Makes.