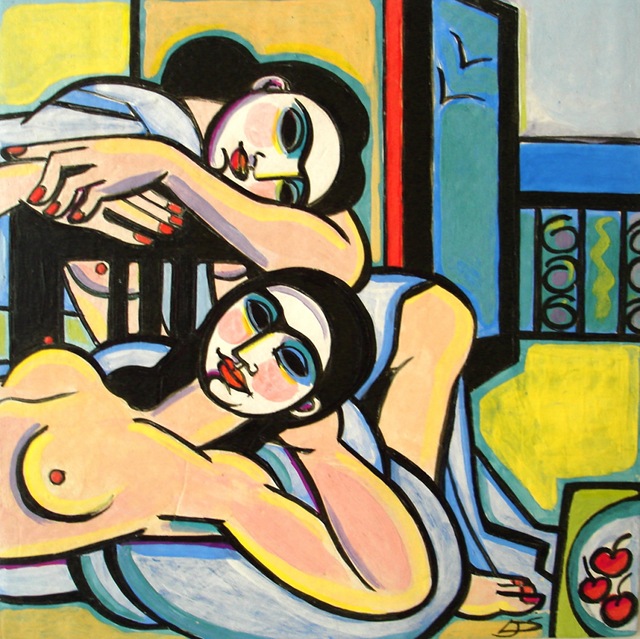 The figures in Linda Samson’s artwork exude a distinct sense of solidity. Captured in paint, pen and ink or ceramics, they inhabit an enviably tangible space, as though they live deeply felt, vibrant lives just beyond their frames.

This impression makes sense to me when Linda explains that she draws inspiration from the Oceanic art of the Pacific Islands and, most recognisably perhaps, the monolithic statues of Easter Island.

“I think the strong forms came initially from my discovery of Oceanic art and the joined or reflected images from a study I did at the British Museum of conjoined twins,” Linda says. “Being traditionally trained at Glasgow School of Art, life drawings formed the foundations of my figurative style.” 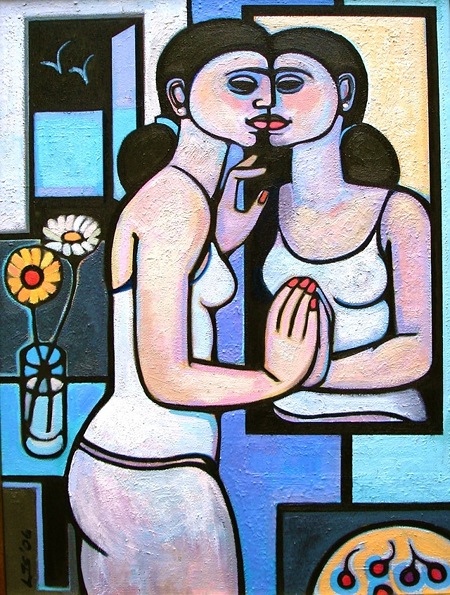 The Bowl of Cherries, oil on canvas © Linda Samson

Linda moves happily between a variety of mediums, including ceramics, oil paint on canvas and drawing.

“I don’t have a preference for one technique in particular,” she comments. “In fact, I like the way an image will change and develop depending on the medium used. Having said that, I’m probably more emotionally attached to the oil paintings, probably because these take longer to make and go through so many changes in the process. They are a struggle, a challenge and therefore much more satisfying when resolved.”

Linda was born in Glasgow, but moved over to Scotland’s east coast with her family when she was still very young. “My early childhood was spent exploring the coastline of sand and rocks, experiencing howling winter gales, wild seas and surprisingly hot summers,” she remembers. “As a child, the sea and sky seemed immense to me, and thus as an adult, they’ve become dominant factors in my work, as have birds, the effects of the wind, the sun and the rising moon; glimpsed through a window or a door, they often feature in the enclosed spaces of my paintings.”

Linda’s vivid use of colour is another reflection of her Scottish background, she says. “The cool light of the north makes colours appear very luminous, especially the pinks, oranges, blues and turquoises that have always featured strongly in my paintings and ceramics.”

More recently Linda has found her work influenced by a passion for the French capital city.

“I was a teenager when I first visited and fell in love with Paris,” she says. “I returned regularly, mainly to visit galleries or particular exhibitions. However, in recent years I stayed for longer periods and started to explore the city.”

The result is a series of ‘genre’ paintings and ceramic pieces about people glimpsed “on buses, in brasseries, outside a department store, or a scene spied from a window or glimpsed in a park. I drew these images from memory on returning to my apartment and later worked the images into paintings, ceramics and etchings.”

She adds: “Paris never seems to change, certainly the inner city with its boulevards and little back streets. It has an enduring familiarity. It also has a strong identity that makes my job as an artist easier to carry out.” 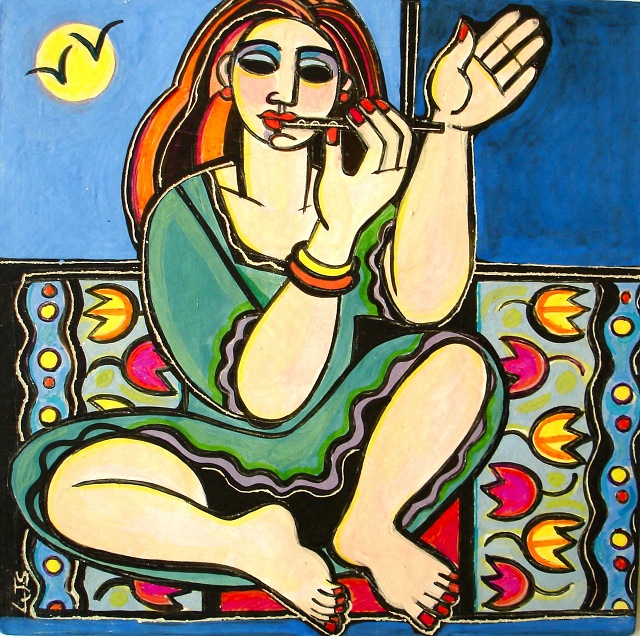 Linda’s other series come about in a variety of ways.

“I don’t think I deliberately seek inspiration,” she says. “Usually I come across an idea or an image in everyday life that then begins to evolve into a subject for a painting or a ceramic. I do trawl through the past, memories, sketchbook notes, doodles, drawings, but mainly to look for connections to flesh out and build up these newly discovered images. I’ m also constantly drawing new images that sometimes suddenly spring into a life of their own.”

Examples of this include the Bird Woman ceramic tile painting (one of my personal favourites), shown below. 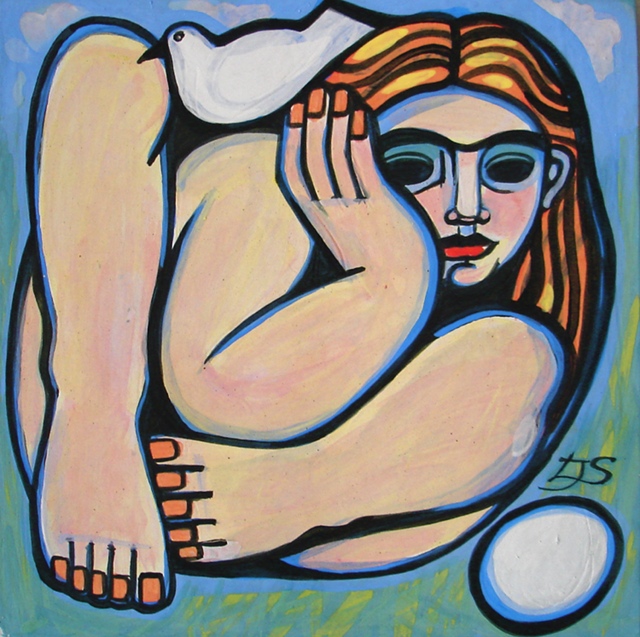 Often, Linda mixes her initial observations in with “a melee of historical references, poems, dreams, memories, emerging as an composite image in a structured space which asks for a response from the viewer. I play around with various versions till I get what I want.”

The finished pieces hold a quality of stillness, which Linda believes balances the constant searching and reworking of images and ideas in her head. “I can see, looking back, how important the effect of a new environment has on my work, and how everything I do, see and feel is translated back into the art I produce. For me, the reservoir of the past is a constant source of creative energy in the present.”