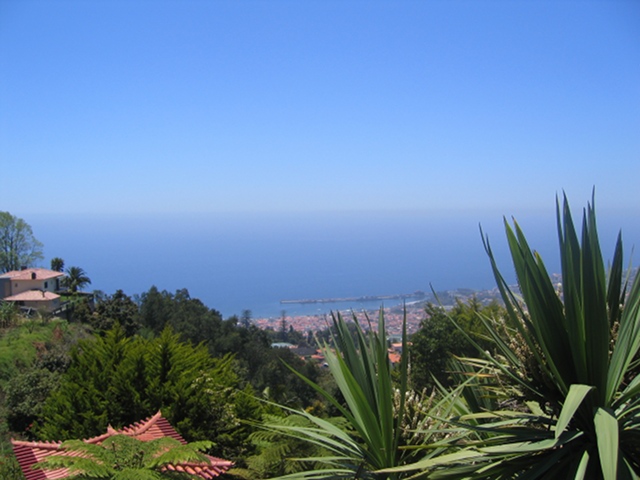 A longer version of this feature was originally published by Portugal Magazine in 2007.

Much loved by British holidaymakers, Madeira is an island of exotic flowers, friendly locals, and more than its fair share of luxury hotels. An evocative, mountainous landscape is a constant reminder of the Madeira’s volcanic origins, while the Atlantic Ocean is visible from every terrace and balcony. Reputedly first discovered by an eloping couple shipwrecked on its shores, the island whispers legends from its valleys to its peaks, making it the ideal location for a romantic holiday.

Choosing the location for the perfect honeymoon isn’t an easy task, even, or especially, if one half of the newly wedded couple is a travel writer. Prior to our wedding on 25 May 2007, James and I looked at countless destinations, considering Mexico, Hawaii and the Azores, before coming across a brochure about Madeira. Described rather deliciously as a “floating garden”, the island seemed to be largely overlooked by the crowds of tourists who descend on other tropical paradises – a fact which appealed to us both. Five days after our wedding, we caught a TAP flight from Gatwick, and landed on the island’s tiny runway just over three hours later. 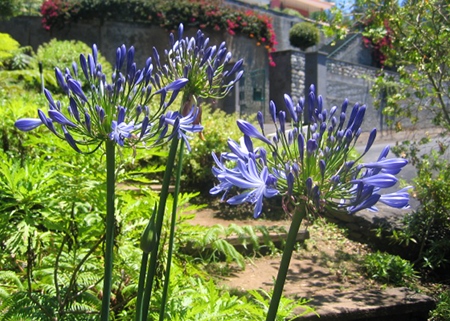 Our first impression of Madeira was how luscious and exotically green it is, with volcanic hills rising steeply from the Atlantic. The journey from the airport to Funchal would once have meant several hours of travelling across the hummocky terrain, but today a network of tunnels have cut this journey down to 15 minutes, with sea views offered at every turn. 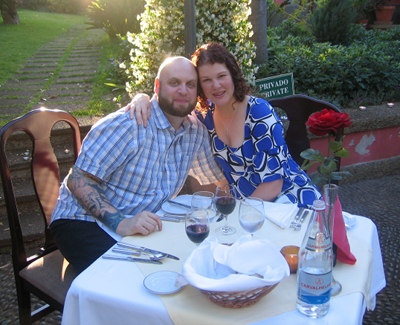 Our destination, Estalagem Quintinha de São João, is one of the many hotels that were once the grand homes of wine merchants. As honeymooners, we took advantage the hotel’s romantic package, which meant we were allocated a vast suite overlooking the pool, and found a bottle of champagne in our living room on arrival. As we stood on one of our two balconies admiring the dramatic mountains beyond the pool, we breathed in deep and discovered an aroma of flowers and herbs, something we would enjoy wherever we were over the next few days.

On our first day, we caught a taxi to Funchal’s harbour where we met the crew of the Gavião, the yacht that was to take us to the Desertas Islands. The six other passengers included a pair of Spanish ornithologists who spent the three-hour journey looking out for seagulls and other birds wheeling over the waves. 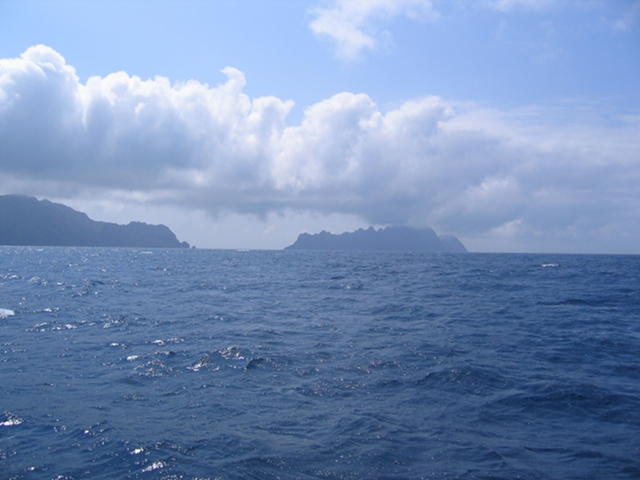 After a couple of hours the Desertas Islands appeared on the horizon, looking disconcertingly sinister. A vast cloud hung over much of the island, casting a cold shadow over the sea. 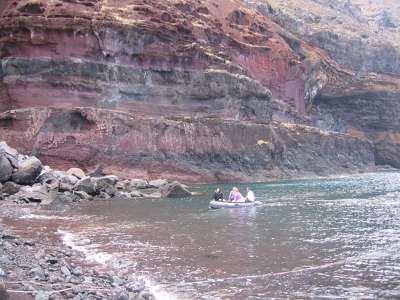 We took a dinghy to shore and meandered along the pathways, cautious not to stray and damage any rare native plantlife. As well as plants, the reserve is famous for its tarantulas, but the only wildlife we saw were tiny green indigenous canaries, and the researchers who live in cabins on the isle for weeks at a time.

On our way back to Funchal, our captain made contact with a tourist vessel that had come across some dolphins, and we sped over to see them. They darted around the prow of the boat, sleek and beautiful in the astonishingly clear water.

Soon after breakfast the following day we walked to the town centre, enjoying the fact the layout of the town means everything is within easy strolling distance, with the main attractions at the lowest point, spread along the waterfront. Glowing pink swathes of bougainvilleas and purple jacaranda trees brighten the profusion of concrete, while the central streets are patterned prettily with white marble and black basalt cobblestones.

With a full day of sightseeing scheduled, we headed straight to Blandy’s Madeira Wine Lodge. This sweet-smelling series of buildings houses vast barrels of wine, with the youngest stored in the attic where the heat of the sun improves their caramel flavours, perfect for offsetting the rich, moist Bolo de Mel cakes. 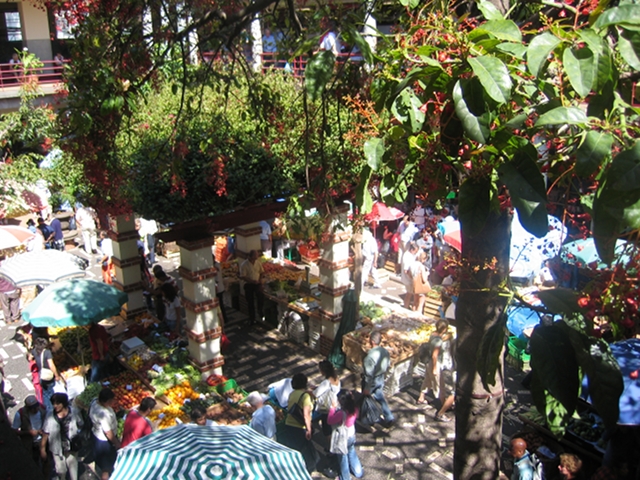 At its most vibrant early in the day, Mercado do Lavradores lies close to a bridge where the island’s most copious residents sunbathe: beautiful bright green, orange and brown lizards with long tails and sweet little faces. Within the market gleaming fruit, vegetables and flowers are piled like jewels, pawed over by locals and tourists alike. At the insistence of one stall owner, we tried slices of pale creamy custard apples with knobbly green skins like a turtle’s shell.

For panoramic views over Funchal, we rode the cable car from the waterfront to Monte, a peaceful 10-minute swoop over the houses and terraced green hillsides, coming to a halt just outside the Monte Palace Tropical Gardens. 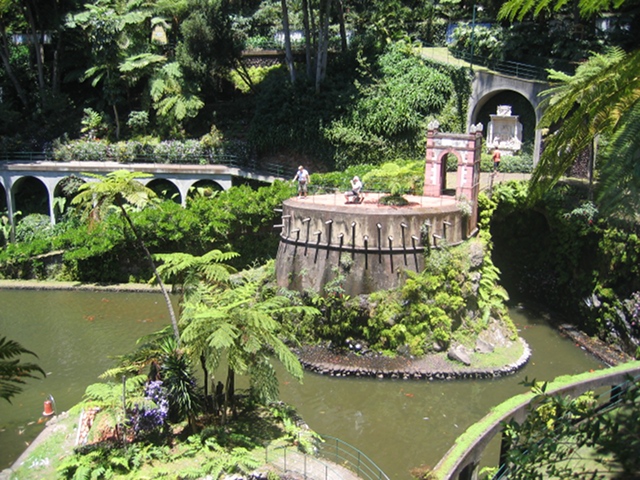 This is the perfect place for a romantic stroll, exploring the shady paths and stepped walkways. A lake of Koi fish, entranced by the patter of multiple waterfalls, provides a sense of tranquillity, as exotic dragon trees bleed red sap and Love Flowers glow blue against the deep green foliage, adding splashes of colour. The Japanese Garden is home to a number of serene statues of Buddha, while in other areas sculptures, ancient panels of traditional tiling, and the largest vase in the world can be found among the leaves.

We headed to Quinta do Monte for lunch, a hotel with its own small chapel where couples can get married before holding lavish receptions in the airy, light-filled restaurant. The meal was one of the loveliest I’ve ever eaten, starting with a refreshing salad of lettuce, walnuts, apple and smoked salmon, served with a light yoghurt dressing, then tender pieces of veal followed by apple tart and ice-cream, all washed down with Madeira wine. 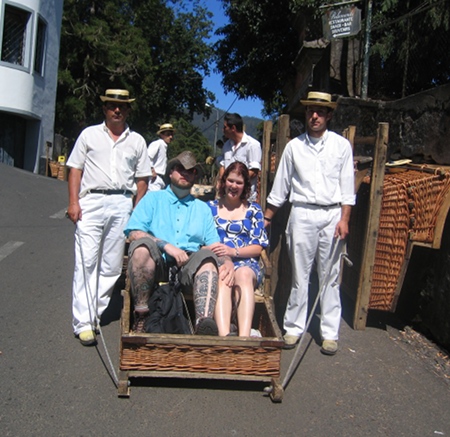 Refuelled, we were ready for our toboggan ride down the steep hill, steered by two men dressed in white and wearing straw hats. The descent is completely undignified, but great fun. It is a hilarious journey of twists and turns that must have seemed terrifying to the 19th-century ladies who once used this method of transportation, before being carried back up the hill in hammocks.

The final treat of the day was a trip to Cabo Girão, Europe’s tallest promontory and the second highest in the world – standing 580 metres above sea level. Breathing in the scent of eucalyptus trees, we stared down the dramatic cliff to the deep turquoise of the Atlantic Ocean, stretching all the way to the horizon to meet the vivid blue of the sky.

Then it was time to leave the city and head for the Choupana Hills Resort and Spa, where we were indulging ourselves for our final days on the island. 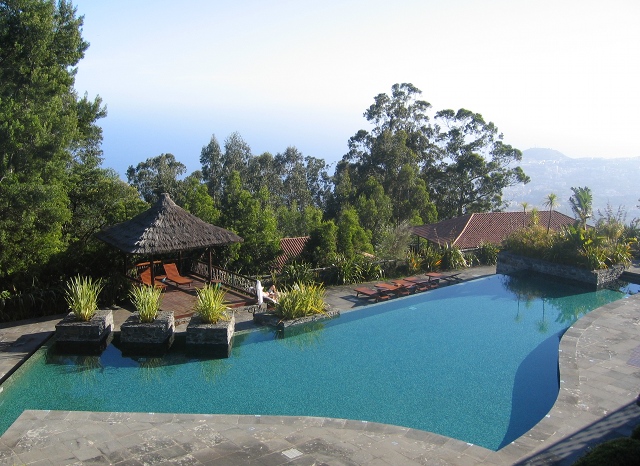 As soon as we’d checked in, we headed for the resort’s leisure facilities, wallowing in the indoor pool with its bubbles and the outdoor infinity pool fringed by palms, with dragonflies darting overhead. 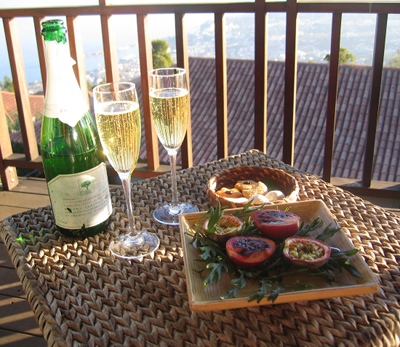 As the shadows began to lengthen, we hurried back to our room, planning to change and return to the hotel’s Basalt Bar for cocktails, only to discover that the chambermaids had left us a chilled bottle of champagne. Retreating instead to our balcony, we sipped our fizz and watching the sky turn gold and crimson above Funchal Bay.

As the city’s lights sparked on, the final traces of colour ebbed from the sea and darkness took over. My husband and I smiled at each other and vowed to return. What better way to celebrate our future wedding anniversaries?

Find out more about Madeira as a holiday destination. 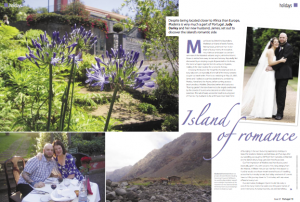 To read this feature as it originally appealed in Portugal Magazine issue 27, click here.