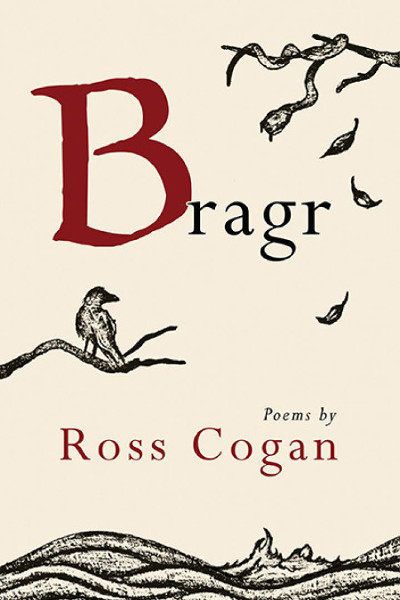 Bragr is Ross Cogan’s collection of entrancingly personal poems inspired by Norse mythology. Quite simply he picks up Earth and its neighbouring galaxies, gently placing them where we happen to sit or lie so that we nestle with wonders.

I found myself reading most poems more than once – firstly for the pure beauty of the word choices and secondly to drink in the meaning of the piece.

In Part 1, The Beginning, And The Rest sweeps us beyond the presentation of a creative act – writing, painting or music – and draw us to the exquisite nature of the silence just beyond that last fading note.

There’s a playfulness to the assortment – from the evident delight of selecting the perfect phrase to conjure a scene or emotion, to the joy of regarding the world and its surroundings, to summon up origin stories of time and humanity and pin them to the page.

Underlying it all bubbles as an unexpected quaintness that speaks to the universal feelings at the core of each of us. Gazing out at the stars or to the seething heat beneath our feet, Cogan acknowledges the crux of humanity in poems like Willow, delivering with a wry nod to our innate dissatisfaction the line: “We rarely want the miracles we’re given.”

In Traefisk, creating a work of art becomes a collaborative act that sings with the joy of collusion, right down to choosing to hang the finished article in a place “where the light could fin it, white it might/ just be confused with something that can fly.”

Elsewhere, a frostbitten toe in the cosmos becomes a comfort in the dark, and a god rises on thermals in a falcon’s skin, and fish sing with “tinfoil voices.”

It’s that trick of combining the every day with the astral and the mundane with the uncanny that pours Cogan’s poetry from the page into our minds.

In part two, aptly named The Bestiary, Cogan narrows his gaze to the animals, introducing us to the world’s wild menageries of seagulls, rats, snakes, hares and moon-swallowing toads. In each, he can’t help but draw parallels between himself and the observed creature, most notably in Otter, where: “Its old man-monkey hands worked on a cake/of salmon” and we watch it let the water pull it away, “’til just a bobbing dot of skull/ was left; a skull that might have been human.”

In Ravens, he carries us close to the gods of old again, as they visit “past and future”, sent to spy on scandalous secrets. Cogan’s power to bend an image to his will is striking here. The ravens are “Black thoughts” with “soap-bubble plumage”, and “Black memory, a battered purse”, who “shrink to twin pupils/ beneath a cloud’s brow.”

Part 3, Ragnarök, highlights the dichotomy of mortals and immortal. The word representsa series of future events,including deaths of various gods, drawing our attention to our vulnerabilities – if even those great figures of Norse mythology can perish, what of us?

Line after line, I felt myself being allowed into the secrets waiting between light and shade and the magic just beyond the peripheral of vision. This is old enchantment, elemental and eerily familiar, as though we’ve temporarily forgotten that just yesterday gods walked among us and we were on intimate terms with the stars.

Bragr by Ross Cogan is published by Seren Books and available to buy from Amazon.