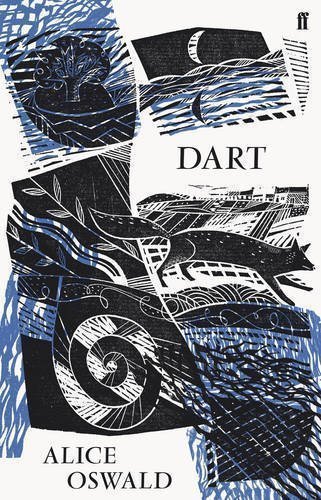 Following the journey of the river Dart from its source to the sea, Alice Oswald has woven a work of meandering voices that conjures up every person the water encounters on its way.

Using three-years worth of recorded conversations as her starting point, Alice has summoned up the river’s many aspects and visitors, from an elderly hiker carrying “tent, torch, chocolate, not much else” to a naturalist “hiding in red-brown grass all different lengths”, to a forester “knocking the long shadows down”, to a young, drowned canoeist, and the result is a quiet yet powerful deluge you can dip in and out of at your leisure or allow to carry you along at a rate of knots.

I began to read it shortly after Christmas, during a train journey that cut through Somerset’s flooded countryside, where fields had been transformed into shimmering swamplands. It felt curiously apt.

Alice Oswald has a mastery of language that summons up the rhythms, wonderings and wanderings of the river and its people: “I wish I was slammicking home/ in wet clothes, shrammed with cold and bivvering”.

You don’t need to know each word’s precise meaning to understand the feelings they offer up.

With Alice as our guide we experience “Dartmeet – a mob of waters/ where East Dart smashes into West Dart”, and watch as the water “orders itself like a pack of geese goes up/ first in tatters, then in shreds then in threads.” It’s an engrossing, intoxicating voyage, proffering fragments of thoughts, conversations, and glimpses as a train journey fleetingly thrusts in fleeting views of gardens and homes with uncurtained windows.

Alice’s notes in the margin interrupt the flow a bit, but provide an insight into the energy behind the words – the tale of Jan Coo, or the history of the dairies that use the river waters to cool their milk, for instance.

There are moment of such harmony that it’s breathtaking, as in the section where the millers discuss the ways in which they stretch and wind the wool as the river stretches and winds: “a two-ply, balanced twist, like the river.”

These are the people who strive to move the river to their own needs, along with the tin-extracter, the stone waller and even the sewage worker. Bringing together history and myth, poetry and prose, research and imagination, Alice has created an homage to our dependency on the Dart, and all rivers, as it slithers past, reflecting the weather on its way to its ultimate destination.

All too soon, the river meets the sea, but the stories don’t end there, instead bringing in the voices of dreamers, boat makers, naval cadets, salmon poachers, and, finally, the seal watcher. The perils of the sea rise up as salt and sweet water come together.

And through it all, the river is alive – a creature as variable and contrary and yet as single-minded in its aims as the animals it houses, and the humans it sometimes tolerates.

This is more than the story of a river, it’s an interpretation of a “jostling procession of waters”, “with its language of oaks/ and clicking of its slatey brooks.”

Dart by Alice Oswald is published by Faber & Faber and available to buy from Amazon.