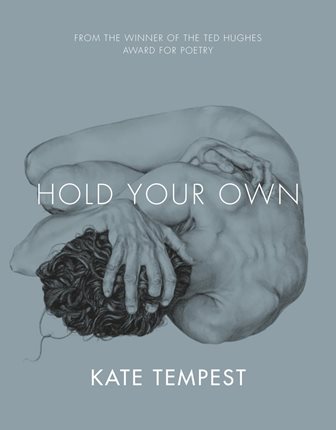 Taking the myth of the blind prophet Tiresias, Tempest sets out her own thoughts about identity, love, sexuality and growing up, and sets them alight.

Tempest is no newcomer to the UK’s poetry scene. A regular at London’s rap battles from the age of 16 (she’s now 28), her work has since expanded and shifted poetry-wards with performances at London lit night Bookslam, before taking Wasted, and then the award-winning spoken word performance Brand New Ancients on the road, and across the Atlantic. Oh, and this year her first album, Everybody Down, was nominated for a Mercury Prize. Kate’s goal, you might agree, is self-expression by any and every means possible.

She self-published her first poetry collection Everything Speaks In Its Own Way before coming to the attention of Picador, who have brought out her coming of age collection stapled to the tale of the gender-shifting prophet.In Greek mythology, Tiresias was best known as the prophet transformed to a woman for seven years, then doomed to speak the truth to people who ignored him. Kate highlights this by painting him as the homeless crazy on the corner, and by taking us through apparent glimpses into her own moments of love and loss, when gender seems permeable concept and feeling safe is as important as the outside world.

Her spoken word background ripples through verses, many of which have more impact read allowed than consumed quietly on the page. And while much of the time a neat rhyme is offered in lieu of breath-taking metaphor, it’s clear to see a depth and maturity appearing in her writing. Simple lines snagged my attention and showed me the possibilities Tempest is playing with: “I told the stories; they did the sounds./ We painted potatoes whenever it rained.” The innocence of childhood is vivid in this section, as she recalls encountering a couple shagging in the park (reflecting Tiresias’ experience of encountering two copulating snakes), long before she understood what they were up to, and conjures up the dizziness of allowing an older girl to stuff “a pair of socks down my pants/ straddled me and called me big boy.”

There’s a sense of glimpsing raw written journal entries – this is Tempest at her strongest.

It’s clear she’s still trying to find the ease in herself, as she talks in ‘Down The Pub’ of trying to hold the attention of the man she wants: “Beside me, with their slender waists and shipwreck eyes/ the girls were dancing, and I was dying.”

Not every couplet works. Some feel glib, crow-barred in to make a rhyme that isn’t actually needed, but others are on the brink of a power that once unleashed will be unstoppable.

These are the days in which Tempest is finding herself, forming herself, just as Tiresias is continually grappling with his own permeable form. It’s a duality made evident in the title – Hold Your Own, both a challenge to fight and a demand for tenderness.

One of the most powerful poems for me was one of several about Tiresias’ transformation into a woman, ‘The woman the boy became’: “Born to hold the world under her tongue”, in which she asks, almost as a lament, “How many yous have you been?”

To me it feels as honest as any of the more openly autobiographical pieces, and just as universal too.

Hold Your Own by Kate Tempest is published by Picador and available to buy from Amazon.