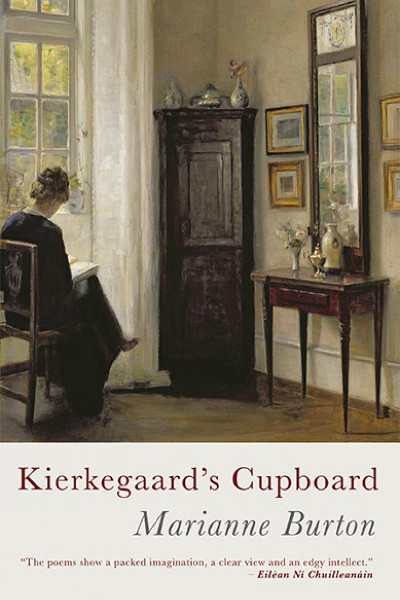 Biography as poetry is an enticing literary choice. Rather than asking us to ingest and retain the cumulative details of a life, we’re instead invited to mull over scattered and strung selections of moments which offer a suggestion of the sum of the whole.In

While the majority of poetry shares roots with autobiography, for the poet to focus on a historic figure is a more unusual, but when done skilfully, the results are hugely pleasing. Think magician’s act blended with both anthropology and archaeology, and thoroughly interlaced with respect.

In Kierkegaard’s Cupboard, poet Marianne Burton has unearthed and thoughtfully restored a scant horde of treasures from the archives of Danish philosopher Søren Kierkegaard. Throughout she has provided contextual signposts to help us understand the contemplations laid out before us, which support those of us new to Kierkegaard’s meandering preoccupations without intruding on the elegance of the poems themselves.

There’s a precision to Burton’s phrasing that shines up for me the image of a man keenly observant yet frequently fogged over by the deep intrigue of his own mind. Presented as a series of 14-line sonnets, the poems range from the yearning to the regretful to the at time bordering on furious, not least when it comes to journalists and others by whom he felt persecuted. Minor miracles such as a friendship with a stream are set alongside verses capturing mundane tasks handled with such care that they seem imbued with wonder.

Burton evokes too the complexity of being a person who sees the world from a viewpoint so unlike all others. In My Misfortune From Birth Was Not To Be Wholly Human. “I was not like others, something I so wanted to be./ A man can endure being a glorious oddity, the uncommon,/ But for a boy and a youth it is agony.”

In a more sanguine moment, Burton has Kierkegaard liken himself to a tree: “I stand unfettered, a solitary/ fir tree,/ a spire/ painting higher, ever higher.”

Far from being a history lesson or a wholly accurate pen portrait, these poems gather together to present a hint of the minutiae that make up the layers of a person’s mind, and the sense of having known him intimately, if for only the briefest pockets of time.

Kierkegaard’s Cupboard by Marianne Burton is published by Seren Books and available to buy from Amazon.