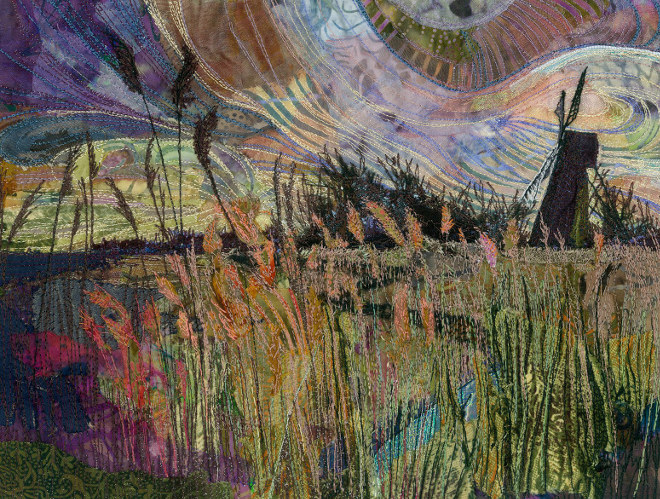 Reeds All About It by Rachel

Textile artist Rachel Wright recreates the world with a rich palette of threads, building up scenes that shine with beauty. She grew up surrounded by her father’s paintings, etchings and engravings, so felt that entering that world was a natural step, even if she did choose an entirely different medium as her paintbox.

“By the time I was in sixth form I was already looking for a university course in textile design,” she says.

Rachel was determined to bring her drawing skills together with her textile work, despite the fact that the college she attended really didn’t regard being able to draw an asset – “in fact, I’d go as far as to say they almost tried to beat it out of you!”

Happily, since leaving college, she’s had the chance to explore the possibilities offered by melding her talent for portraying the natural world with her fabric prowess. “They lend themselves to the fluid restless motion that I try to portray in my skies and seas.” 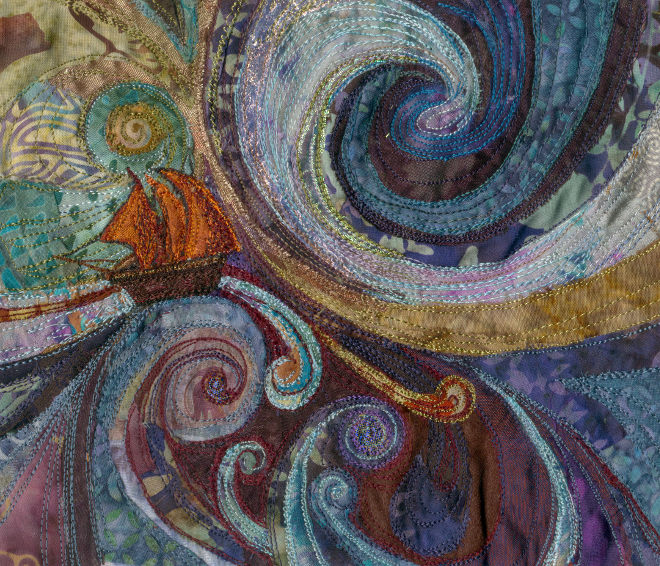 Any Port in a Storm by Rachel Wright

The vivid swirling shapes captured in her work conjure up a sense of energy and movement reminiscent of Van Gogh’s Starry Night. In Any Port in a Storm, above, there’s a palpable sense of peril and the drama of being at the mercy of a wild sea. To create a piece like this, Rachel selects the fabrics with care, and then machine sews them into the shapes that reflect the image in her mind. 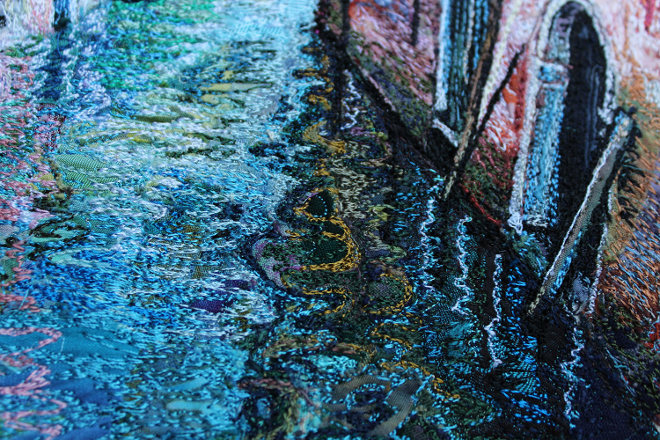 “My first love was hand stitching but it was taking me far too long to complete each piece and once out in the real world I needed to start earning some money from my work,” she says. “My grandma had bought me my first sewing machine – it’s 30 years old now and still the one I still use everyday!”

Selling her work offers an emotional benefit too. “It’s such an enormous pleasure to know that people are prepared to part with their hard earned cash, to own something that I have made,” she says. “I love walking into and exhibition and seeing those little red dots on my work. It’s the best feeling!”

Her earliest pieces were beautifully abstract embroidery works, which provided her with the training to create the vivid landscapes and seascapes she’s now known for.

“I learnt a lot about using colour and composition, all of which stood me in good stead for the landscape pieces – using using fabrics, with all their wonderful colours, textures and patterns as my palette and threads as my paintbrush, adding in the details.”

Starting a brand new picture is the hardest thing, she admits. “I call it ‘Blank canvas syndrome’. Sometimes even the housework can suddenly seem like an attractive proposition when I should be starting a new piece. I really don’t like the beginning but inevitably, once I dive in and get going it’s usually only a matter of an hour or so before I’m hooked again.” 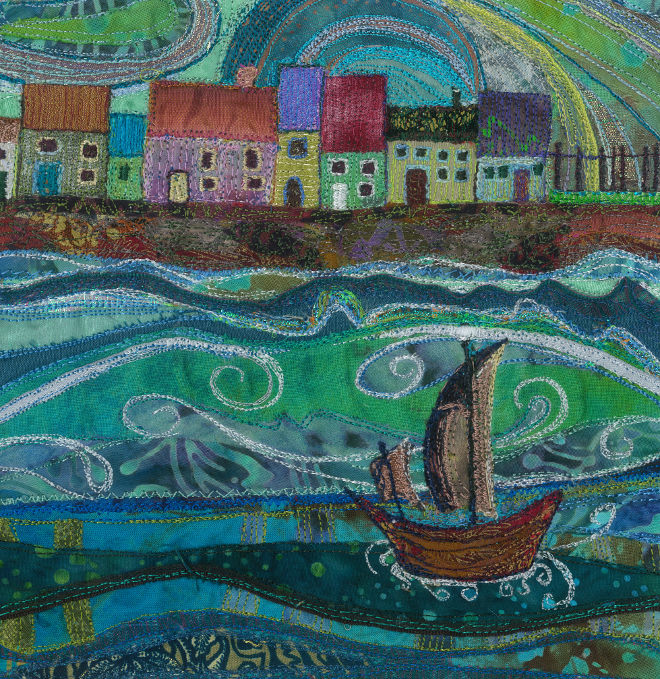 Rachel likes to work from photographs taken on walks or family holidays. “When I start to plan a piece, I will often sketch directly onto the calico before starting to work in the fabrics, “ she says. “I always like to have an image or several images to work from. I may not translate them literally but I think it’s important to know how something actually looks before you can start to play around with it.”

She adds: “My kids often get asked to draw things at school but are not given any reference to look at. It makes me mad because my dad always taught me to spend twice as long looking at the thing I was trying to draw, as I did actually making marks on the paper. Seeing what is really there is at least half the battle. It’s in noticing the small things that something becomes lifelike and realistic.”

That said, she has a passion for letting her creativity have free reign at times too. “I certainly like to allow my imagination in on the act. This is probably most evident in my foaming, swirling seas or my dynamic, dramatic skies.”