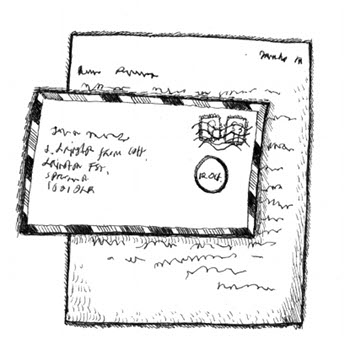 The tenth story in my debut short story collection Remember Me To the Bees is The Scent of Summer. This tale began life in a short story workshop, when we were each presented with a postcard and invited to write a story about it.

Mine showed a family of four standing awkwardly in a back garden. They looked so very ill-at-ease it made me wonder whose garden it was, and why they were there. This made me think about how one misfortune can lead to another, and the strains this can put on an family. As the character of the younger daughter, Jo, grew in my mind, I knew I wanted to give her the mission of bringing the family back together.

An earlier version of the story was highly commended by the Frome Festival Short Story Competition committee. The version of the tale in Remember Me To the Bees resulted in me being invited to read it out at the Penzance Literary Festival 2013 – a fabulous experience!

The artwork is by Louise Boulter. If you read to the end of the story, you’ll understand why I chose to post the photo of poppies too.

A short excerpt from The Scent of Summer

Dad had been a postie for as long as I could remember, rising early each weekday to walk to the sorting office and collect his load. I’d go with him sometimes, strolling through the streets of south Bristol and listening to him greeting everyone he saw.

But a week after we moved in with Aunt Maura he got himself fired for stealing letters. It felt like a big mystery, big enough to hold the answers to all our troubles.

Dad’s bosses at the Royal Mail thought he was trying to rob money, taking the fat envelopes that might contain cash, but I couldn’t believe that. I found a few tucked into his jacket pocket, reeking of patchouli oil, and while he and Mum edged around each other in frosty silence I carried one away with me. Later, I slid the sheet of paper out of its envelope, inhaling the exotic fragrance.

“Where did you get this?”

“It’s a love note,” she said, surprised, then read aloud: “My angel, you keep my world in orbit. Yeurgh! Oh god, this could be one of the letters Dad nicked. Don’t tell Mum – they have enough problems right now.”

I remembered how Dad woke us at sunrise on his and Mum’s anniversary last year and dragged us down to the lawn outside our old house. Dad had rescued Mum’s bridal veil from the attic and she wore it with her nightdress – Kath said she looked like an angel in white glimmering against the shadowy garden.