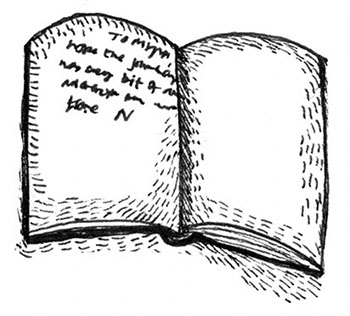 The 18th story in my debut collection Remember Me To The Bees is Flyleaf. A few years ago I spent several months travelling up the west coast of America, pausing in Portland for a couple of weeks. While there I dipped in and out of one of my favourite ever bookshops – Powell’s City of Books.

As I had been travelling for a while I’d accumulated a few books which, now read, I couldn’t justify the space for. I needed that space for new books to read! Powell’s buy second-hand books, but didn’t want the ones I had, so quietly, when nobody was watching, I ‘rehomed’ those books on Powell’s shelves.

But what if somebody had seen? What would they have thought of my actions? The thought amused me afterwards, and became the initial seed for this story.

A short excerpt from Flyleaf

She glances around furtively, guiltily, stuffs the book onto the shelf, and flits away. The reverse of stealing: surreptitious gifting?

I follow her at a distance, looking at the shelves she has been adding to, and find I can’t tell which books she has inserted. It seems that whichever volumes were retrieved from her bag have been placed in exactly the space for which they were intended.

Then I reach one where there was clearly no gap to fill, and see a book resting atop of the others, the same title and author, but not yet catalogued by Powell’s – an outsider in their midst. I pick it up, rifle gently through its pages, look- ing for… what? A note? A stray hair? A clue. I even raise it to my nose and quietly inhale, but it smells only of paper, perhaps of dust; pleasing smells but certainly not telling. The book itself is perhaps the one clue: Jack Kerouac’s ‘On The Road’. And scribbled onto the flyleaf: To Mara. Hope the journey is every bit as much of an adventure as the destination. Love N.

So now I have the woman’s name. The book is well-thumbed, presumably well-read, or possibly just worn out with being shoved into the bottom of a backpack. But why abandon a book that evidently meant so much to her?

She’s leaving the bookshop. I follow as fast as I can without visibly chasing her. I try to appear aloof, perhaps even a little self-obsessed, trying to maintain the persona I assumed on leaving the gym earlier this morning.