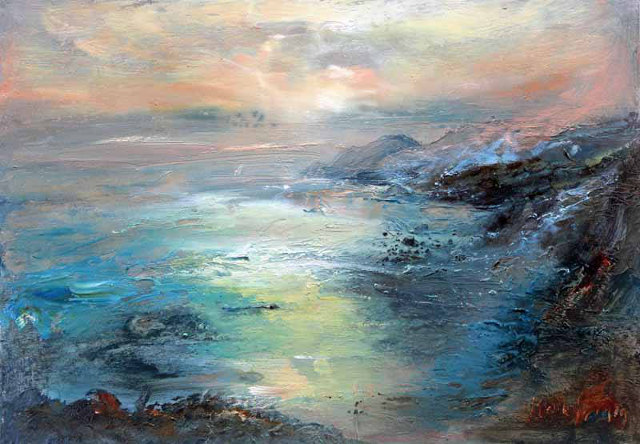 Steve Slimm’s art was recommended to me by SkyLightRain.com reader Irene Woodhead, and I was immediately drawn in by the vigour emanating from his work. His paintings capture coastal views with a stunning abstract quality, spinning together colour, form and light to offer up a scene as much about a place’s energy as its scenery.

Steve has been a working artist for 35 years now, a route he chose almost by chance.

“When I was seventeen I was working in the Civil Service, and was offered the chance of day-release extra curricular studies,” he says. “I opted to do landscape watercolour painting with a local artist John Miller, who was not too well known at the time, but became more internationally known later. He was very encouraging to me.”

He says this earned him enough “to sustain a meagre living, which paid my mortgage and helped keep a growing family.” To me that sounds far more than meagre! “My wife at the time also helped with the repping. Within a year or two, by doing the door-to-door work, I had met a number of people who helped me to get established selling in galleries – some in Cornwall, and others in the UK generally.” 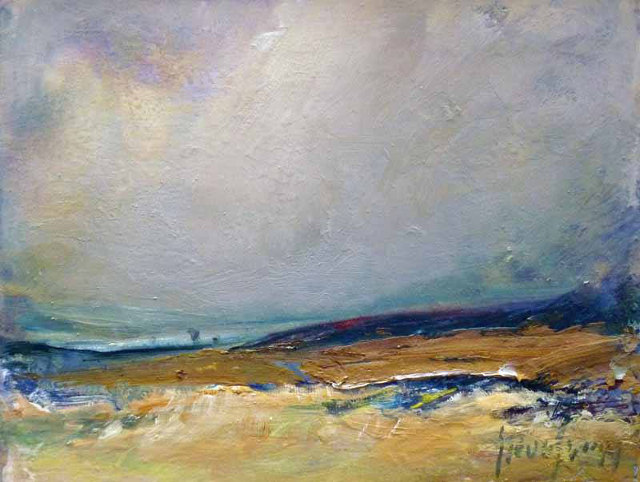 Steve’s passion for creative freedom isn’t only confined to art, either.

“Aside from painting, this includes a fair amount of music and writing,” he says. “I love the way I’m able now to have significant effect on people’s lives, as they tell me they find great spiritual uplift from my work.” 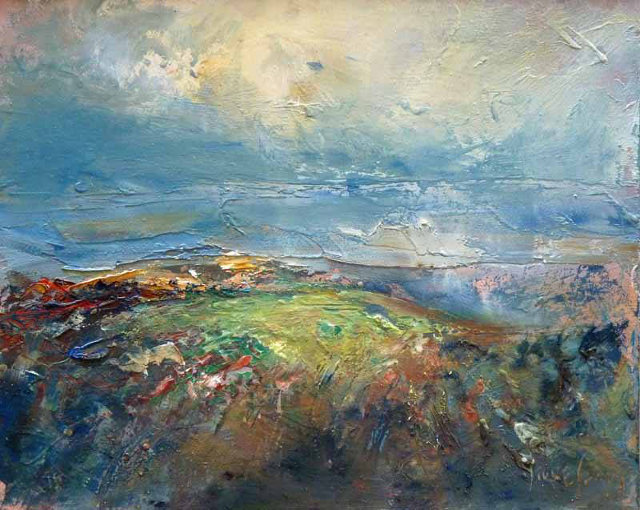 The physical act of painting is something Steve relishes. “I’m driven by the sheer love of applying paint to see how it forms itself,” he says. “I rarely place paint where I want it, but rather let it go where it wishes, although this is also in somewhat of a controlled way. The happenings in paint become central then to the work.”

This has always been true, he says, “first with watercolours for the first decade or so of my career, and now with emulsions and oils.”

The urge to sell his work is also exciting. “I can get more excited when I have some kind of extra exhibition approaching, or a new gallery to supply. There is always a sense of anticipation, expectancy and even fun – along with timidity – with new ventures.”

Ever since moving to Cornwall, Steve has been using his paintings to explore his love of the county’s coast and the open moorlands, as well as wild locations further afield. “All I wanted to do was express my feelings about the places – I’m not really interested in getting anything ‘right’ about either a location or the colours, or any of the details. It’s the feeling I’m after.”

He says he can’t see himself ever wanting to tackle other subjects other that  “the lay of the land, without much of man’s interference”, though he’s open to being proven wrong about this. “A couple years ago I got passionate about the Moors Murders – you know, Ian Brady and Myra Hindley, in connection with Saddleworth Moor, near Manchester,” he says. “I travelled there twice, and did a series of large abstract pieces connected to the feelings around those horrific events, but still very connected to the land.” 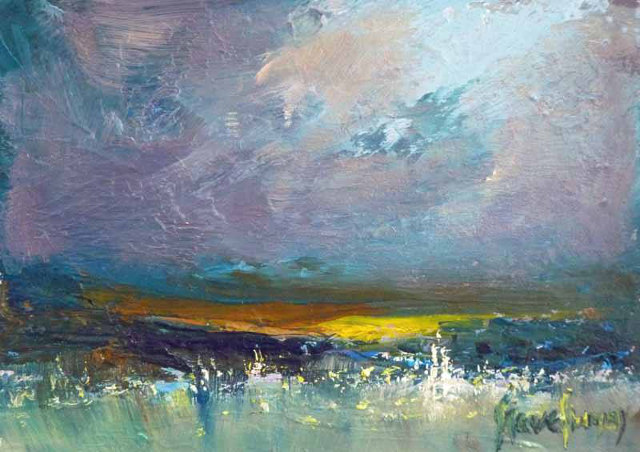 After the Storm © Steve Slimm

He adds: “I became even more enthralled with the idea that we are all one with the land, which is one of my central drives. The other is that the sky and the land meet, but in some way always merge together. You’ll seldom find a distinct horizon in any of my work for this reason. This idea forms the core of my work.”

Steve’s website steveslimm.com has links to various places where his work can be seen and purchased online and in galleries.