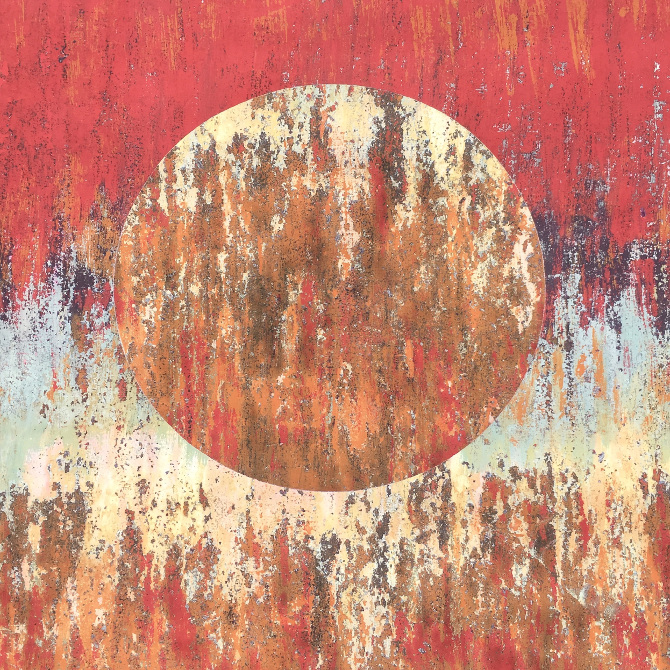 Alan James McLeod took a long and winding route to reach the abstract works he’s becoming known for. “I graduated from Edinburgh College of Art in 1990, in applied design, then became a freelance textile designer, producing hand painted fabric and wallpaper designs for companies such as Warner Fabrics, Habitat & John Lewis.”

Following “a long hiatus” during which he set art and design aside, Alan chose to return with a more fine art approach at the beginning of 2014, “but the design background is always there.” 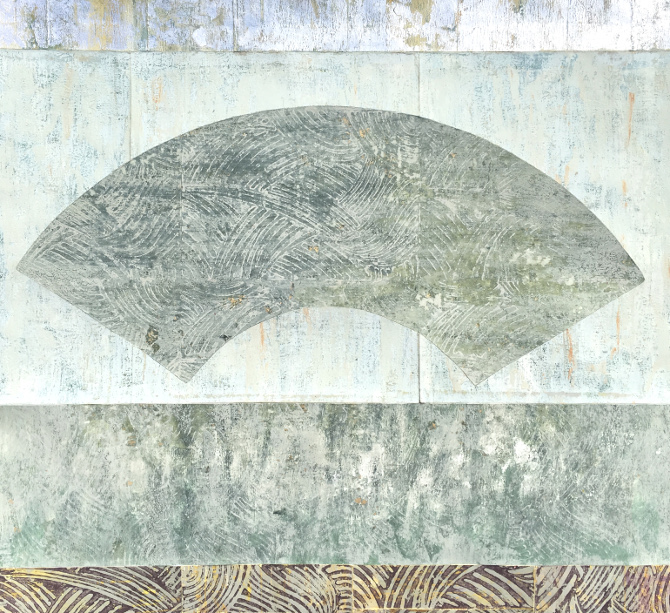 An Echo of the Story by Alan James McLeod

The delicious textural look to Alan’s artwork is created by handpainting papers he then collages. The result is an intriguing resemblance to unearthed artefacts or enticingly  weatherbeaten ephemera.

“At college I used to paint on top of oil pastels, then scrape through to create designs,” he explains of his technique. “This developed to layering the paint colours on top of each other, using clear wax instead of the oil pastels. Lots of scraping and washing, leaving out in the rain, anything to reveal what’s underneath.”

He developed his unique style through a balance of “not worrying about the outcome”, embracing “happy accidents to push my work in different directions” and endeavouring to produce individual pieces “that reminded me of something, and that have some sort of resonance or depth. Papers that are too ‘surface’, can be useful in my work as well though, as they can be overworked or gilded to bring them to a level of usefulness.”

Being away from the art world for around seven years was useful in its own way, as it showed Alan how intrinsic art had become to him. “I was missing a big part of my life, and after work I would head upstairs to our spare room and start sifting through old textile designs, found papers and postcards.”

Before long, Alan started making little collages. “This was purely for enjoyment’s sake. It wasn’t until 2012 that I decided to try a couple of them in a gallery.”

He describes moving house a catalyst for taking his work to a new level. “At the same time as I was taking my art more seriously, my surroundings were unfamiliar, and not giving me the inspiration that directed my work. This is when a more cerebral approach took over, with my imagination coming in to play.”

Alan felt that collage work using found papers, was already a crowded area. “Many artists have mastered college, one of my favourites being Kurt Schwitter.”

To ensure an originality in his own work, Alan decided to focus on creating his own unique painted papers as the medium for his collages. 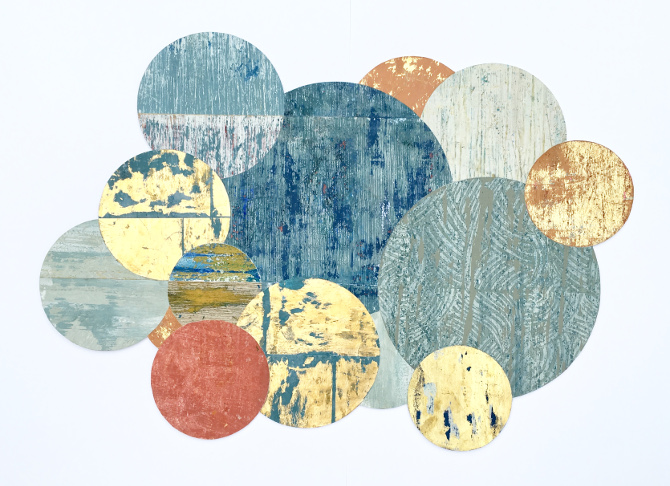 I’m impressed by the beauty of the light Alan captures in his work, and ask how he learnt to represent it so effectively. “Sometimes we need to be shown the light,” he says. “I hope in my work that I’m revealing a little of what may have been hidden.”

The process of developing and completing a work of art can be lengthy and ponderous.
“Often a piece of work will ‘hang around’ for quite some time before finding another paper to marry up with it,” Alan says. “At the onset, I have no preconceived idea of any finished work. The process is just in the doing. I’m thinking about ancient weathered walls, tribal textiles, or a place of cultural interest which has only the decorative architectural features left, with all the precious artefacts removed. Towards completion of the work, I’m striving for depth, hidden meaning, or just something beautifully decorative.” 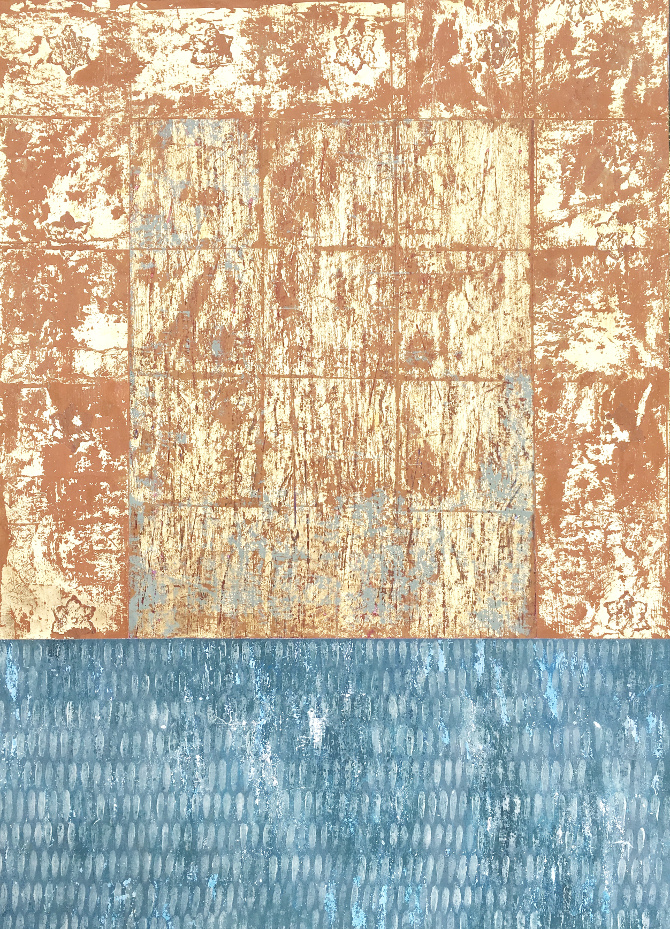 Never Wanting to be Found by Alan James McLeod

Daydreaming is a vital part of Alan’s creative process. “I did a bit of travelling when I was younger, not so much now, so the use of a good imagination helps. Places like Italy and Malta, left an impression on me. The faded colours, layers of history living side by side…”

Alan begins the creation of his painted papers with no fixed plan or vision. “It’s solely about the drive to create an effect or texture that I feel I can use in a finished work,” he says. “How the papers end up influences the direction the piece is going in, be it a more planetary look, abstract landscape, or thinking of imagined shrines, artefacts or architecture. Very rarely is a piece completed using only one paper. I use a combination of techniques, including edge to edge joining for the composition, and collage for the decorative elements.” 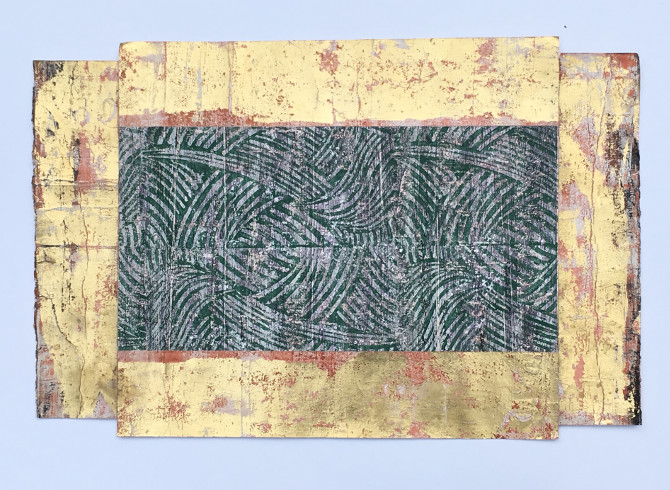 In his bio on the Lime Tree Gallery website, where he frequently exhibits, Alan states his goal of documenting “emotional responses to music and memory, celestial bodies and changes in the seasons.”

He elaborates: “Abstract work can evoke memories of not just places, but feelings and experiences. I add shapes to the compositions to add focus, hoping the viewer finds enough space within the work to add their own interpretation. Anthropomorphising what is seen happens often, but the attaching of memories and the personalising of the piece is the joy of producing the work.”

Things Seen That No Longer Remain by Alan James McLeod