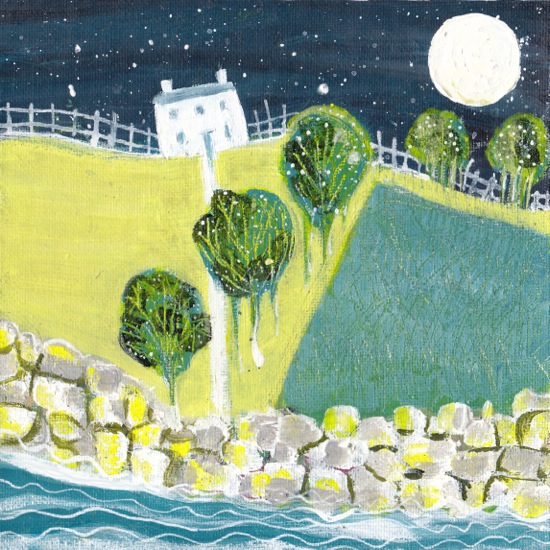 My story Evening Tide has been published in the October issue of Living Quietly magazine. It’s a version of my tale Farewell Gifts, which I shared at Salon Soirées’ mirror-themed evening on Tuesday 11th September. It reveals the crunch moment in a woman’s life, and a fresh start within earshot of the sea.

Here are a few lines from it:

The house sits on the edge of a field, its tiled roof sagging in camaraderie with windows and doors. Sunbeams bounce from the panes as though someone inside has turned on a light.

The lettings agent allows me to spend half an hour exploring.

“Let me just…” I keep saying as I try to imagine how the spaces will feel with only me and the resident spiders to occupy them. Cobwebs glint wherever the sun sneaks in, nestling where beams meet and holding the place together.

“It’s perfectly safe,” the lettings agent says as we emerge.

“I’ll take it,” I respond. My heart flutters as I utter the words, and I grin at the crooked house.

I’m really pleased to have Evening Tide included in the magazine, which describes itself as being for people “who want to tread more gently through life.” How lovely. 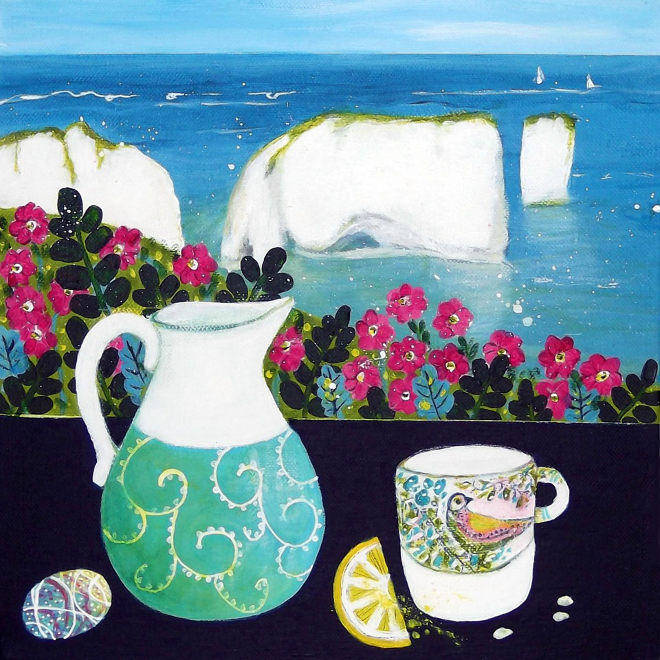 There’s an enticing hint of reminiscence about Gilly Mound’s mixed media artworks – looking at them I find myself recalling childhood holidays to picturesque villages, often within sight of the sea and almost always within earshot of sheep. The vivid colours and bold shapes are deliciously inviting, with an impression of sunshine throughout.

“I have always loved colour,” Gilly comments. “Initially my art was based around mixed media and stitch and was quite colourful, but not as bold. Then a few years ago I decided to pare down the media and processes I was using and began to experiment with acrylics. I was instantly hooked.” 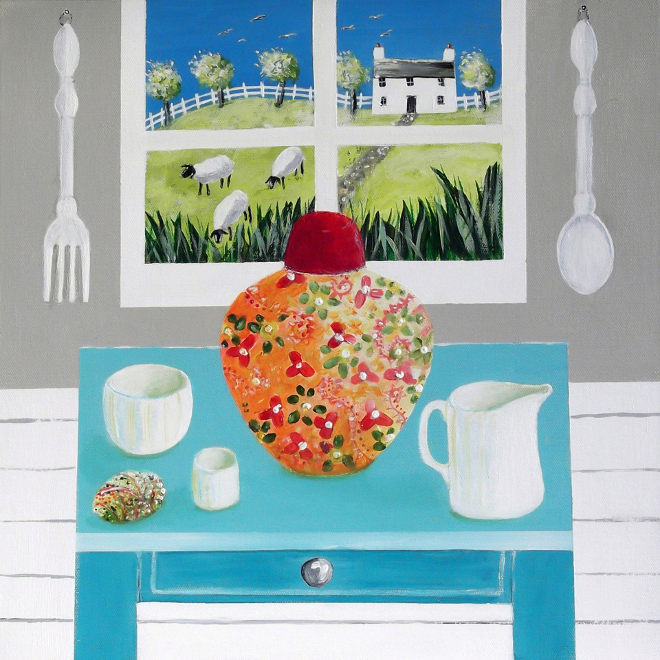 Home From Home by Gilly Mound

Gilly describes her style as “quite ‘blocky’ and naïve. Acrylic is a perfect media for this style.”

Her surroundings are frequently the impetus of a new work of art. “For me it’s down to environment,” Gilly explains. “I live in the countryside where the changing seasons are very defined and inspirational. I love to walk in a rural landscape of fields, trees, leaves and sheep! And the British coastline, particularly Cornwall and Wales is very influential in providing imagery of little boats and harbours.” 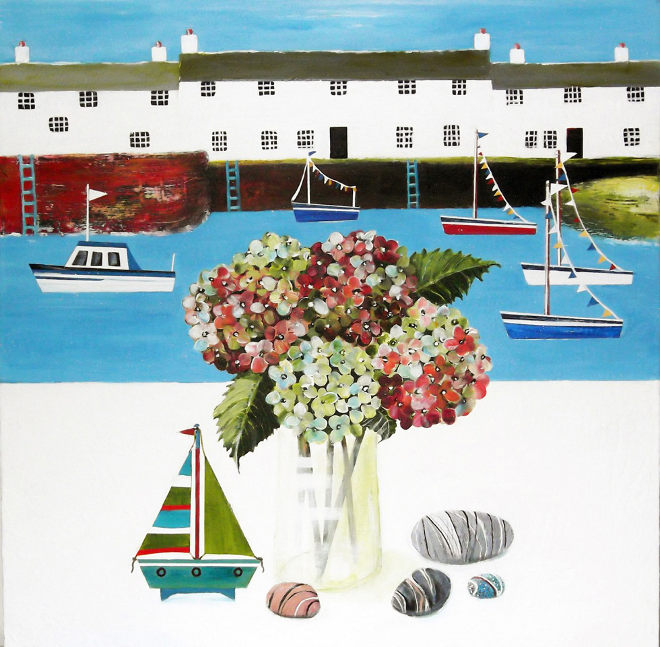 Gilly is also a fan of ceramic pots and jugs, and these, too, appear in many of her works as still life elements, often providing a foreground focus to an idyllic view. I love the details she chooses to include, such as the pebbles in the scene above. 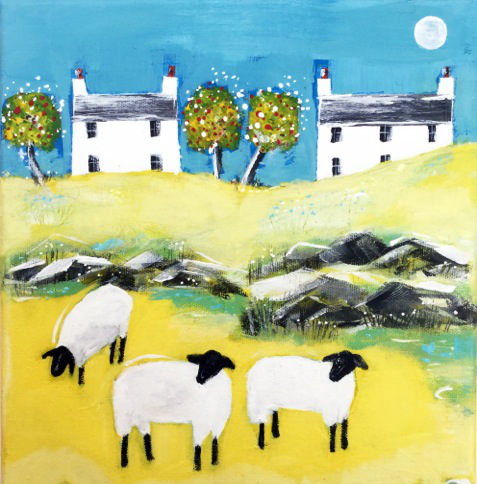 Gilly’s aim is to share her affection for the places she lives close to in Worcestershire’s Teme Valley, and the locations she visits.

“I try to portray the way I feel about places and everyday objects rather than capture their exact visual reality,” she says. “For instance, my painting of Bayards Cove, Dartmouth, is pared down and stylised but still recognisable as the subject.” 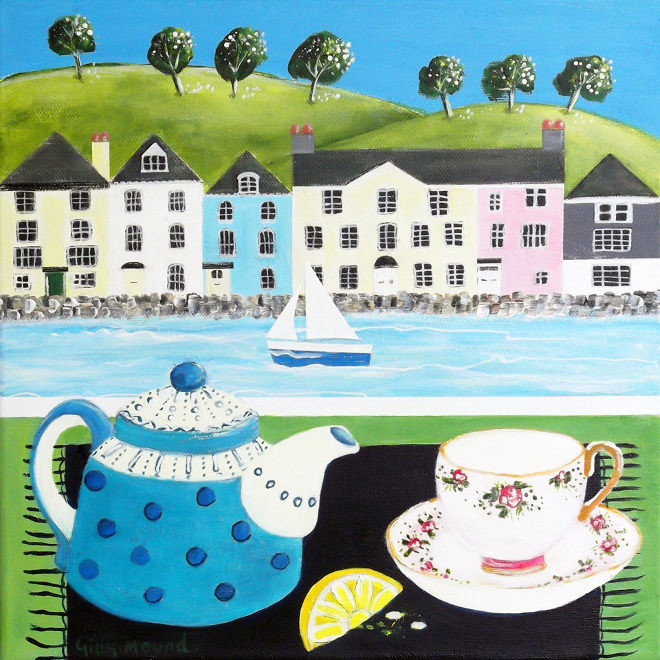 Prior to immersing herself in fine art, Gilly worked as a fabric retailer and knitwear designer, before studying and then teaching fashion and textiles. I couldn’t resist asking how she feels her background in this area impacts on her work.

“A really interesting question!” she exclaims. “I believe it has given a commercial leaning to my work. Colour, shape, pattern and form are important features of fashion and textile design and yes, I believe these ‘organising’ factors do influence me when I am making art.” 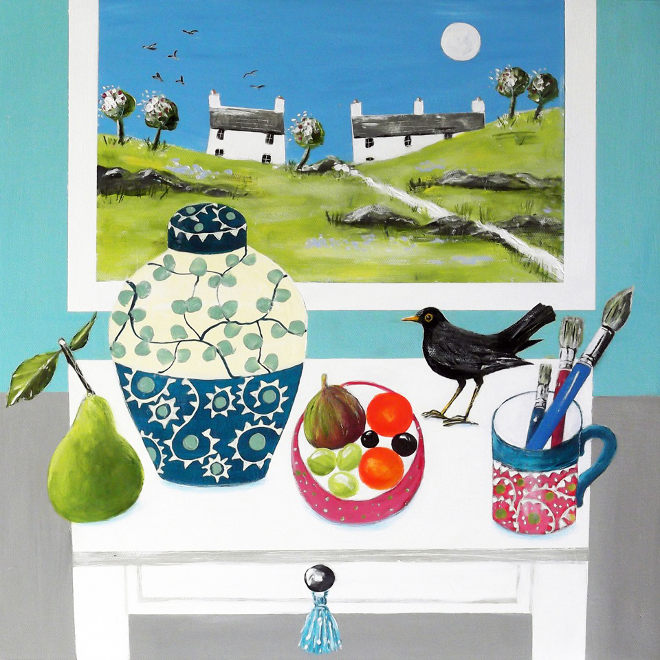 Where I Want To Be by Gilly Mound

The pleasure of creating is evident in her work. “That moment of making art and ‘being in the zone or flow’ is a priceless experience,” she says. “Unfortunately it doesn’t happen every day, but when I’m fully connecting with my work there’s a sense of immense satisfaction in simply being involved in the creative process. I wouldn’t want to do anything else.”