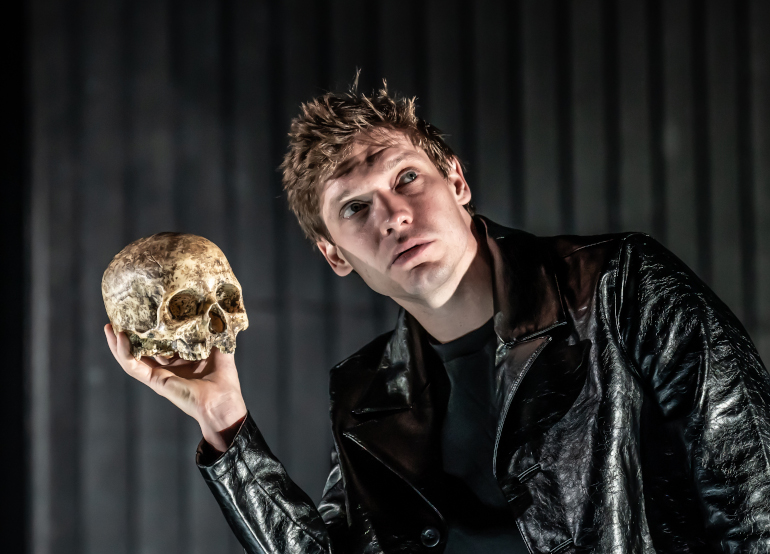 Bristol Old Vic’s departing Artistic Director Tom Morris describes Hamlet as a play about memory. This is true for the characters, struggling to come to terms with the changes that caused by loss – in themselves, loved ones and circumstances. The world itself seems altered. In this filmic, visually rich production, the very set moves – graves appear almost underfoot (Firdous Bamji as the gravedigger is a particular delight) and doors, windows and staircases expose themselves as the character reveal their own complex facets. Set designer Alex Eales took inspiration not only from the Danish town Helsinger, which Shakespeare based Elsinore on, but from MC Escher drawings, and it shows.

The actors make full use of this space, portraying a full gamut of human emotion against the starkly lit, rotating, towering background. 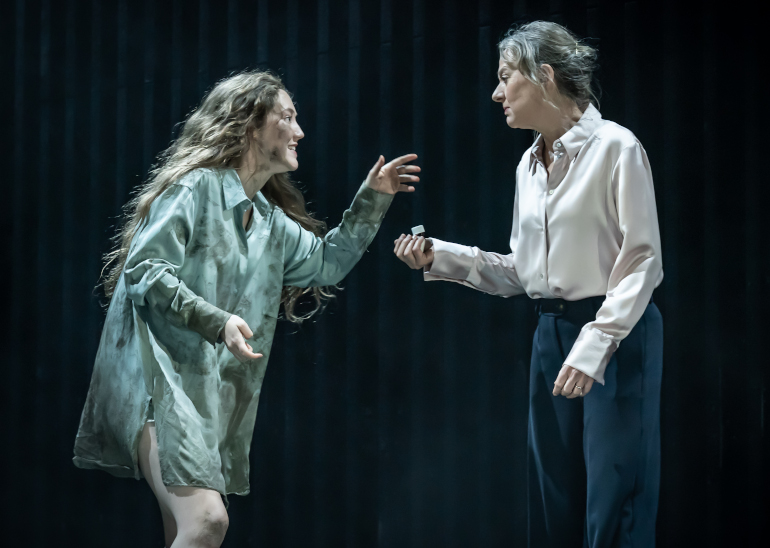 Mirren Mack as Ophelia and Niamh Cusack as Gertrude.

Mirren Mack as Ophelia is initially warm and relatable, making her descent into grief and, in this production, drug addiction, all the more shocking. Niamh Cusack brings layers to the role of Gertrude, adeptly unveiling the character’s inner battles between her desire to protect, defend and chastise her son. In Cusack’s skilled hands, Gertrude is perhaps the most nuanced character – hiding her mourning for her dead husband behind the thrills of her new marriage even as she begins to distrust Claudius (Finbar Lynch in deeply sinister form).

As Hamlet, Billy Howle is impassioned, unhinged and utterly believable, as the actor, perhaps best known for his film and TV roles, gives his heart, body and soul to the role. His energy is mesmerising as he contorts himself in the throes of anger, mischief and anguish, while video designer Jack Phelan’s footage reminds us that this tortured creature was once a happy little boy. 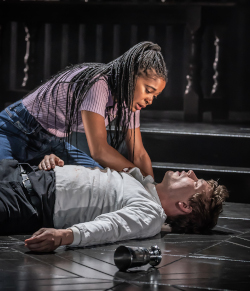 Isabel Adomakoh Young at Horatio with Billy Howle as Hamlet.

On the theme of memory, there’s pleasure to be had throughout from hearing classic lines expertly delivered by all nine actors, and of, as so happens with Shakespearean plays, discovering and re-discovering the root of familiar sayings, from “Get thee to a nunnery” (spoken by Hamlet to Ophelia and far more heartbreaking in context) to the ghost’s line regarding “murder most foul.”

The fight scenes directed by Bret Yount and many deaths are aptly dramatic with plenty of bloodshed, and at the other end of the scale we have parental and filial love, the latter demonstrated elegantly between Hamlet and Horatio (Isabel Adomakoh Young).

This is a production that gleefully toys with all of our senses, including smell, and enthrals throughout.

Have you watched, seen or read anything interesting? I’d love to know. I’m always happy to receive reviews of books, art, theatre and film. To submit or suggest a review, please send an email to judydarley (at) iCloud.com.