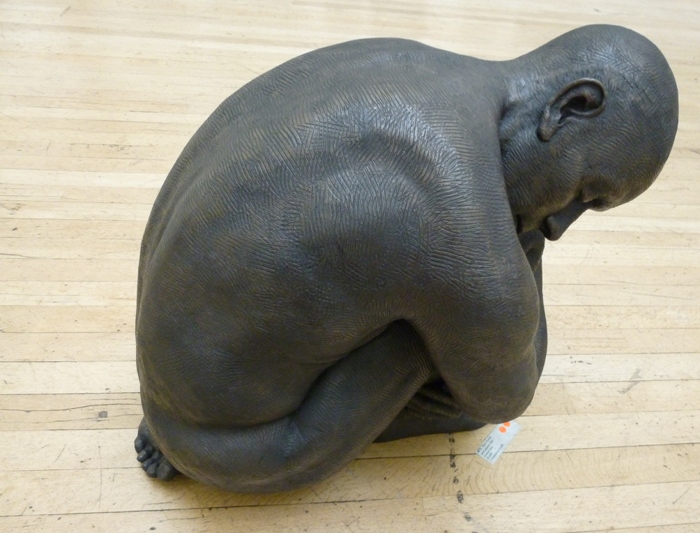 My story ‘Selfcontained‘ has been published by the marvellous Café Irreal. Hurrah! I’ve been sending them my less conventional tales for a while now, so am very happy this one has been chosen to be invited to pull up a seat, order a hot drink and join in the conversation 🙂

The Café Irreal specialise in publishing literary fiction that accepts (and welcomes) the possibility of the impossible and makes it common place. They define the genre here.

My particular story drew inspiration from a wonderful piece of art by Moira Purver, titled Self-Contained Man, which featured in the RWA’s open exhibition. I spent an afternoon there in late 2014, gleaning inspiration and taking notes. I rather fell in love with Moira’s beautiful sculpture. An idea about Self-Contained Man took root, and developed into a story told from the point of view of a sculpture grappling with the question of whether or not he has a sole. You can read it here.

I also had the pleasure of being invited to be a guest on the Steve Yabsley lunchtime show for Radio Bristol last week. The show was billed as being “Author Judy Darley, blossom poems and dormice” so I was in great company, though sadly didn’t get to meet any actual dormice. Steve talked to me about my book Remember Me To The Bees and asked lots of questions about SkyLightRain.com and writing in general, some of which I was able to answer intelligently, others less so. I read out snippets of some tales in the collection too – you can still listen to it here: http://www.bbc.co.uk/programmes/p02gwq1y