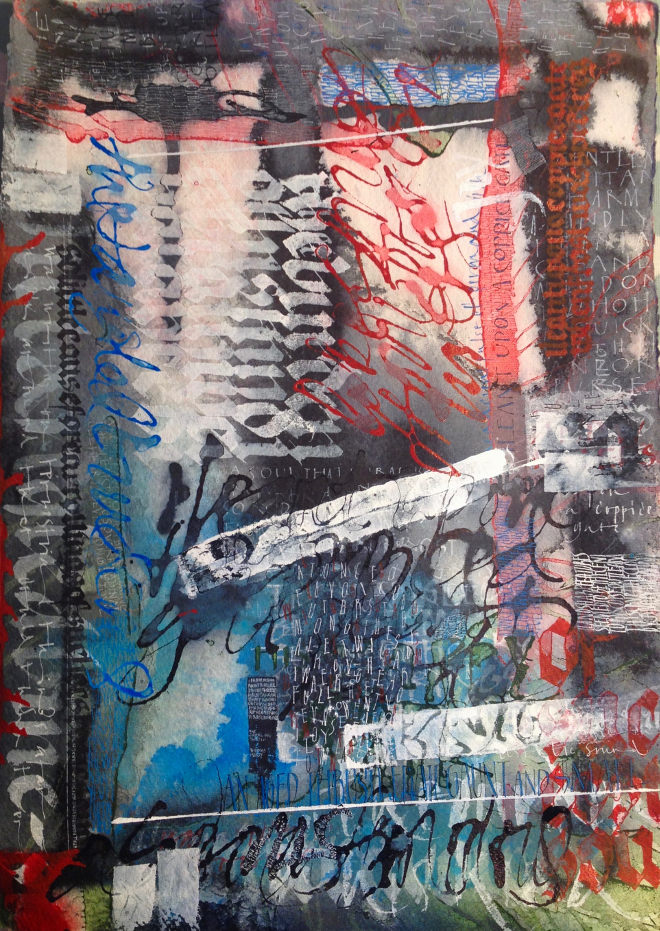 I encountered Simon Sonsino’s beautiful textual art at Art In Action this summer, and was instantly captivated. His use of lettering as a abstract form of patterning is utterly entrancing – it’s the shapes that matter, so that the angle of a serif font, the curl, tilt or crossbar, makes up part of a whole composed of abstract marks and enticing colours.

That isn’t to say the meaning of the words themselves have no weight (the artwork at the top takes its title, The Darkling Thrush, from a Thomas Hardy poem), only that whether or not you can read them is less important than you might expect.

“I came to calligraphy late,” says Simon. “I was 30 before I picked up a dip pen, and although I now have my OU design degree, various certificates and calligraphy diplomas, I feel the richness of learning comes from watching and working with people who inspire me.”

These days, he comments, his calligraphy “tends toward the abstract and most applications of my work are for artistic calligraphy rather than practical lettering.” 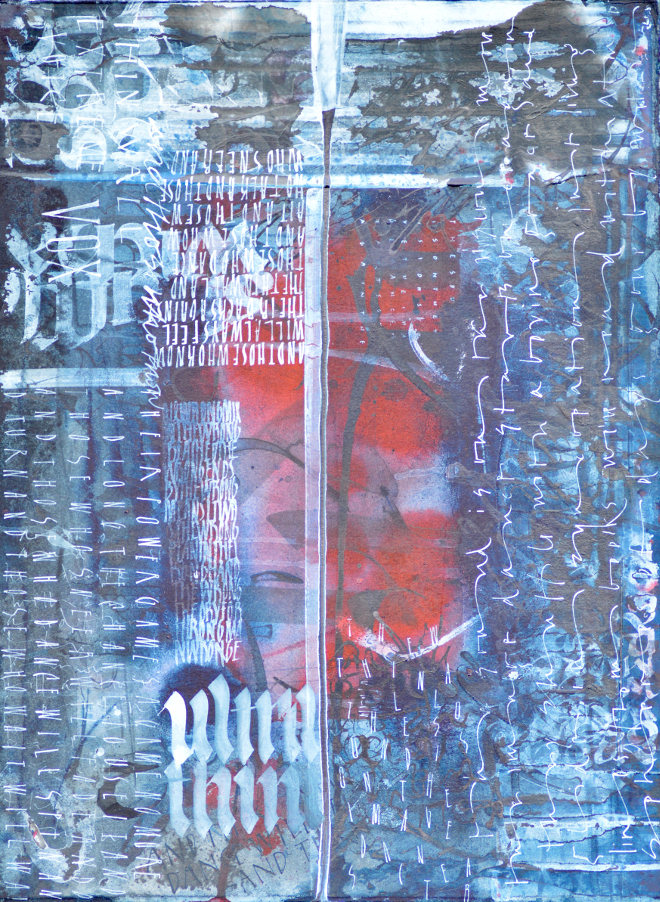 The Thin Wall by Simon Sonsino

Simon’s calligraphic journey began in 1994 when he joined an evening class for beginners with the aim of equipping himself to design stationery for his wedding to his wife Yvonne. “After learning the formal rules and with continued practise, I felt I was ready for more input,” he says. “I joined a calligraphy society, primarily to learn more than the books were giving me (the internet was still in its infancy at this point) but I soon became disillusioned with calligraphy as an art form and, although I appreciate the skills and hard work needed to create calligraphic works, it seemed to me that people were happy to gently nudge the boundaries rather than push them.” 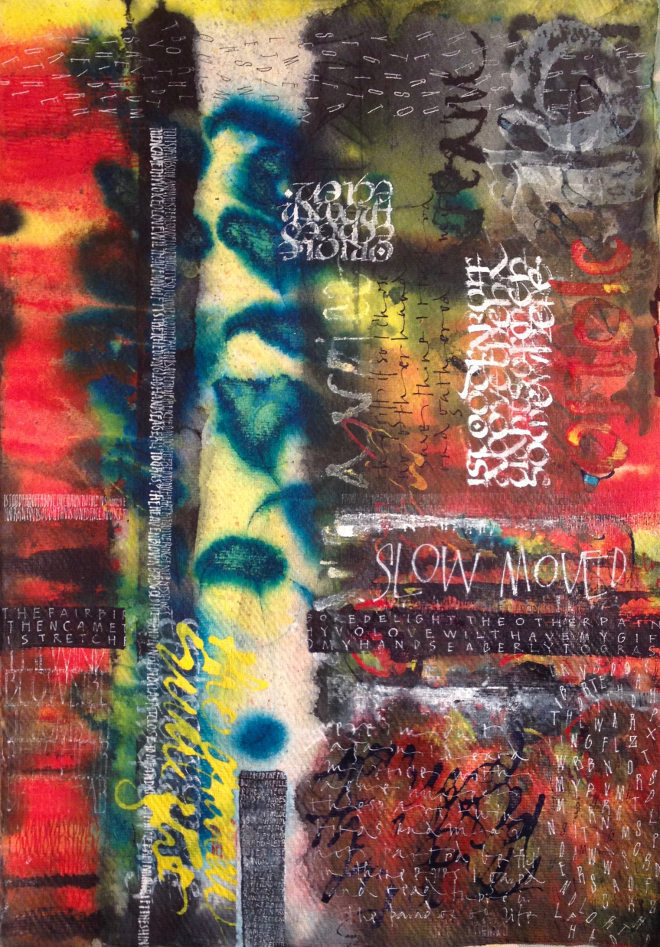 The Golden Oriole by Simon Sonsino

Simon’s view of this was challenged when he attended a workshop with Satwinder Sehmi. “His style and attitude open my eyes and in his book Calligraphy: The Rhythm Of Writing I discovered a world of influences, especially the abstract calligraphic works by Thomas Ingmire. I knew this was the direction I wanted to take my lettering – at last I’d found calligraphers using letterform for its aesthetic rather than just a means to an end.”

It was a moment of awakening for Simon. “Learning how others create their art has been pivotal to my artistic direction and love of letterform; from their techniques and styles I have gleaned elements that have motivated and enhanced my own art and helped my style evolve and grow.”

In Simon’s artwork, the words serve an aesthetic purpose, rather than being the end aim in themselves.

“I believe that it’s acceptable for modern calligraphy to be illegible as a literal message, and so strive to challenge the viewer’s perceptions of calligraphic work,” he says. “My compositions show that words and letters can become abstract images that convey visual cadence, humour, atmosphere and expression. Letterform can evoke feelings in the viewer that verse alone is not always able to.” 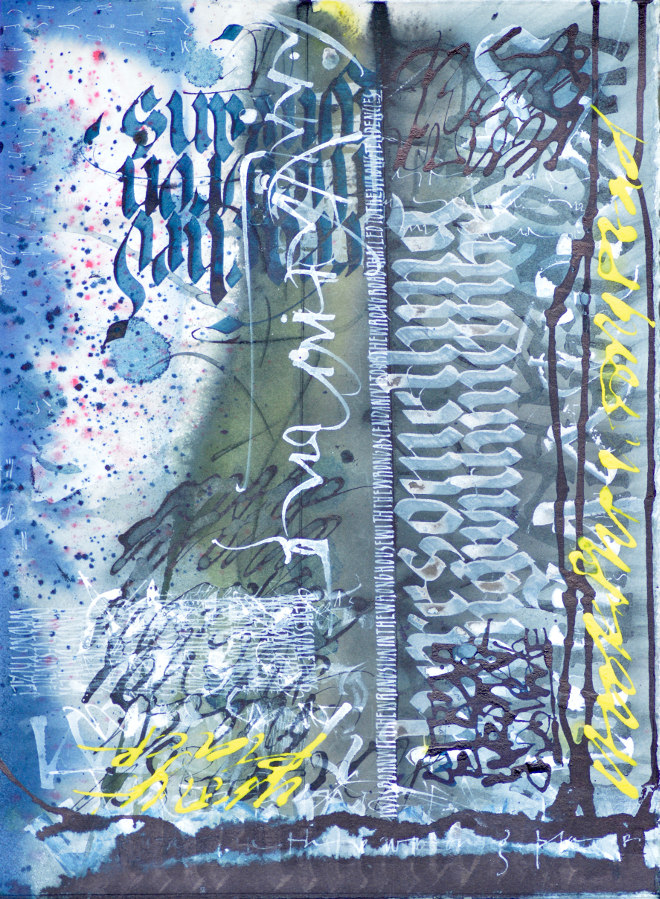 He adds: “I’ve never been solely interested in the well-trodden path of interpretation that preoccupies calligraphy at its most traditional; I prefer my work to imply the emotion and ‘feel’ of the chosen text. In my opinion, any art form need only have two attributes: impact and intrigue – impact to grab the viewer’s attention and intrigue to hold it.”

Sharing techniques and ideas “with other likeminded people at workshops and demonstrations” is among the greatest pleasures for Simon. “For me, the joy comes in the activity,” he says. “Sometimes watching the paint dry is more enjoyable than the final result!”

Simon’s first book Textual Art is already on its 3rd reprint, and he is currently working to complete a DVD in time for Christmas, and starting work on his second book. Find more of his work at the gallery on his website www.simonsonsino.com.