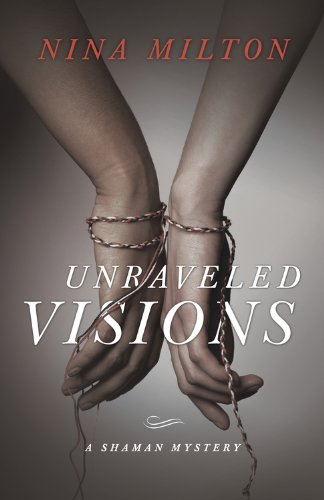 Unraveled Visions (A Shaman Mystery) is the second of The Shaman Mysteries by Nina Milton. This review has been written by Lee Fielding.

We’re back on the rain-drenched moors and the rugged, forbidding coastline of Somerset for the second Shaman Mystery by Nina Milton; Unraveled Visions. One of the many things that draws me to read these books and that keeps me looking out for them, is the brilliantly described landscapes, both of Somerset and of the shamanic otherworld – the place shamans go in when they’re in a trance.

As with number one of the series, In the Moors, which I reviewed for SkyLightRain on its release, I was hooked from the first page, a tense description of the body of an unknown young woman being winched up from her watery grave in a silted gravel pit on the River Parrett.

Like In the Moors, Unraveled Visions is a mystical thriller; a whodunit with supernatural undertones, but it still feels very much of the real world, because shamans are part of the alternative therapy community all over Britain and the US, as well as in traditional communities.