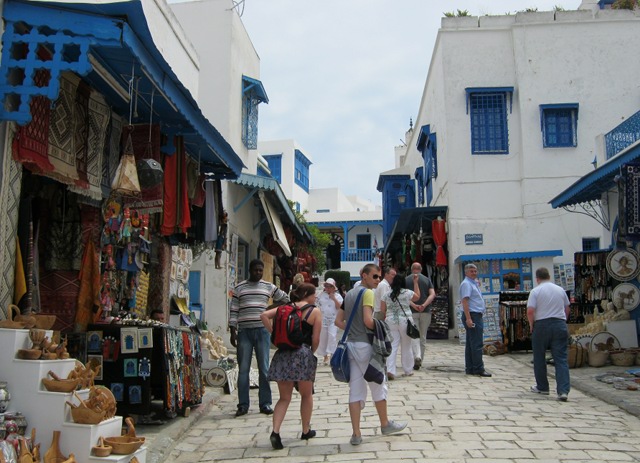 In May 2011 I visited Tunisia and found a country still reeling from its revolution.

It’s a complex place, Tunisia – a country where the locals describe themselves as Mediterranean, yet the main religion is Muslim, and as many farmers keep camels as sheep. Tourism has overtaken agriculture as the main earner in recent years, transforming many coastal areas, particularly those in popular Hammamet, into spa and bar hotspots that could almost be anywhere on the Med, if it wasn’t for the elegant curling Tunisian script adorning street signs and shop fronts.

Tourism is often accused of diluting local flavour, but in the case of Hammamet, the dearth of visitors following the 2011 revolution may have helped restore it, to an extent. There’s enough exotic flavour here to bring to mind the stories of the Arabian Nights, with restaurants serving up meals while belly dancers perform like flocks of chiming butterflies.

Tunisia’s revolution was sparked (literally and tragically) by street trader, Mohamed Bouaziz, who set himself on fire in protest about police harassment. Outrage swiftly spread, and on January 16th President Zine al-Abidine Ben Ali was forced flee the country, leaving it to reform itself as a democracy.

Yet these recent happenings are far from the topic of the moment – ask anyone about it and they’ll simply say they’re happy to be free, then try to distract you with tales of the delights you can enjoy during your visit.

I’m visiting Tunisia as part of an entourage that had its own exotic elements. One of thirty journalists invited to attend, I was initially disconcerted to discover that our group made up a total of 103 attendees, then charmed to discover the variety of people on the trip, from hoteliers and travel agents to a golf trick specialist (apparently that really is a career choice!), plus numerous dignitaries including a throneless Yugoslavian princess.

The aim, as far as any of us could tell, is to spread the word that Tunisia is well and truly open for business again, following its move from dictatorship to democracy.

We arrive in darkness and drove for an hour and a half trying to catch glimpses of this enticing country, before reaching the golden splendour of the Hasdrubal Thalassa & Spa Hammamet at Yasmine Hammamet, a area’s newest resort. 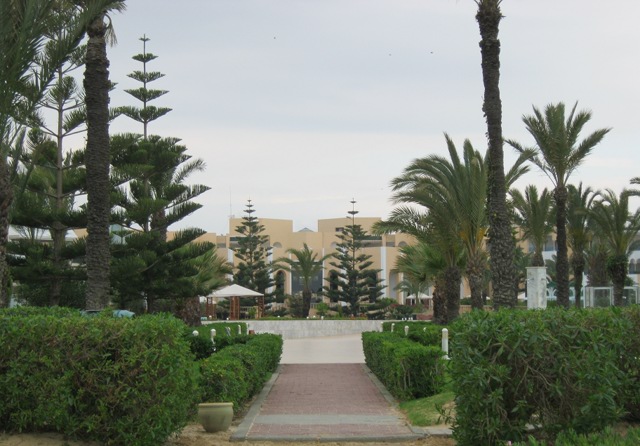 With a foyer that fairly glistens with chandeliers, this is very much a hotel for celebs and their entourages. Even the most basic rooms, the junior suites, have living rooms, spacious balconies, and rose petals covering every surface. I’m particularly enamoured to discover guides in my suite to the hotel’s extensive art collection, which includes dreamy geometrical abstractions by Mostari Chakroun and Abdelaziz Gorgi’s intriguing figures, a great touch that feed my imagination each time I stroll down a hotel corridor.

Views of the Atlas Mountains

With more than 100 people to impress, our guides must be rattling with nerves when we wake on our first Tunisian morning to discover the sky grey with rain-heavy clouds. Riding in tourist trolleys, we zip down the coast to Central Hammamet. This area has been popular with tourists since the Romans arrived in 2AD and named it after the Hamman baths they established there.

Hammanet fort stands overlooking the Mediterranean and the Atlas Mountains beyond, providing an exquisite background against which the life of the medina unfolds. There’s a lovely café at the top where you can sit with a notepad and pen for as long as you like in exchange for the price of a cup of coffee or fresh-squeezed orange juice – well worth the few dinars it will cost you.

With so few tourists venturing here in months, the shore is pristine and dotted only with fishing boats. Our guides assure us that usually it would be packed with sunbathing tourists, but without their toasting bodies I have a pleasing sense of how it must have looked to 19th century and early 20th century fans of the area, such as Swiss artist Paul Klee and French writers Georges Bernanos and Andre Gide.

More recent fans have included Paul McCartney, who wrote Another Girl, part of the soundtrack to The Beatles’ movie Help!, while holidaying here, but you’ll find plenty to inspire your own creativity. Whether you venture into the architecturally superb Villa Sebastian, now the Hammamet International Cultural Centre, or into a nearby medina, where traders will try to entice you with calls of “Very cheap, Asda price!”, the contrasting ideologies offer up a wealth of possibilities.

The following morning the sun returns and we head to Monastir to visit the Ribat of Harthema, which served, among other things, as the setting of the films Jesus of Nazareth and Monty Python cult classic The Life Of Brian (”He’s not the Messiah – he’s a very naughty boy!” – comic writing at its finest!).

Today the Ribat retains much of its elegance and the tower is well worth the climb for the view over the surrounding area. At first glance I think I’m looking down on a village of white houses, then realise that what I’d mistaken for buildings were the marble headstones of the adjoining Muslim cemetery.

The 8th century fort is extraordinarily atmospheric, with house martins skimming through the air and nesting in the pocked walls, while sweeping views over the ocean remind me of the marauders it was designed to protect the Islamic empire from. In the fort itself there are numerous walkways to explore, so that even with 102 other people in the vicinity I occasionally manage to find myself alone. 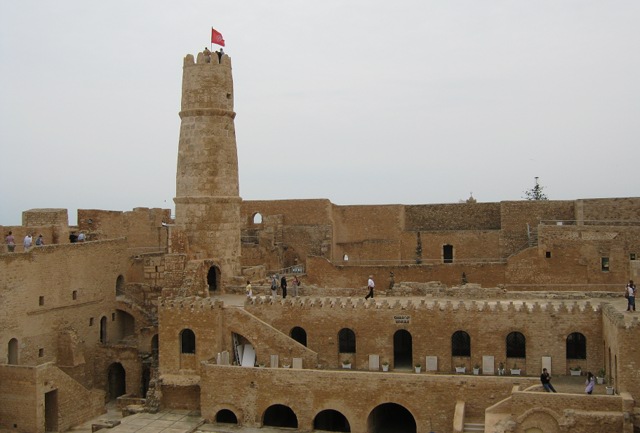 There’s something oddly timeless about it, perhaps partly because it has been added to over the centuries, with occasional pillars salvaged from Roman ruins, but also because many of the corridors serve as impromptu bike sheds, with modern bicycles propped against ancient stones.

In a way it seems to sum up the spirit of Tunisia, a country where layers of opposing beliefs and cultures intermingle, and the reality you are presented with often hides a far more intriguing truth.

A short stroll away from the Ribat, we reached the resting place of Habib Bourguiba, the founding father of modern Tunisia and the country’s first president after he led the fight for independence from the French, finally succeeding in 1956.

I’m inspired to learn that this was the man responsible for bringing equality to Tunisia, abolishing many Muslim laws and emancipating women. His mausoleum is as grand as a palace, with domes, columns, tiled archways and two soaring minarets inscribed with poetry written about the great man. 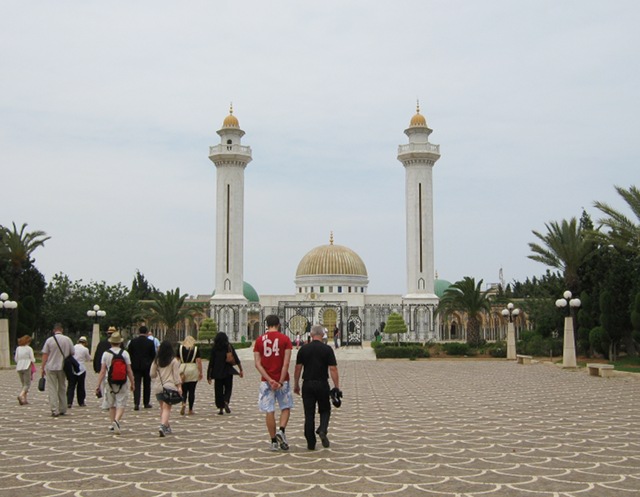 Inside, chandeliers reflect the marble, brass and silver adornments, while a small exhibition tells the story of his life, alongside photographs showing him resembling a rather suave member of Sinatra’s Rat Pack.

That night we attend a gala dinner, feasting on sweet calamari, crabmeat, salad and veal as bellydancers perform ritualistic storytelling dances as part of the 1001 Nights show, harking back to the country’s Arabic heritage once again.

Arriving back at the hotel after midnight, there’s one last view I want to take in before we leave early the next morning. Sidestepping the beautiful snails that have emerged following the previous day’s rainfall, I make my way past the hotel’s abundant water features, often hearing the fall of fountains long before I reach them.

With no one around and little light to see by, I have the sense of being utterly alone. Then another sound reached my ears – the soft sigh and suck of surf. The path led right to the beach, floodlit and glorious beneath the night sky, and beyond it the sea. 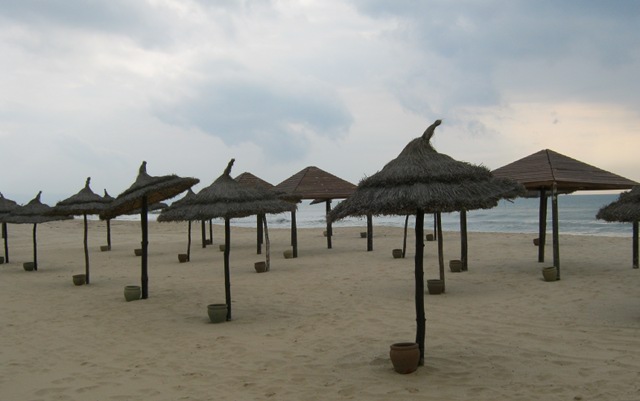 Sitting on the edge of the sand, surrounded by palm-fronded parasols I can imagine what this resort will be like once people regain their confidence in Tunisia’s newfound peace, and begin to return in droves. And I know I’m very fortunate to experience it right now, when it’s still possible to sit on a Hammanet beach and be the only person there.

For more on what Tunisia has to offer, visit www.cometotunisia.co.uk