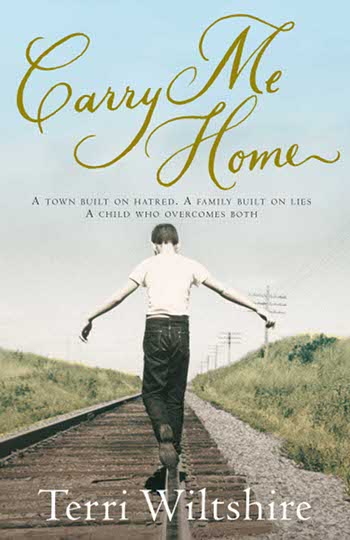 Beginning rather shockingly with a case of mistaken identity that leads to a 1904 Alabama lynching, Carry Me Home crosses generations to bring us the story of Canaan and her great-uncle Luke.

Canaan is returning home to Lander, Alabama, nursing a body full of bruises and a heart full of disappointment and mistrust. After spending her childhood plotting  escape from the small country town, she’s been forced retreat to her grandmother, Lou Venie, and try to reclaim some semblance of a life among the gossipers and gripers she’d been so glad to leave behind.

Luke’s story is far more brutal, having spent his own childhood being ignored, beaten and left tied to trees for days on end as punishment for ruining his mother’s life simply by being the product of a union she claimed was forced by a black man, resulting in the violence of the first chapter.

As grim as this all sounds, there’s a warmth to Terri Wiltshire’s writing that brings her characters to life and prevents this becoming a fictionalised misery memoir. Even during his worst experiences, Luke shines through – humble but hopeful and wonderfully stubborn when it comes to living life in his own unconventional way. His early years present a vivid look at the sub-culture of 1920s hobos in the American Deep South – as exotic and curious as a hidden tribe leaving messages for each other “carved into wooden trestles, on fences , and along the tracks; a secret code that ordinary people, bound by the restraints of what hobos referred to disdainfully as a ‘settled life’, passed by without noticing.”

Canaan has a far feistier personality, but the strength is the same. As she fights the expectations and pre-conceptions of those around her, she discovers that of all the people she battles against, the greatest foe is herself.

It’s also illuminating to catch glimpses of characters such as Lou Venie as children and discover the experiences that shaped them as adults. Each of the characters love and learn in equal measure, and as a reader I found myself loving and learning in turn.

Terri Wiltshire captures the era of her novel and its setting with a clarity that makes me feel I’ve been there, riding the railtracks along with Luke and always with half an eye out for somewhere to settle down.

Carry Me Home by Terry Wiltshire is published by Macmillan New Writing and is available to buy from Amazon.