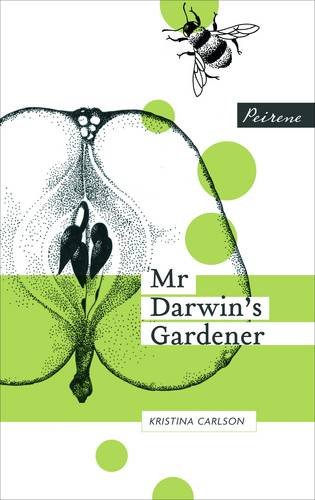 Writing the first paragraph of a novel is an artform in itself. At the very least it must intrigue the reader sufficiently to make them hunger for the remainder of the story, while setting the tone for the pages that follow.

Mr Darwin’s Gardener achieves this with unwavering audacity, opening with the sentence: ‘Edwin lopes along the road, picking his nose’, before spilling into the degenerate mockery of the jackdaws surveying the scene.

It’s an unconventional start that makes what follows – a drifting narrative that alights in the minds and thoughts of the residents of the Kent village of Downe – easier than you might expect to absorb and devour.Portraying the mindset of rural, conformist 19th century England, the novel is at heart an examination of religious believe versus scientific reckoning at a time when this was hugely controversial. Yet the scope is also wide enough to offer up the minutiae of everyday life, as Finnish author Kristina imbues her pages with a miscellany of ponderings that group together to create a crisply distinct portrait of family life, marital and professional disappointments, and grief in its rawest, most abject form.

Thomas Davies, the gardener of the title (and yes, it is Charles Darwin that he is gardening for), is a father of two who lost his wife Gwyn three years before the novel opens, and the first pages present us with the village residents observing him walking past as they prepare for a church service he will not attend.

The meandering POV is masterfully deployed, flitting through the village’s various bird communities, and resting in the collective consciousness of the little church’s congregation, before scattering to become as individual and clear as the characters created by Kristina.

As random as it at first appears, there is an extraordinary deftness in the numerous voices and musings, as they gradually coalesce to express the personalities and preoccupations of Thomas’s neighbours. Of them all, Thomas gives up the most poetic thoughts, with lines like “Mr Darwin is a tree that spreads light” and “If there is no soul, then there is only a body, one you have to carry yourself.”

Throughout the novel, Kristina, and the novel’s translators, mother and daughter team Emily and Fleur Jeremiah, dapple the pages with lines that are both poetic and prosaic, and which always rings out with recognisable truth. Open the book at random at random and you’ll have a wealth to choose from:

“My ears grew large from listening to the silence.”

“Tears are sown in vain; nothing will grow from them.”

With lines like these, it’s no wonder that the novel resonates with a power more commonly found in the short story form, taut with the villagers’ discomforts and suspicions over this grief-stricken, God-rejecting man, to the point that they come to believe him capable of an act that has them racing through snow and fading light. This novel is a testament not only to love, grief and community, but to the frailties of the human spirit that can lead to mob mentality in an instant.

Mr Darwin’s Gardener by Kristina Carlson is published by Peirene Press and is available to buy from Amazon.