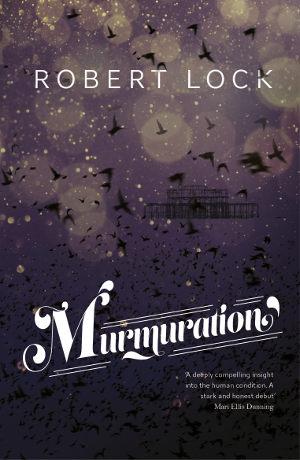 Drawing us into the magic and squalor of a seaside town, Murmuration by Robert Lock is that rare thing, a novel strung from several stories, each of which contributes to the greater whole.

In this sense, the opening imagery of a flock of starlings performing their nightly show mirrors the nature of this unusual narrative. Rippled through the the starlings’ calls as they execute their extraordinary dance, “as perfectly orchestrated and paced as the finest symphony”, our omniscient view through their eyes takes in several centuries and lives – each disparate and yet mysteriously connected.

Discovering how our protagonists link together presents a quest-like element, as each story immerses us in the concerns of a single, stand-alone character. From the dizzying success and tragic losses of 19th century “music hall clown” Georgie Parr, to Michael ‘Mickey’ Braithwaite battling his “difficulties” to volunteer in World War II’s Observer Corps, to sceptical, shrewd, pier fortune-teller Bella Kaminska in 1965, to truth-seeking 1980s archivist Colin Draper, to, almost bringing us a full circle, modern day comedian Sammy Samuels.

Each is captured with infinite compassion, so that their private melancholies, even acerbic Sammy Samuels’ can’t help but move you. Robert Lock has equipped dos characters with voices that fit them exactly (better than their clothes, in most cases), so that slipping from one century or decade to another deposits you so firmly in the next life as observed by the starlings that you’ll be absorbed at once.

The starlings have their role to play too, in some cases merely shuffling along the pier’s theatre roof, and at other times subtly changing the course of history. The beauty of their murmuration never ceases to amaze, and only hints at their otherworldliness. As sweet, soulful Mickey, the true hero of the novel, says, when he watches the murmuration, it’s as though everything disappears, “apart from the starlings. It was like I was flying with them and it made me want to cry.”

The greatest characters of all are time and tide, sweeping through the unnamed coastal town with both indifference and idle mischief: “‘What’s happening to me?’ he (Sammy) asked silently once more, but the moon beamed down and remained silent, for it spoke only through the tide, which was diligently binding a dead seagull in discarded netting and would not be distracted from its task.”

The town and its pier are like a place of limbo, set somewhere between life and death where only some are lucky enough to escape and spread the myths of its hyperreality..

“And even when the coaches and trains carried them back to their more prosaic worlds the resort lived on in memories and blurry photographs, a special place attached by only the most delicate of threads to the dimmer land of work and tribulation. The resort placed an implicit trust in its visitors’ ability to locate it beyond the quotidian, never doubting their competency, for they had to believe that somewhere there was a brighter sun, a clearer sky, a warmer wind.”

And yet even Sammy Samuels, with his chapters set in ‘Today’, feels like a character dragging his feet through an already obsolete yesterday. The pier is out of time, and perhaps out of magic too.

Lock has conjured up a fascinating jigsaw puzzle of a debut, full of the shifting sands, scents and sounds of the British seaside, and of human spirit.

Murmuration by Robert Lock is published by Legend Press and available to buy from Amazon.