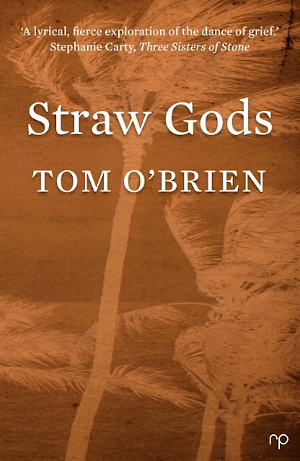 Set in a coastal village and on the surrounding seas, Tom O’Brien’s intensely told novella-in-flash examines the insularity and isolation of grief.

Our narrator is Rosa, living on the shore of the sea that swallowed her husband Matteo ten years ago. With the sound of waves endlessly within earshot, she can’t move on from the hope that Matteo will re-emerge with the next tide.

It opens with a powerful declaration: ‘“I know that you’re dead,” I said to my husband. He didn’t respond.’

Rituals bring scant comfort – the making of tea for a wraith who can never drink it, the poring over of treasures he gave her as tokens of their love – each repeated as if Rosa can lull nature into letting what it has taken slip back to where it, or rather he, belongs.

Rosa confides: ‘There was no storm when he drowned. A freak wave hit the boat, they told me, caused by something far away.’ The details of this sentence are intriguing – the idea of something so seemingly inconsequentially distant could cause such devastation in the centre of a woman’s life ripples through every story that makes up the novella.

At the far end of the beach a different kind of ritual takes place – this one not to draw someone home but to keep them there, safe and sound: “If the tide comes in, if the waves go higher than my knee,” Ceecee continued, singsonging the words.’

This nine-year-old is Rosa’s niece, answering to her mother’s nightbird call that used to unite two sisters who no longer speak to each other. It builds into a story that feels layered with myths and fairytales, along with elegies written in salt on stone.

O’Brien excels at crafting sentences that offer comfort with unembellished honesty: “The sea needs no one but accepts anyone’ and ‘Grief is ever new.’

In ‘Shadow-Boxing’, the sixth flash fiction, we meet Sol, the youthful light to Rosa’s grieving shadow, dancing along the beach ‘as thunder lumbered to shore’ while his friend Illy offers a cheery commentary: ‘“The Kid is giving as good as he gets.”’

In ‘No Horizon’, O’Brien possesses the page with line after breath-stealing line: ‘The sea had teeth. The thudding rain against the wood drew splinters.’

O’Brien employs the same poetic skill in ‘Where My Life ended, Again,’ describing a burning house: ‘Timber warped and screeched as it twisted out of shape.’

In the same story, Rosa counts her losses just as she once hoarded her treasures: ‘He gave me a pearl one radiant day, and my life as a daughter ended. A wave took him, and I was no longer a wife. I cried too exuberantly for him, and I had no sister. Lightening hit my house, and I was no aunt.’

When Sol’s bravado leads to tragedy, he turns to Rosa, who he knows as ‘the widow’, and begs her for the impossible help he believes she can give.

And in that instant, Sol gets what he needs from Rosa, though not what he asked for.

Amid the raw, searing distress O’Brien conjures, each new story brings fresh delights, stacked high with exquisite lines that hum with loss and tenderness. A leaf folded into new forms, a laugh that lingers in trees, a straw doll woven by a child to keep her aunt safe – each emblematic of the fragility of our bodies cradled against the potency of love.