Claire Trévien is adept at gloriously unexpected turns of phrase. Signs of early life include “collapsed/ arks, kicked in the groin.” History has been shoaled and mouths “left unzipped.”

Reading the poems of her latest collection, Astéronymes, published by Penned in the Margins, makes me feel we’re embedded both in modernity and in the past. At one point she mentions: “There’s a spectator in my boot”, bringing to mind contemporary paranoia and the more innocent species of bug in one neat line. 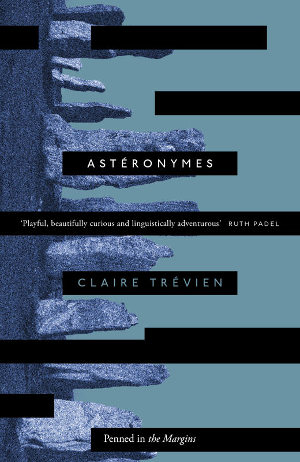 More obliquely, she comments: “The grass here is the kind of green/ that can only exist after rain/ or a monitor failure.”

The collection title works beautifully with the dense and varied contents, referring to the asterisks used to hide a name, or disguise a password.

There is a sense of Trévien playing games, not only with words or sentence structures, but with our expectations, as in Azahara [edit] and The Museum of Author Corrections. In the latter of these, we’re presented both with a poem and a response to it, which is at least in part critical. It’s disconcerting and amusing, as well as giving the illusion of insight into the poet’s process.

A series of Museum have taken up residence on the pages, offering glimpses into ponderings on sleep (including a magical line in which “selkies bump against the hull”, waiting, shared meals and more, reminding us that every element of human life is worthy of examination.

Other games riddle the pages, as Trévien utilises a technique whereby words are split to bookend lines. She states in her notes at the end of the collection: “The most extreme version of this is probably ‘Goatfell’ in the Arran Sequence where the mountain has been cut in four as ‘Go/at/fe/ll’.”

Elsewhere, the observed nestles against the invented, with a mythical submerged town relayed with as much care as a real island.

Much of Trévien’s poetry takes the form of descriptive lists crammed with delicious juxtapositions – where “fern tentacles/ steer through bricks” and “the gaudy sky/ is parenting/ glue-tipped tinsel”. Others of these contain lines pilfered from the books being read by Trévien’s travel companions – harvested then dried and sorted before being discarded or laid out on the page with new words to add the poet’s unique slant.

It’s easy to get lost, pleasantly so, in the delights of Trévien’s skilful word-play, but beyond this linguistic nimbling, the poems speak for themselves – connecting to something less cerebral and far more immediate. There is a richness of impressions to be relished here, as in A Brick Remembers, a series of exquisite non-rhymed couplets that bleed into one another and include a satisfying image of “how each recess in the city/ smirked rainbows”.

For me, Trévien’s greatest talent, as initially discovered in The Shipwrecked House, is her ability to take the ordinary and make me savour it anew, with an appetite fuelled further with each sequence of words chosen with painstaking care and instinctual precision. Breathtaking.

Astéronymes by Claire Trévien is published by Penned in the Margins and is available to buy from Amazon.