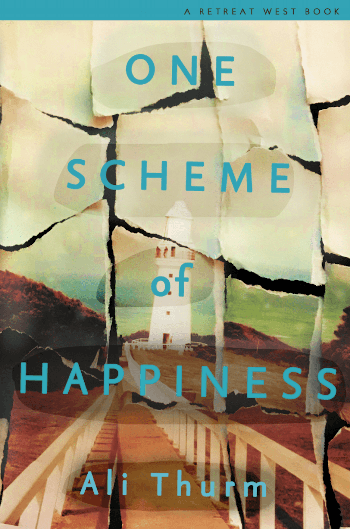 A deliciously discomforting read that will creep under your skin.

Set against a vividly realised setting of a small Northern town in the shadow of a defunct lighthouse, author Ali Thurm paints a journey into obsession and manipulation with steadily building menace. The title is drawn from Jane Austen’s Mansfield Park, and Helen, Thurm’s narrator, regards Fanny Price as her role model. They are both quiet and easily overlooked. Helen hopes to share in Fanny’s happy ending, and is prepared to do whatever she can to achieve that.

Helen has been living with and caring for her ailing mother for twenty years, and has become a little set in her ways. When her mum passes away, it feels like the start of something, but at first it isn’t clear what. A friend of her mum’s suggests a trip abroad, “now that you’ve got some money”, but Helen isn’t ready for the unknown. “Why would I give up the comforts of home to wait around in airports and be ruled by timetables? (…) I don’t want anything to change. This is where I want to be.”

It takes the return of two old school friends to help her realise that this is only partly true. Through the fog of grief and coping strategies, Helen’s former bestie Vicky emerges, with her husband Sam, who Helen adored at school, coming home for reasons unspecified until the novel’s end.

Despite a long-held grudge still bubbling below the surface, Helen accepts invitations to Sunday lunches and evening barbecues, until she’s infiltrated the family. The scenes with her caring for the couple’s children, Holly and Tom, reveal a softer side of Helen. Yet her emotions regarding Vicky and Sam are more complicated. Desire and disgust coil together within Holly, like a two-headed snake.

When Vicky suggests she join them on their summer holiday in Italy, she decides to politely decline, and then accepts.

Bathed in Italian sunshine, Sam’s irritating little quirks soon warm into cute foibles, and Helen begins integrating herself into her friends’ relationship a little too deeply for comfort.

These little detours and deviations feel very human, and help to make Helen not only an utterly believable character, but a delightfully unreliable narrator.

Helen is far from straightforward as a character, at times evoking sympathy, at others’ far darker emotions. Likewise, her relationship with Vicky is satisfyingly complex, both in their reunion as adults and in the flashbacks of their childhoods, where it’s unclear who is the instigator of their forays into bullying.

In the present, Helen gazes at a dozing Vicky. “A narrow shaft of sunlight fell on her tangled hair. She was sleeping like a princess in a fairy story and for an absurd section I saw myself as both the evil godmother (…) and, unexpectedly, the prince come to save her.”

And even as Helen plots to claim her happy ending, she can’t hide her scorn for Sam, describing his choice to buy his wife red roses as “his flair for self-conscious cliché.”

Indeed, Sam remains a bit-player in this story, conveniently providing both obstacle and goal while the real drama unfolds off centre stage between Vicky and Helen. Female friendship, and all its passions, jealousies, possessiveness and unspoken cruelties, squirm as the edges of every scene, reminding us that every act may have an underlying motive not yet recognised even by its perpetrator.

With undertones of The Girl on the Train by Paula Hawkins, One Scheme of Happiness is a powerfully unsettling debut that marks Ali Thurm as an author to watch.

One Scheme of Happiness by Ali Thurm is published by Retreat West Books.