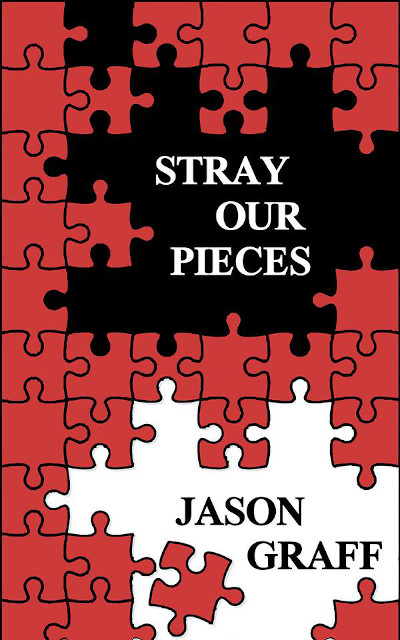 Leo Tolstoy opens his novel Anna Karenina with the legendary lines: “Happy families are all alike; every unhappy family is unhappy in its own way.”

In Stray Our Pieces you’ll discover one of the most authentic representations of the latter – an ordinary family scraping by, with little to bind them together other than inertia.

At the centre of this apathy you’ll find the family matriarch, Gloria, a woman who drifted into marriage and would love to drift back out, if only she could dredge up the energy that would require. Author Jason Graff has created an anti-heroine whose howling discontent reminds us never to grow complacent. Whether you warm to her or (more likely) not, there’s no doubting that she’ll get under your skin.

Gloria grew up with a strong idea about who she would be as an adult. When that plan got derailed in her early twenties, she honed the full force of her ambition into a seething exasperation with the life she’s found herself mired in. This includes her son David, at times gloriously full of promise, and at others, in Gloria’s eyes, achingly disappointing. He, too, has failed to meet her expectations.

It’s a bleak synopsis, but one full of pinpricks of light. Gloria’s acerbic viewpoint is curiously refreshing, and her acute observations often laugh-out-loud funny. She made me wonder who among my own friendship circle has this kind of wit and rage entwined at their core.

Between bouts of irritation with David, Gloria’s love for her son leaps off the page. Early on, a touching scene unfolds between young David and Gloria.

‘“It’s the unexpected things about you that make me happy,” he said, sounding certain that he knew it would make me laugh.’

His insightfulness in this moment warms Gloria, whose unpredictability makes her both alarming and fun to read. Her frustration feels wholly real and believable.

Husband Daryl is the least deeply explored character, which feels natural given that we are seeing through Gloria’s disinterested eyes. As an artist who never got to test the extent of his talent due to family commitments, it seems he and Gloria have more in common in their thwarted aspirations than she’s ever bothered to discover.

My favourite character is Sarah, an eighteen-year-old with special needs who spends her time cycling round the family’s neighbourhood. Her sweet nature is skilfully understated, demonstrated in her repeating refrain: “There you are.” As much as she annoys Gloria, Sarah’s giving her exactly what she craves – acknowledgement of being seen.

In the interview below, author Jason Graff describes Stray Our Pieces as a coming of age story, and I think this is true, but rather than David being the one growing up, it’s Gloria who finally finds a way into the world beyond the family she feels so stifled by.

Stray Our Pieces by Jason Graff is published by Waldorf Publishing and available to buy  here.