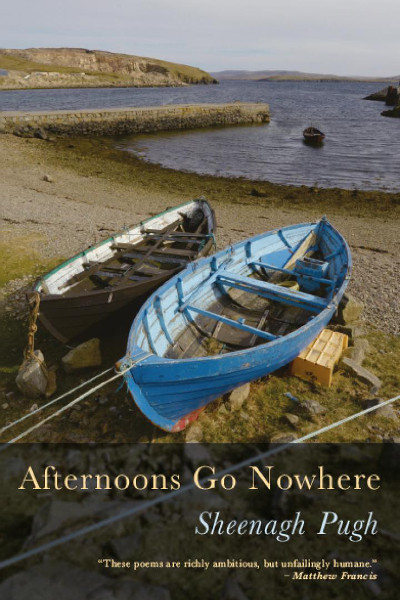 Time, in Sheenagh Pugh’s hands, has a tendency to turn gleefully slippery. In Afternoons Go Nowhere, her tenth collection, Pugh turns her poetic sorcery to humanity, history, geology, nature, and the spaces between all those magical things.

Silken strings of words offer up glorious catches: bewildered kings, harangued statues, a lord’s horse, a  bored husband building cairns, and monks speculating about saints exhale alongside bus passengers “postponing goodbyes”, not to mention glacial water scooping “a hollow in limestone.” In Pugh’s eyes, it seems, each of these has equal gravitas.

Lit by Pugh’s keen gaze, every plant, stone, animal or person has the potential to grow playful or impatient, coy, attention-seeking, or ashamed. Unexpected characters emerge humming tunes that seem familiar, but which curl with their own original lilt.

In short, Pugh’s poetry unearths those traditionally overlooked, allowing us to experience individual quirks, confusions and unfathomable kindnesses for ourselves. One delicious example is The Offering, in which Bishop Thorlock, who has been charged with restoring a possessed sea-cliff for human use, considerately leaves “one slope unblessed,” for the sole enjoyment of “gannets, puffins and cliff-monsters.”

Pugh imbues her words with consistently infectious affection – displaying an anthropological delight in our idiosyncrasies, as well as a linguistic love that equips her to paint civilisations’ heritage with fresh colours never seen before.

In Airline Pilots, a deceptively simple clutch of couplets, Pugh analyses the professional nonchalance of pilots’ tones and takes it from a practical necessity to calm anxious passengers to an admission of glory – “I am acquainted with the sun.” Sublime.

Elsewhere, Pugh alights on a moment as yet unsullied by darkness to come, inviting us to be awed by a mother’s love for her infant son, uncaring that in years to come she’ll “order his eyes put out” to assuage a power-thirst stronger than that love. In Pugh’s opinion, it seems, one act cannot, and will not, reduce the worth of the other.

Pugh’s greatest skill lies in her ability to share a passion for details, as in the title poem Afternoons Go Nowhere, when the seasons change from summer to autumn always comes as a surprises: “Somehow no one is ever quite ready/ for this, as if they half hoped/ time two would let things slide.”

Elsewhere, in Sensory Acquisition,senses failing with age offer up passages of exquisite beauty, as though diminished eyesight and hearing is editing out the mundane: “Speak of paracetamol; he hears Paris in turmoil. A tame housecoat slips its peg, prowls the shadows, an ocelot.”

Pugh is also a magician when in comes to conjuring a sense of place, spooling out not only views but palpable impressions of the locations she loves, most notably Shetland and Canada. In Quarff Gap, the focus is on space itself – “Nothing fills the eye”.

It seems that Pugh is intent on training us to marvel in the small miracles we each overlook each day, to follow nature’s rule and allocate to each of those more commonly lauded a gull for a crown, and rather than mourning our losses, to celebrate what they’ve made way for.

It makes for a hugely cheerful read, during which you’ll find yourself falling in love with the most unlikely of heroes. At these times when so much of what we read, view and experience is overshadowed by future dreads, Afternoons Go Nowhere is a sunlit respite we all sorely need.