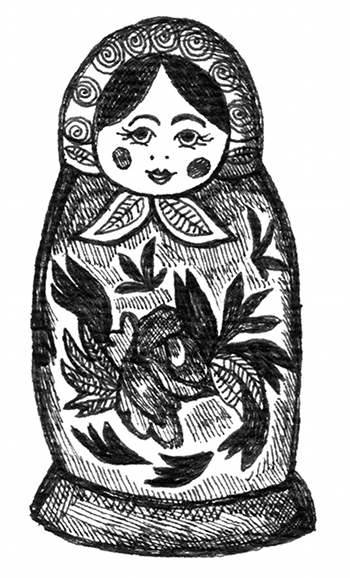 The 12th story in my debut collection Remember Me To the Bees is one of the shortest tales in the collection, Chrysalis.

Just occasionally a story reaches me in the form of an image, which is exactly how this tale arrived. It began with the idea of a child taking the smallest painted doll from a set of matryoshka dolls and placing it in a nutcracker, in the hope of finding something magical hidden inside.

The artwork is by Louise Boulter. I love the way the doll’s eyes look like two little birds with wonderful tails.

A short excerpt from Chrysalis

Ella likes to line the dolls up and place them one after another on her grandma’s kitchen countertop. That way, if she lies her cheek against the cold surface, she can pretend she’s in a forest of painted dolls. They stretch all the way to the horizon, as colourful as tropical flowers or birds, casting shadows taller than giants. The smallest, the un-openable doll, catches the sunlight and blazes like a birthday candle. If Ella tries very hard she can make it lift into the air – fuelled by sunshine and her imagination – and zoom around the ceiling.

Matryoshka dolls, that’s what her grandma told her they were called, and Ella repeats the unfamiliar word to herself like a magic spell: matryoshka, matryoshka. As she says it, she feels like she’s making something happen. Granddad used to get her to repeat strange words like that to help him do his conjuring tricks. “Repeat after me,” he’d say. “Verucca, pertrucca, kertrucca.” And then he’d open his hands and the coin would be gone, or would have appeared, glowing against his greyish wrinkled palm like a solid spot of sun. She had a feeling he made up some of the words, but she didn’t know all the words yet, so she couldn’t be certain.

These days he doesn’t do magic tricks any more. Doesn’t do anything much. He just sits in his chair in the corner of the living room making strange noises now and again that make Ella jump, sort of harrumphing sounds with a wet, sticky finish. Ella cringes when she hears them, but Grandma just murmurs: “Oh dear” and goes over and wipes his chin.

Sometimes, when he opens his pale blue eyes and seems to be watching her, Ella will kneel down beside him and whisper, “matryoshka, matryoshka”, and close his fingers around the smallest doll, just for a moment. Sometimes when she does this, his lips twitch like he’s about to smile. 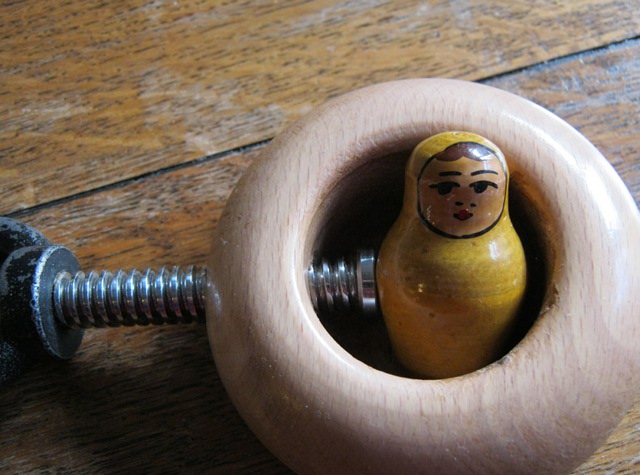