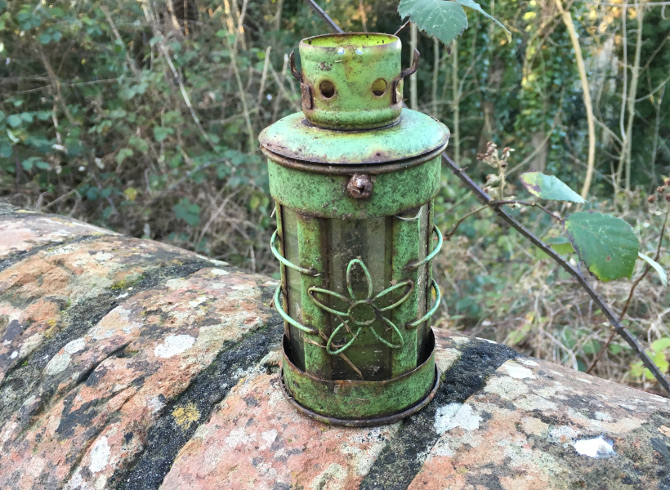 This small lantern was sitting abandoned on a wall in a local cemetery. Something about its squat, green slightly rusted trunk appealed to me.

Then I realised I was seeing this inanimate object as a character. A little robot, to be exact. With four arms, and possibly two feet tucked away underneath, a somewhat beetle-y, forest robot.

And there, a story began to sprout, running away in my imagination. Could he be a man-made robot gone feral? Perhaps he spends his day foraging and gathering vital resources (but what might those be?), or perhaps he’s solar powered! What risks could he face? I suspect priorities include trying to keep out of the rain to avoid further rust, and avoiding the squirrels, roe deer, dogs and cats that could potentially cause him mischief.

What object, seen askance, might prompt a fantastical work of fiction in your mind?

If you write or create something prompted by this, please send an email to judydarley (at) iCloud.com to let me know. With your permission, I’ll publish it on SkyLightRain.com.