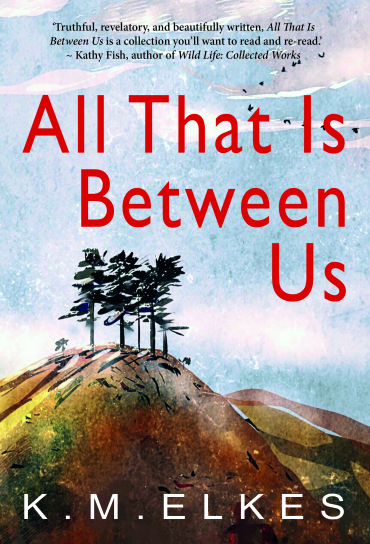 Warning: the intimacy in this book sneaks up on you, so that you’re living between the lines before you’ve had a chance to consider the implications – that if you do this, you’re going to empathise. You’re going to feel.

It’s a trait of K.M. Elkes’ writing that’s impossible to avoid. He draws you in with humour, and with exquisitely visual writing, until suddenly you realise you’ve become the character pressing their ear “against a window to feel the vibrations of trains and the deep, deep breath of the city”.

That’s a rare talent, most visible in this collection, perhaps, in You Wonder How They Sleep, in which the lines above appear.

In this collection, his debut (remarkably, it feels he should already have a shelf-ful of own-works), Elkes not so much invites you into other lives, as commandeers you: for the time it takes to read one of these brief flashes, or one and the next, and the next – as they’re addictive – you are immersed. You breathe the air his characters breathe, and ache exactly where they ache.

Elkes’ elegance with language is vivid throughout, frequently offering fresh terms on which to understand the world – “the buttery tang of trodden grass”, an old book with “the edges of its pages the colour of beer”, taxi cabs “yellow as a smoker’s finger.”

Picking a favourite story seems cruel, like choosing between a class-full of children, but inevitably one charmed me with its wit, its pathos and the ecological truth underpinning its fantasy. The King of Throwaway Islandis a love story in which the tale itself is being written by the protagonist repeatedly and released in plastic bottles from the island of refuse he’s been shipwrecked upon. “My island gets a little smaller ever time I send you a letter. But I stay confident – that’s part of the new me.”

In Swimming Lessons, an overbearing dad battles the ingrained hurt inflicted by his own father. Fathers crop up in many of the stories, often cruel, usually misguided, occasionally striving to do their best, and, at times, succeeding.

In Three Kids, Two Balloons, Elkes takes a passing moment and harnesses it in a way that somehow manages to be funny and moving and powerful. Hints of flippancy here, as in many of the stories, are deceptive, as beneath each is a bolt of such tenderness that you’ll be stopped in your tracks.

It’s intriguing that by fixing our focus firmly on the people at the heart of each tale, the stories themselves swell outwards, so that the details chosen to depict place and time become transferable across countries and, to an extent, eras. Loss is perhaps the most universally recognised emotion, and Elkes has the ability to make every situation he turns to infinitely relatable.

In that sense, the collection’s title rings with particular resonance – chiming with the awareness that in fact all that is between us are the things that make us human, which means that time, location and circumstance matter far less than our responses to the situations we find ourselves within.

All That Is Between Us by K. M. Elkes is published by Ad Hoc Fiction and is available to buy here.