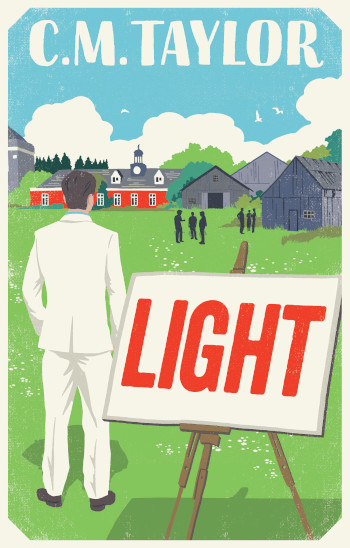 Taylor specialises in pithy descriptions. Ben notes: “My father had a long and slender nose along which his glasses would travel”, and conjures Jessica in two lines about her smile: “It was a burnished and slight smile, inviolable and moneyed. A smile which knew its strengths.”

Line drawings offer impressions of the abstract art on show and contribute to the playful aspect of the story. While characters pose for art, or view art, or discuss art, or simply pose, there’s a sense of them skirting around things – possibly around life. Seen through Ben’s eyes, it’s evident that they avoid the troubles of everyday living simply by being rich, and ignore the sorrows clawing at their hearts by pretending they haven’t noticed them. It seeds tension through the narrative.

Meanwhile, Ben discovers the tangible by embracing his new role as gardener.

“Each time I puncture the earth with the spade’s sharp cleat, I jolted. It was a surprise – I was affecting a change in the physical world. To lift the earth, to see it move, to see an effort correspond so directly to a result, was weird.”

It’s as though we’ve entered a parallel world where everything is simultaneously unreal and disturbing hyperreal.

Reunited with countryside vistas, Ben recovers the peace he took for granted in childhood but lost in the excitement and fizz of London. “The huge and empty fields did not declare or demand; they inquired perhaps. The fields allowed you in.”

And what of the elegant, seemingly simple one-word title? At times, Ben rhapsodises about the wonder of different kinds of light, and there’s a sense of light and darkness jostling within some characters, not least lonely Will who confesses at one point: “When I wake up I just think about killing myself. Every day I just think ‘Today’s the day’, but I know if I get up and see the boy or that stupid f*cking sun then I won’t be able. So I try to hold the boy. The trees here are so beautiful.”

This book is a portrait of a time when the world was going a little mad for the new novelty of the online world, with the art world responding with ever more striking oddities, but it’s also an homage to a time of more innocent pleasures.

Yet truly, at its heart, this is a story about the light friendship can cast over us, and the lengths we’ll go to in a bid to protect those we love, whether that’s buying them a suit and pretending it’s secondhand or covering up an accidental criminal act.

Light by C.M. Taylor is published by Retreat West Books and available to buy here.