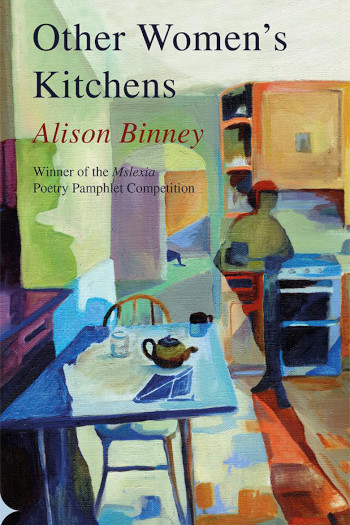 The winner of the Mslexia Poetry Pamphlet Competition 2020, the 23 poems in this small but powerful volume capture the frustrations of being gay in a straight-centred world, but also the joys to be found in understanding who you truly are and having the courage to seek and accept love.

Opening with a prose poem titled The way you knew, Alison Binney speaks of the utter innateness of self-knowledge with a light yet poignant touch that rings throughout the pamphlet, making you smile while simultaneously feeling your breath catch in your throat.

Keeping the tone buoyant, Binney launches into Lesbianism by numbers, which resembles a found poem pieced from click bait: “9 awkward things that happen when you’re the only lesbian at work (…) 16 lesbian power couples from history who got shit done…”

The L word digs deeper at a soreness rubbed raw by a thousand unthinking comments and slurs as a child deciphers clues about her own nature. The quietly emotional response to the ‘L word’ of the title spoken as an insult reveal a quiet, burning shame that’s deeply moving: “Later it flicked like a spitball/ from the back of the class, and slipped down the nape of my neck./ If you wiped it away they knew it had stuck./ I kept it under my tongue like a piece of old gum/ brought out to chew in the dark…”

In other poems, Binney explores how the introduction of gay characters in familiar soaps opened up gateways for discussions, and how haircuts offer chances to declare or disguise.

Every time I came home looks at how we compare ourselves to others and find ourselves lacking, even when what they have isn’t necessarily what we want. It also contains the line about other women’s kitchens, which forms the pamphlet’s intriguing title.

How we knew feels like a conversation with the emerging awareness of The way you knew, answering with the reassurance of love to come. Everyday ordinariness shines when lit with these lines: “And when/ you admitted you’d flirted from your end/ of the tennis court the whole summer,/ and I confessed I was too short-sighted to see.”

This is the daredevil vulnerability of choosing to speak of feelings, and open our arms and hearts. A delightful, affirming read.

But more courage will be required, as lampooned in Everyday heterosexual predicaments, a pair of poems set far apart, one with a focus on soap operas, the other on mini breaks. Each artfully flips our assumptions and thereby highlights how easily we take it for granted that heterosexuality is seen as the norm, rather than the ‘other’.

Highlights abound in The gay woman composes a rainbow poem, which features the vivid line: “Orange as the courage/ of a woman’s tie”, and When we hold hands, a tender yet defiant poem that reminds us of the potentially perilous declaration of choosing to be seen by unknown strangers as “dangerous dykes.”

One of my favourites in the pamphlet is Exposure, inspired by a comment from an MP who states that parents should be able to choose when their offspring have the existence of gay people revealed to them. This comment suggests, disturbingly, that being gay is a quality in line with unicorns and phoenixes, or that gayness is an idea to be protected from. Binney’s perfectly balanced poem addresses the ludicrousness of this caution, with lines warning of the symptoms resulting from “accidental exposure”: “curiosity, empathy, loss of prejudice.”

It reminds me of being asked by my niece the meaning the word homosexual, and explaining (aware of her parents listening intently), only to have her respond, “Oh, like Josiah’s mums.”

The poem ends with a killer couplet on the services that will be resumed when the child is old enough to handle the revelation: “teaching, guarding,/ entertaining, serving and nursing…”

There are no cliches here, only heartfelt truths, often shared with humour, on the hard-won empowerment that comes with speaking, and coming, out when much of the world still advocates self-censure.

Other Women’s Kitchen’s by Alison Binney is published by Seren Books and is available to buy here. It won the Mslexia Poetry Pamphlet Competition 2020.

Seen or read anything interesting recently? I’d love to know. I’m always happy to receive reviews of books, art, theatre and film. To submit or suggest a review, please send an email to judydarley (at) iCloud.com.