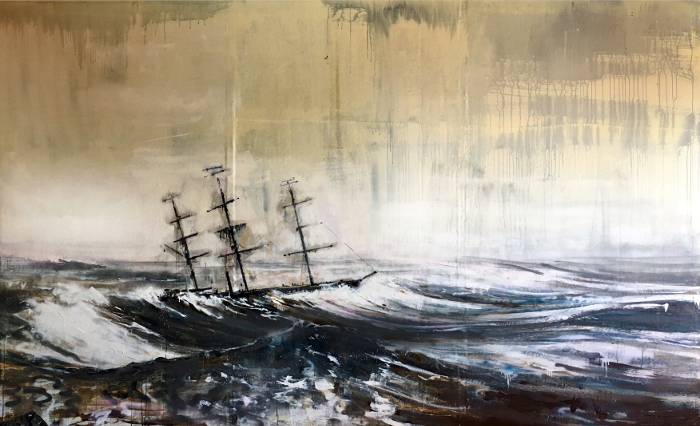 The urge to communicate is key to any artistic endeavour, but for the work to truly connect with others, it helps for artists to look beyond themselves and be moved by the world around them. In 2016, artist Antony Garratt achieved this with his painting installation High and Low.

His 2019 project returns him and his team to Anglesey’s wild spaces, this time looking out to sea.

In October 1859, The Royal Charter, a steamship en route to Liverpool from Melbourne was wrecked in the Irish Sea off Anglesey in a ferocious storm. It’s estimated that 800 lives were lost in the storm, which was coined ‘The Royal Charter Storm.’

“The Royal Charter is legendary on Anglesey, not least due to the heroic efforts of locals from Moelfre who attempted to rescue crew and passengers,” he says. “In a dreadful twist of fate, the ship was carrying a cargo of gold and many of the people on board had sewn gold into their clothes. Upon entering the sea, they were immediately committed to the seabed.”

The tragedy of the Royal Charter Storm led to the development of the meteorological office, with the first gale warning service being launched in 1860 to prevent similar catastrophes.

Anthony and his team, enabled by the Outbuildings, Anglesey, and shipwrights Mark and Loz Cann, are creating a painting and theatrical installation titled To All At Sea, or, in Welsh, ‘i barb ar y mar to mark the160th anniversary of the storm. 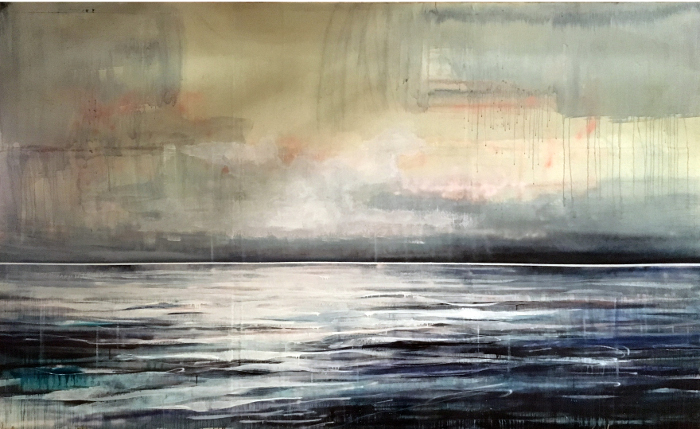 Collaborating with the wind

The work will comprise a 4.5-metre-wide double-sided painting panel with a black steel foresail shaped to echo the rig of the royal charter. It will be located in a coastal position near to the location of the wreck off Moelfre, East Anglesey, on 13th May.

“I have just completed the two sides of the painting – one of which communicates a calm, foreboding day at sea; the other the gale which tragically wrecked the Royal Charter amongst many others that fateful night,” says Anthony. “I created the two paintings in my studio over two months; the time it was meant to take the Royal Charter to reach Liverpool from Melbourne.”

Like a weather vane, the painting panel will pivot on a central mast with each change in wind direction. As a result, chance will dictate whether you see the depiction of the calm day, or The Royal Charter Storm, “just as the weather was a form of roulette on that fateful night, before the days of weather forecasting.”

Now we come to the really clever bit

With each pivot and change of direction in the wind, the painting panel communicates data to a website, which each day at 17.55, (the time of the UK Shipping Forecast), draws an arc representing the change in wind direction.

After two months of these ‘wind arcs’ being collected, the lines will be translated into a musical score to be performed and recorded by concert violinist Philippa Mo, accompanying a local Welsh male voice choir.

The performance and culmination of the installation will take place on 26th October, the 160-year anniversary of The Royal Charter Storm.

The installation and composition will be dedicated to those who lost their lives in the storm and rescue efforts.

An art competition will run concurrently with the installation and dedicated social media channels for the entrants to share their work. The subject will be the weather forecast and The Royal Charter Storm. Prizes will include a day creating a painting with Anthony Garratt to keep.

Find out more about all of this at www.toallatsea.co.uk.