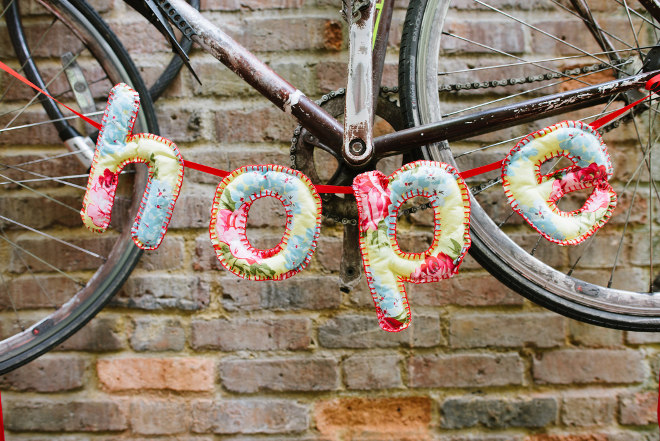 Have you heard about Unbound? They’re a rather ingenious new kind of publisher. They’ve already attracted the literary talents of Salena Godden, and are now jumping up and down in support of craftivism queen Sarah Corbett.

The way it works is: an author pitches an idea for a book, then you, the potential reader, can choose whether or not to make a donation towards the completion and publication of that book.

In return, you receive a beautiful e-book, paperback or hardback copy of the finished book, depending on how much you pledge. You also get access to ‘the author’s shed’, showcasing their progress and offering insights into the process of putting the book together. 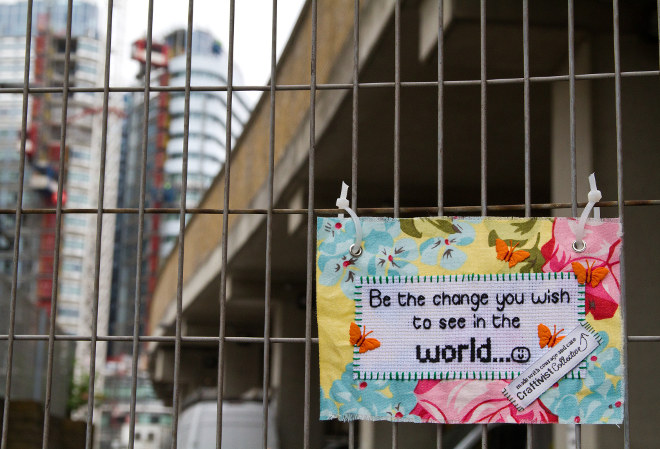 Sarah’s book is How to be a craftivist: the art of gentle protest.

Sarah’s been running Craftivist Collective since 2009, tackling issues ranging from climate change to the businesses failing to pay employees a living wage.

“My approach to Craftivism is to tackle issues not with anger and shouting, but with gentle protest. Gentleness is not weak, it requires self-control in the face of anger, injustice and sadness. Gentle protest lets us have conversation instead of an argument, debate instead of shouting, and collaboration instead of opposition.” 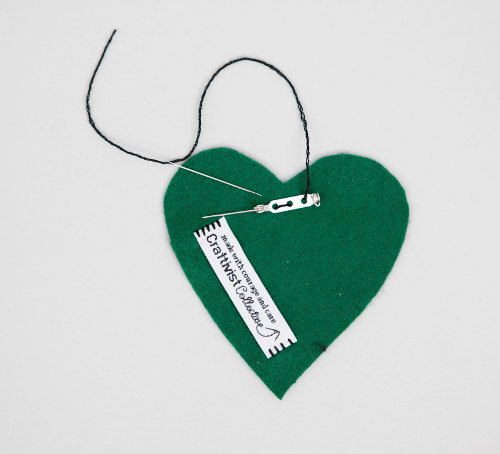 Sarah vows that her book will get to the heart of Craftivism – the purpose, process and pitfalls. Areas it will cover include:

1. How to use the process of making to engage thoughtfully in the issues you care about.

2. How to see every detail of your creation as important: from the colour you use to the fonts, the size, the messaging….

3. How Craftivism can engage people on and offline around the world.

4. How Craftivism can create conversations and action.

“Gentleness, conversation and collaboration can make our world a better place, and the road there less angry, aggressive and divisive.” 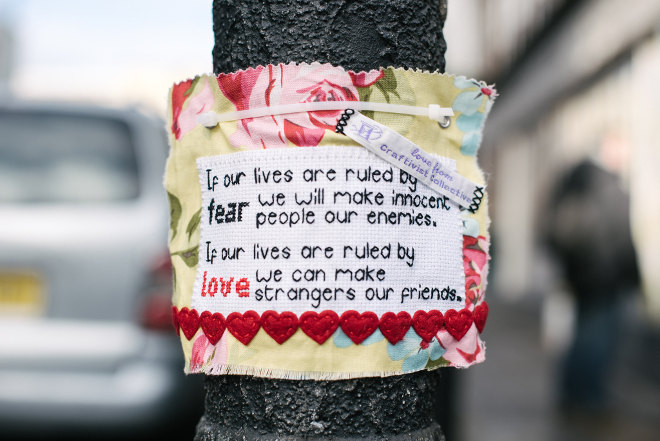 Find out more and help Sarah on her way to making her book a reality at unbound.co.uk/books/craftivist.

Find out more about Unbound here.

With art funding continually diminishing, getting a creative endeavour off the crowd now requires a whole new set of skills – negotiating the arena of crowdfunding! I think it can be a really positive way to launch a new endeavour – true democracy in action as anyone with a pound to spare can choose to make a big difference to their cultural landscape!

I spoke to Pete Sutton of North Bristol Writing Group to find out how they’re engaging with Bristol-based Fundsurfer in the hope of funding their debut anthology.

“North Bristol Writing Group (NBCWG) was started by Jemma Milburn a couple of years ago,” says Pete. “I joined shortly after and helped the group to grow due to my work for Bristol Festival of Literature. We meet once or twice a month on a Thursday night at the Inn on the Green at 19:30. We’re happy to have new members. Drop us a line at northbristolwriting@gmail.com or join our Facebook page for the latest updates.”

Decide on your goal

The North By Southwest anthology is a collection of 15 stories by ten writers, illustrated with artwork by Claire M Hutt.

The first step was choosing a title.

“Ian Millsted, one of our writers, came up with the title when we were brainstorming ideas. We wanted something that was evocative of both the group and the geography.”

Cary Grant (who was born and grew up close to Bristol) was mentioned and the title, a play on the Hitchcock film North by Northwest was quickly born.

Next, the writers had to produce the tales that would fill the collection.

“Once we’d decided on the title and a loose theme we set the writers off to write their tales,” Pete says. “Every member of the group was given the opportunity to bring up to three stories or up to a set word limit. We’ve spent the last few months polishing all of the stories through critique sessions and we now have editor Joanne Hall, who is adding that final edit to bring them up to professional quality.

Claire M Hutt’s artwork will be a crucial part of the finished product. “I approached Claire M Hutt because I admire her artwork and she’d done some work for Far Horizons (a magazine I help edit). Claire has been enthusiastic about the project and is providing the cover and individual art work for many of the stories despite being super-busy.”

Work out how to fund it

“We knew we wanted to do an anthology and we looked at all of the options: approaching a publisher, doing PoD with Lulu, KDP or Createspace, and crowd funding,” says Pete. “Then Amy Morse ran a successful Fundsurfer campaign to get her book Solomon’s Secrets published. I approached Richard Jones from Tangent Books and he very kindly offered to help publish the book if we could pay for the typesetting, design and printing thereby providing the book at ‘cost’. Once I had this offer, crowdfunding seemed like the logical way of going about things.”

With the information from Richard, the group set their target amount at £2,000.

Having an artist on board also assisted with an important incentive for potential funders – the rewards.

In the case of the North By Southwest anthology Fundsurfer campaigns, potential contributors can choose the following:

And so it goes on, with ever grander and more personalised rewards. Tempted?

“The rewards are all important,” says Pete. “We started with a list of around fifteen and whittled them down. I thought choice was paramount but apparently the fewer rewards the better! We had a session over a pint or two and all came up with things we could give away and the ones on the page made the cut. Pretty much all of the rewards are things we can easily provide.”

Put your crowdfund page together

Your page is all important – it’s how people will a) find out what you’re trying to achieve, and b) decide whether they want to get involved. In addition to the rewards, you need a description, which Pete wrote with suggestions from the group, and (a vital part of it) the video.

“The video was the most difficult part of creating the Fundsurfer page!” Pete admits. “We had a session dedicated to creating it but in the end, due to technical difficulties I ended up putting it together on my laptop alone, but using some of the audio we’d recorded.”

This included story extracts read by their authors. “I read a bit from Christmas Steps,” says Pete. “Desiree Fischer reads a bit from Taxi Driver, Roz Clarke reads from The Noon Train, John Hawks-Reed reads a bit from Miss Butler and the Industrial Automation Group and Kevlin Henney reads from Like Giants. All of the photographs in the video (apart from the elephant) were provided by Kevlin Henney.” 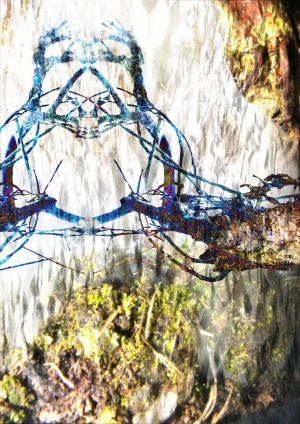 No crowdfunding campaign can run indefinitely, and the North by Southwest page closes on Friday the 12th of December, 2014. This means you have a small window in which to let everyone know what you’re up to and how they can help, spreading the word as widely as possible.

And as seems to be the case with all crowdfunding options, if the financial goal isn’t met, all funds will be returned to their pledgers.

In which case it’s time for plan B.

Pete wants to draw one final thing to our attention. “We’ve got a celebrity endorsement which is entertaining and worth highlighting.”

To whom it may concern,

This prepatent publication features the work of several persons it is my great misfortune to know. Indeed, I have already been acquainted with some of the stories. I must warn you, if you help fund this anthology, you will be instrumental in unleashing a collection of splendid fiction upon an unsuspecting public. Is that what you want? Do you really wish to be forever associated with a “good read”? An “enjoyable collection of eclectic tales”? When you dangle your grandchildren on your knee in some distant time, do you really want the trusting poppets to ask of you, “Grandparental unit, what did you do during the North by Southwest fundraiser?” and for you to have to turn your face to the wall and sob, “Gods forgive me, offspring-of-one-remove, but I donated!”

Think on, that is all I ask. Think on.

You can contribute to the  the North by Southwest Fundsurfer page here.